Intuition of the Universe 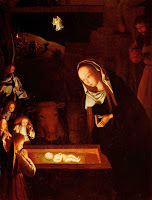 And in that region there were shepherds out in the field, keeping watch over their flock by night. And an angel of the Lord appeared to them, and the glory of the Lord shone around them, and they were filled with fear. And the angel said to them, "Be not afraid; for behold, I bring you good news of a great joy which will come to all the people; for to you is born this day in the city of David a Savior, who is Christ the Lord. And this will be a sign for you: you will find a babe wrapped in swaddling cloths and lying in a manger." And suddenly there was with the angel a multitude of the heavenly host praising God and saying, "Glory to God in the highest, and on earth peace among men with whom he is pleased!" When the angels went away from them into heaven, the shepherds said to one another, "Let us go over to Bethlehem and see this thing that has happened, which the Lord has made known to us." And they went with haste, and found Mary and Joseph, and the babe lying in a manger. And when they saw it they made known the saying which had been told them concerning this child; and all who heard it wondered at what the shepherds told them. But Mary kept all these things, pondering them in her heart.

There are many surprising and extraordinary aspects of pictures but the one I want to point you towards today is that the element of choice present when you encounter, say, a book, where you have to choose to open and read it is, in the case of a picture, wholly bypassed. (Something of this could also be said about music of course . . .)  Something of the image is in your head before you know it and can do anything about it. True, you may choose to cover your eyes if what you are experiencing is felt by you to be disturbing but you can only make that choice after the fact; you are by then cutting out a sight you are currently experiencing. Likewise, if one experiences a positive response to the picture then this, too, is felt without choice.

In a moment I'm going to relate this thought to our Advent journey via Geertgen tot Sint Jans' painting of c. 1490 called 'Nativity at Night'

But, first, holding this particular kind of lack of choice in mind, we can make a few reflections on the general nature of faith. Tolstoy thought that true faith was not something concerned with factual beliefs which related to what some person thinks are empirical or quasi-empirical states of affairs but, instead, faith is something that springs quite naturally from that person's particular 'position in the world'. In his essay 'What is Religion, Of What Does its Essence Consist?' Tolstoy says:


A person acts according to his faith, not as the catechism says because he believes in things unseen, nor because he works to achieve things hoped for, but simply because having defined his position in the world, it is natural for him to act according to it (p. 97).

What Tolstoy means by a person 'having defined his position in the world' is the state of affairs which is the totality of a person's upbringing, cultural context, education and natural inclination. That may be a changing thing but one can only ever encounter the world from that totality. Remember we don't choose most of the things that make up this totality but without them we would not be enabled to reflect upon the world and make any meaningful choices at all.

As far as each individual is concerned this 'position in the world' is the only 'place' in the world and all that they see and feel about the world naturally flows from it.

All these contingent aspects which make us what we are and enable us to act in the first place form the 'thing' Tolstoy calls 'faith'. Without this unchosen givenness we all experience even the empirically based natural sciences could not have developed. As Tolstoy notes:

The point I am trying to make very present to us is that this basic FACT of existence - our only relationship with the universe - is what Tolstoy (and also Wittgenstein who echoes Tolstoy in this) thinks should be called 'faith.'

Now what might all this have to do with our reading about Mary and Geertgen's painting of the Nativity at Night?

Well, if we look at Mary's response to the things she experienced (and it matters not whether they were actually the self-same things mentioned by Luke) it was to 'ponder them'. Although it is clear that Luke in his Gospel is busy making many theological points - ones with which we may agree or not - Mary does not do this. Rather she is reported simply as looking at all these things and pondering. Despite Luke's, and later instituionalised Christianity's, best efforts to the contrary, he captures for us a moment of pre-reflexive faith or religion.

As the well-spring of liberal Protestant thought, Friedrich Schleiermacher, put it in his On Religion - Speeches to its cultured despisers:

Later he memorably states that:

. . . intuition of the universe . . . is the highest and most universal formula of religion on the basis of which you should be able to find every place in religion, from which you may determine its essence and its limits (p. 24).

Geertgen's genius is to put this moment of pre-reflexive intuition in Mary's life before us in such a way that we, too, are invited to engage in a similar activity.

We are not, and this is important to realise, being invited by Geertgen to look at his painting and to ponder *that* as an object d'art. Nor are we being invited to accept any of the dogmas of the late-medieval Catholic church. NO! Geertgen is inviting us to visit the Christ-child ourselves. Notice that in the foreground of the picture there is only black space - there are no characters present. He did this, of course, quite deliberately in order to make a place for each of us by the crib.

Such a meditation of the nativity is NOT to engage in theology, philosophy or science but only to be brought to a keen awareness of the necessary pre-reflexive primary encounter with the world that constitutes Being itself and upon which, for us, everything else 'stands'. The contents of the painting which, when said by Luke (and Matthew) become theological, are shown by Geertgen and we are enabled to see 'behind', as it were, the later theology to a basic fact of human existence - that in such pre-reflexive encounters with the world our relationship to the universe is established.

My job as a minister of religion at this season is, like Geertgen, simply to encourage you to the edge of the crib and to get you to start in the right place - that is to say at the beginning before there was theology, philosophy and science and on the basis of this encounter begin to ponder and wonder yourself upon all these things as Mary did; but I hope it is clear that 'standing by the cribside' stands here as a metaphor for being prepared to stand where you are and genuinely open yourself to Nature herself so as to 'overhear the universe’s own manifestation and actions.'
Email Post
Labels: East of England Faiths Council Friedrich Schleiermacher Geertgen tot Sint Jans institutional religion Luke Nativity pre-reflexive Tolstoy Wittgenstein wonder
Andrew James Brown
I'm a minister in Cambridge (UK) on the roll of the General Assembly of Unitarian and Free Christian Churches with sympathies towards a contemporary Lucretian inspired religious naturalism, new materialism and Christian atheism. Photographer, cyclist, walker, ex-jazz bassist.

Yewtree said…
Looking at the picture, I can just about do as you suggest, allowing my emotional response to the image to preclude theological thoughts about its subject - but only for about 5 seconds.

It's a beautiful picture and I like the expressions of wonder - perhaps even shock - on the faces of the onlookers.

Interesting exercise. It's about time we in the West stopped making words the primary focus of our religious traditions. Though we should still apply the test of reason to our faith, we spend too long talking about the twiddly bits and not enough time standing in silent awe before the great mystery (and my comment applies to all western religions, not just Christianity).
7 December 2009 at 17:21 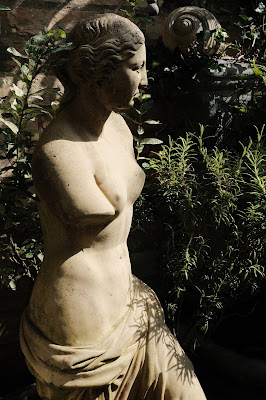