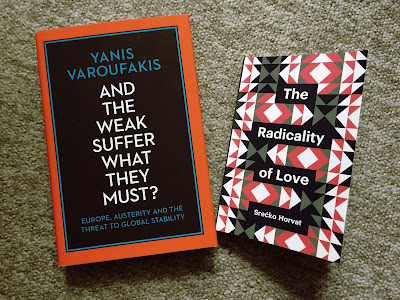 Four of us from the Cambridge DiEM25 DSC met on Wednesday to decide what we’re going to do next.

Firstly, it’s worth saying that, since we are small in number, we decided that we would not, ourselves, organise any referendum related event but commit to being involved with existing Remain campaigns of which there are a number active in Cambridge. As a whole, the Cambridge City area (where we are based) seems to be behind the Remain campaign and this may might explain why we have not (yet!) gathered a very large group (in total we have thirteen people on our email list). Nevertheless, to do a little bit more we did get hold of some materials from the “Another Europe is Possible” campaign and we’ll distribute them in the immediate locality.

We also decided to try and figure out something we could usefully do after the referendum regardless of whether Britain votes in or out and came up with the idea of starting a “Democracy Café”. Some of you may be aware of an initiative that started in the USA called “Socrates Café” and we thought it would be worthwhile taking the basic idea and use it to work conversationally through the various elements of the DiEM25 manifesto in some convivial surroundings. Naturally, if we remain in the EU this conversation needs to be had in the context of democratising the EU, however, should the vote (the gods forbid) be for leave (and on the dreadful ticket that the leave campaign has been promulgating) it is clear that the need to democratise Britain will be equally as pressing and the heart of the DiEM25 manifesto would remain relevant and highly useful.

So, watch this space in September/October. Any thoughts from folk on a suitable venue?

The second thing we thought we would work towards — but probably only in the event of a remain vote — is to try and organise an event centring on the DiEM25 Manifesto which we’ll pitch to the Cambridge University Festival of Ideas which takes place in October.

Lastly, the four of us realised that whether or not we leave or remain a group committed to the aims of DiEM25 is important as it can provide philosophical, intellectual and moral support to folk such as us. Again, whether we leave or stay, meeting together in good company and surroundings to discuss democratic ideas is something we think is vitally important. We certainly thought it would be good to continue to meet to read together both Yanis Varoufakis’ book, “And The Weak Suffer What They Must?” as well as Srećko Horvat’s book “The Radicality of Love” (as I’m sure most of you realise Srećko jointly launched DiEM25 with Yanis back in February at the Volksbühne in Berlin):


After a loveless and occasionally hate-filled referendum debate such as the one we are having it is clear that, without the radicality of love supervening, we are in for the hardest of times.

“A truly revolutionary moment is like love; it is a crack in the world, in the usual running of things, in the dust that is layered all over in order to prevent anything New. It is a moment when air becomes thick and at the same time you can breathe more than ever” (Horvat, p. 4).

So, yes, the radically of love is needed and if you’re interested in getting involved please get in touch.

If you are interested here is Srećko Horvat’s recent TED talk, "Love has to be reinvented"