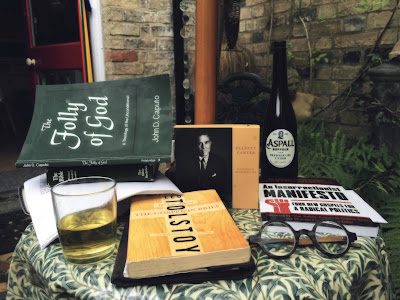 So, I'm well into my last week of my sabbatical and I've been using it to read John D. Caputo's terrific "The Folly of God: A Theology of the Unconditioned" and also, to my mind, an important book with strong links to Caputo's  thinking, "An Insurrectionist Manifesto: Four Gospels for a Radical Politics" by Ward Blanton, Clayton Crockett, Jeffrey W. Robbins, and Noëlle Vahanian.

As well as that, as the photo shows, I've carried on reading Tolstoy, been re-listening to some of Elliott Carter's music (as well as that of Henry Cowell) and drinking the odd bottle of Aspall's lovely Suffolk cider. Each of these activities contains more than their fair share of insurrectionary content!

So an "Insurrectionist Theology" speaks powerfully to me and I have no doubt that it will be helping to inform a lot of what I'll be exploring with the Cambridge congregation in the next few years. So, as an allusive taster to that, here is the authors' outline of in what such a theology consists:

1) A filiation with the tradition of radical theology, which includes a never-ending reflection on the many and multiple "deaths of God" of the inherited traditions.

2) An ontology of the Real that is for us always linked to the theorization of Jacques Lacan and Gilles Deleuze, and elaborated as well by Slavoj Žižek and François Laruelle.

3) A theological materialism that affirms material reality in nonreductive ways, recognizing the valencing effect of ideas that must still be called "vital." This materialism would be a plastic materialism, following Catherine Malabou.

4) A commitment to a leftist political edge that nevertheless eludes dogmatic certainty—ours is the struggle with and within the world for an ethical-ecological vision of Life beyond money, greed, power, and devastation of neoliberalism and corporate capitalism.

5) An experimental theology in which everything is up in the air, staked and at stake, a politico-theological laboratory formulating new tests for a theology that is always en procès (in process/on trial, to use a term from Julia Kristeva).