Exhaustion Café?—A piece for the DiEM25 goup in Cambridge 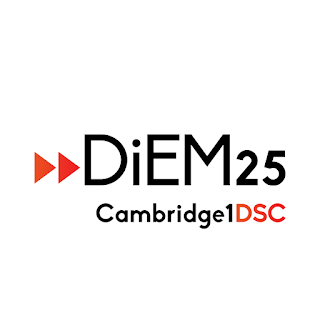 In his book “Infinitely Demanding: Ethics of Commitment, Politics of Resistance”, Simon Critchley notes that, although many people have claimed philosophy starts in wonder, for him it begins in disappointment. The two areas in which this disappointment manifests itself that particularly interest Critchley in this book are religion and politics; as a minister of liberal religion with leftist political commitments myself these two areas are naturally of particular interest to me too.

As the (accidental) convenor of the DiEM25 in Cambridge group I speak of disappointment in this post for two immediate reasons. The first is, of course, the huge disappointment I (and other DiEMers) are feeling following the result of the EU referendum here in the UK. It is a disappointment that has left many of us feeling exhausted.

The second is that, in the aftermath of the referendum, it has so far proved impossible to organise anything in Cambridge under the DiEM25 banner. Oh, to be sure, the Facebook pages gets its modest share of likes and some of those same people have indicated that they are interested in meeting together as and, even say they are coming to a meeting, but that’s where it ends and so, last Wednesday, I and two other DiEMers (Jonny and Graham), once again found ourselves sitting in a room with no one else present. It was, it has to be said, very disappointing. But, as Critchley’s words suggest there is disappointment and disappointment.

Clearly, disappointment can be the trigger for nihilistic despair and blame-attribution (there's a lot of that going around at the moment), but it can also be the immediate trigger for something more positive, for a new kind of thinking that is prepared to look for a creative way to use the disappointment and exhaustion the three of us in the room (and, we may suppose, the no-shows) felt.

At our meeting on Wednesday it was this latter response that we chose self-consciously to adopt and we began to centre our conversation — eventually reconvened at the local pub — on exploring something suggested by the Italian philosopher, Franco “Bifo” Berardi (who, as many of you will know, is an active supporter of DiEM25— see HERE and HERE).

Berardi feels that, today, “Social movements should focus on a founding myth of European history: the myth of energy.” He wants us to do this because “Capitalism is based on the exploitation of physical energy, and semiocapitalism has subjugated the nervous energy of society to the point of collapse” (all Bifo quotes in this post can be found at this link),

In all areas of modern European culture (including liberal religious and leftist activist circles) exhaustion is seen as a thoroughly bad thing. This is because, as Berardi notes, “[t]he notion of exhaustion has always been anathema to the discourse of modernity, of romantic Sturm und Drang, of the Faustian drive to immortality, the endless thirst for economic growth and profit, the denial of organic limits.” But, despite this cultural denial, as most of us are only too well-aware, examples of burn-out are to be seen everywhere. Indeed, nearly every week in both my religious and political roles, I find myself talking to someone who has been brought (or brought themselves) to the point of utter exhaustion and collapse.

We all struggle about how to deal with this this because “[e]xhaustion has no place in Western culture.” We’re all supposed to pretend we’re not really exhausted because if we do so admit this we (rightly) fear we may lose our jobs, our status, our sense of meaning and purpose. When we cannot pretend any longer, we’re forced to “take time-out” (often in very bad ways), hoping against hope that we’ll somehow be able to get some energy back so we can throw ourselves into the maelstrom once again. The vicious cycle never seems to end.

This refusal (inability?) to find a creative place for exhaustion has become, as Berardi realises, “a problem, for exhaustion now needs to be understood and accepted as a new paradigm for social life.” Berardi’s belief, which I’ve come to share with him, is that the “cultural and psychic articulation [of exhaustion] will open the door to a new conception of prosperity and happiness” and that “[t]he coming European insurrection will not be driven by energy, but by slowness, withdrawal, and exhaustion. It will be the autonomization of the collective body and soul from exploitation by means of speed and competition.”

I find Berardi’s thinking powerfully persuasive but it is a hard to persuade other, traditional, leftist activists to take this seriously, not least of all because it means that “[t]he prospect of a revolution is not open to us.” This is because, as Beradi points out,

“The concept of revolution no longer corresponds to anything, because it entails an exaggerated notion of the political will over the complexity of contemporary society. Our main prospect is to shift to a new paradigm not centered on product growth, profit, and accumulation, but on the full unfolding of the power of collective intelligence.”

So, as we sat in the pub, enjoying a pint or two over a slowly unfolding conversation, we asked ourselves, if it is true that old-school, revolutionary activity is no longer available to us, should we not simply acknowledge our exhaustion and find a way to let it help us to the full unfolding of the power of our collective intelligence? Perhaps instead of a “Democracy Café” (which we explored when we last met) should we facilitate an “Exhaustion Café” where we could admit these things to each other in such a way that our collective intelligence might, just, have a chance of being re-created?

Perhaps we’ll do it but, as we drained the last dregs of our fine ale, our final decision was to give the Cambridge DiEM25 DSC one more chance to get on it’s feet and, to this end, we’ll arrange another meeting for the end of September or the beginning of October. We’ll advertise the date, time and place here on this site so keep your disappointed and exhausted eyes peeled . . .

With the warmest of wishes as always,