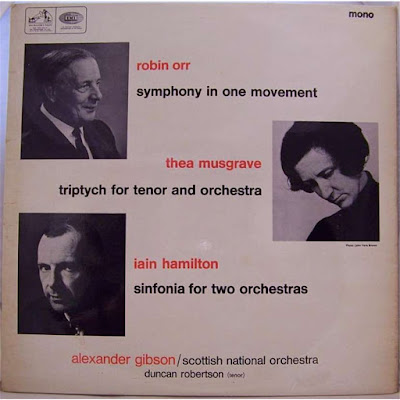 After last month's wonderful sojourn in Unst, Shetland and then Edinburgh I find my mind and aesthetic mood still orientated to the far north of the British Isles. Because of this I'd been following up on a few Scottish composers whose work I had never heard. The stand-out one for me so far has been Robin Orr (1909-2006). His name came up whilst I was in Shetland because one evening I spent some time in conversation with one of his former students. He'd studied with him whilst attending Glasgow University where Orr taught between 1956 and 1965. There's a Cambridge connection, too, because Orr was an organist and lecturer here immediately before and after the Second World War and then, after leaving his post Glasgow, he returned to Cambridge as professor of music (1965-1976). This circle of accidental connections I find very pleasing.

There's not a great deal of his music available on disc but the good folk at Guild have brought out a couple of CDs of his orchestral and chamber music. They're well worth hearing but, to give you an immediate a taste of his style below, is a link to a 1966 recording of his First Symphony (1963). Enjoy!