Herbert Fingarette (1921-2018)—"Being 97": An ageing philosopher returns to the essential question: ‘What is the point of it all?’ 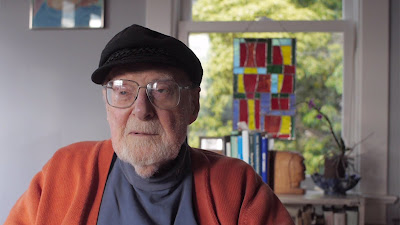 Just today I learn that the American philosopher Herbert Fingarette died last November. Fingarette taught a friend of mine and it was through him that I discovered something of Fingarette's work, particularly that on Confucius. But I was also very taken with many of the insights found in his  “The Self in Transformation” (Basic Books, New York 1963), especially the words which for a long while now have appeared in the header of this blog:

The Aeon webpage has just posted a very poignant and moving short film of Fingarette musing on the meaning of life and death just before his own death aged 97. It certainly brought tears to the eyes of both me and my wife Susanna and has sent us back to listen in a new way to Schubert's Rosamunde quartet.

Here's a link to that film and below that, the text which accompanies it.


Being 97
An ageing philosopher returns to the essential question: ‘What is the point of it all?’

‘Being 97 has been an interesting experience.’

By the time of his death, the US philosopher Herbert Fingarette (1921-2018) had lived what most would consider a full and meaningful life. His marriage to his wife, Leslie, was long and happy. His career as professor of philosophy at the University of California, Santa Barbara was both accomplished and controversial – his book Heavy Drinking (1988), which challenged the popular understanding of alcoholism as a progressive disease, was met with criticism in the medical and academic communities. In a later book, Death: Philosophical Soundings (1999), Fingarette contemplated mortality, bringing him to a conclusion that echoed the Epicureans: in non-existence, there is nothing to fear. But as Being 97 makes evident, grappling with death can be quite different when the thoughts are personal rather than theoretical. Filmed during some of the final months of Fingarette’s life, the elegiac short documentary profiles the late philosopher as he reflects on life, loss, the many challenges of old age, and those lingering questions that might just be unanswerable.
Director: Andrew Hasse
Producer: Megan Brooks
Email Post
Labels: Confucius death dying Epicurus Herbert Fingarette Philosophy Schubert
Andrew James Brown
My name is Andrew James Brown. I’m a philosophically/theologically inclined writer with sympathies towards Christian atheism, D. G. Leahy’s “thinking now occurring for the first time”, a Lucretian inspired religious naturalism, new materialism and Kyoto School philosophy; also a photographer, cyclist, walker and jazz bass player. In addition to this, I’m the minister of a small, liberal-religious, free-thinking community in Cambridge (UK)