“You have a donkey, so have I”—the only real possible path to peace—communication 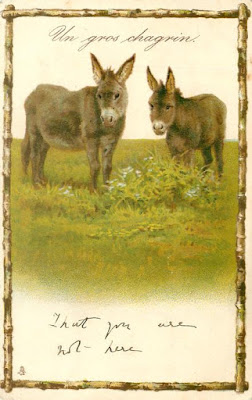 [Jesus] said to them, ‘Is a lamp brought in to be put under the bushel basket, or under the bed, and not on the lampstand? For there is nothing hidden, except to be disclosed; nor is anything secret, except to come to light.’

You have a donkey, so have I, and they graze in the same field. The day comes when I conceive a dislike for mine. I go to shoot it, draw a bead on it [i.e. aimed], fire: the brute falls in its tracks. I inspect the victim, and find to my horror that it is your donkey. I appear on your doorstep with the remains and say - what? “I say, old sport, I’m awfully sorry, &c., I’ve shot your donkey by accident“? Or “by mistake“? Then again, I go to shoot my donkey as before, draw a bead on it, fire – but as I do so, the beasts move, and to my horror yours falls. Again the scene on the doorstep – what do I say? “By mistake”? Or “by accident”?

And also, included in the address below, are three quotations from Antony Lyon’s helpful and perspicacious 2015 blog post also entitled “You have a donkey, so have I”

ADDRESS
“You have a donkey, so have I”—the only real possible path to peace—communication

In belief obsessed religion - and Christianity is all too often dangerously obsessed with belief - more often than not it is unchanging eternal “truths” that are believed will be disclosed or come to light; for example certain unchanging moral and/or metaphysical truths (what we may, perhaps, call “Last Words”).

But what if Jesus (who for us in this community is most assuredly fully a human being and not a deliverer of “Last Words”) is referring, not to the disclosure of putative unchanging moral and/or metaphysical truths but, instead, was concerned to suggest that it is always possible to shine some light on our actions so we can better see how and why our responsibilities have fallen to us in this or that way at this or that moment in time; and also whether, in situations where we or someone else is accused of having done something “bad, wrong, inept, unwelcome, or in some other of the numerous possible ways untoward”, any attempted defence of, or excuse for, this action is justified or not (Austin, p. 176). 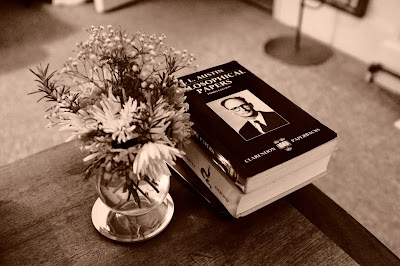 Let’s start with mistakes. To make a mistake is to make some kind of error. If I genuinely made an error in mistaking your donkey for mine then this means everything which followed on from my shooting of your donkey should not put down to my malice but, instead, to my making of a (genuine) error. True, I remain in some real way responsible for the death of your donkey but I shouldn’t be morally blamed for this because I truly had no intention of shooting your donkey, only my own.

But, if this were an accident, then the underlying situation would be very different even though the immediate, surface results turned out to be the same. We need to recall here that accidents are bound up with what we colloquially call “fortune”, i.e. situations in which certain things have come into play that were beyond our direct control. I may have carefully ascertained the initial situation accurately and identified beyond all reasonable doubt that I was aiming at your donkey and not mine, but then something unexpected and unpredictable occurred which produced a different and (to me) unforeseen consequence. I take aim but, just as I pull the trigger, your donkey in a fit of spring-time joy suddenly breaks into a gallop, runs in front of my donkey and so takes the bullet instead. I hope you can see that in this case I made no mistakes but, because I live in a world where a certain amount of uncertainty is always in play, an unexpected effect was able to play its part in the death of your donkey and not mine.

Your donkey is dead, in both cases killed by me, but in the moral or ethical sphere my intentionality matters a great deal; it must surely matter whether I meant to kill your donkey or not? It also surely matters whether the unintentional consequences of my actions happened by mistake or by accident. In all cases I hope it is obvious that the lessons I (we) can learn from these mistakes and accidents should be different.

Here’s are some of the different lessons the philosopher Antony Lyon thinks we can learn:

When I’ve made a mistake, then I know I saw things incorrectly. Assuming responsibility for a mistake requires me to understand not only what I missed, but also why I did. Two considerations should be part of your judgment of me. First, do I take responsibility for the consequences of my mistake? That matters because no matter my intentions, my actions have loosed suffering in this world. Anyone who hopes that confessing to a mistake absolves them of responsibility thinks like a child. The second consideration in judging me is to look at what steps I take to avoid the same type of mistake in the future. This is critical to relationships, as every action is based on how we interpret the situation; it’s only right that we work at interpreting them better.

To judge me in the case of an accident is a little different. Again, I should take responsibility for the consequences of the accident. But when an accident has befallen me, I should be able to acknowledge the risk in my behaviour. I must own the consequences because of my carelessness. Indeed, I might have taken many precautions before acting, but now that things are done, I must acknowledge that I acted without altogether eliminating risk - because you can’t if you’re ever to act at all! It was unfortunate that the risk, however miniscule, turned out to determine this situation. I should be judged by whether I own the risk I’d found to be acceptable and whether I adopt practices that are more sensitive to risk and more conscientious about the harm it might bring.

All very interesting you may say, but why do I bring Austin’s little tale and some of Lyon’s perspicacious thoughts on it before you this week?

Well, it is because next week we are all about to enter into a period of time in our national life when all sorts of people on all sides are going to be accused of having done something “bad, wrong, inept, unwelcome, or in some other of the numerous possible ways untoward” and, in consequence, we are going to hear a great many defences of, or excuses or justifications for, this or that action or lack of action.

The already opaque and confusing situation we are stumbling blindly through at the moment is highly likely going to become even more opaque and confusing in the next few weeks. However, as Jesus and Austin suggest in their own very different fashions, there remains available to us ways by which we can shine a little light on things, not least of all, by calmly trying to tease out what have truly been mistakes and what have truly been accidents and then genuinely going on to try to learn appropriate lessons from them.

The reason why we need to do this at all times - but especially at the moment - is because we all need to remember that it’s impossible to live in this world without making some errors and mistakes. This is a given. But what is not a given is whether or not we then choose to go on to try to draw useful lessons from our errors and mistakes or whether we simply start engaging in attempts to justify ourselves in order to avoid our genuine responsibilities for the current situation. Lyon offers us a further important reason for doing this kind of thing:

All too often, we’re careless in our speech. It’s easy to conflate mistakes and accidents especially in those anxious and fearful moments when responsibility is falling upon you, and you need to say something to avoid the responsibility or at the very least to mitigate the blame associated with that responsibility. When our emotional walls rise in a panic, we tend to opt for the kitchen sink approach. Our torrent of words subordinate meaning to immediate psychic relief, and we lose control of language and surrender the only real possible path to peace—communication.

Lyon is surely right and When- and where-ever real communication with ourselves and with others about our errors and mistakes ceases, there can be no peace. As I have just said, we all make errors and mistakes and (figuratively speaking) we are all at one time or another going to shoot the wrong donkey - this is a given - but this does not mean that following our errors and mistakes we should then be careless in our speech about them either to ourselves or to others. Neither does it mean we should attempt to avoid the responsibility that belongs to us, nor falsely to mitigate the blame associated with that responsibility. Some light can always be shone on the matter in hand.

In the strange, febrile populist mood of our times in which emotional walls are without doubt rising in a panic we must surely be trying our level best to ensure that the torrent of words (our own and others) about our situation is not allowed to subordinate meaning to immediate psychic relief.

Today I have left aside the rather more intractable and important psychological questions we may ask about failures which come under such headings as thoughtlessness, inconsiderateness and lack of imagination etc. and which are “more matters of failure to appreciate the situation” (Austin, p. 194) than anything else (including questions like whether we should be shooting donkeys in the first place!). However, it still seems wise for me to encourage us to take every opportunity available to remind ourselves and others that careful and reflective use of language is a powerful and useful light that should be kept high-up on our public lampstands and not hidden away under a proliferating number of private bushel baskets or beds.