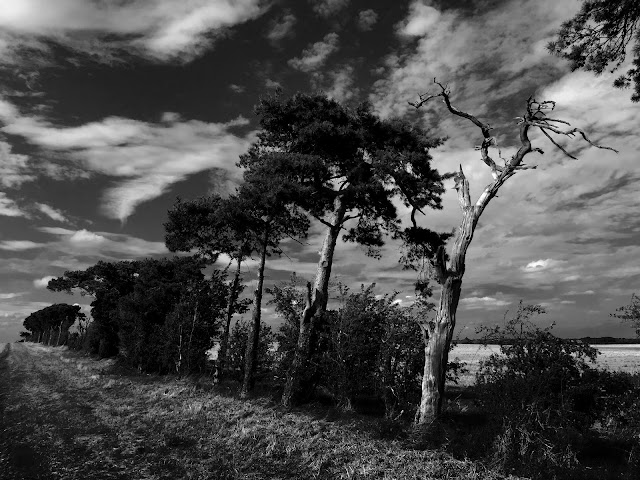 Taken with an iPhone 6 Plus and the Blackie App
Just click on the photo to enlarge it
In 2016, when this photo was taken, I was just beginning to think seriously about getting what, once-upon-a-time, I would have called a “proper” camera. I’ll come back to the problematic word “proper” in a moment.

When I was a teenager in the late 1970s my father gave me a Voigtlander 35mm camera and I had great fun learning how to take, mostly black and white, photos on that. There was a skill to capturing even a half-decent image and I remember enjoying immensely the challenge of this. I delighted in it so much that after my A-levels I toyed for a while with the idea of going to college (at Colchester Institute) to study photography before eventually ending up going there to study music a couple of years later. I may not have gone to college to study photography but I carried on using that Voigtlander right on into the 1990s, before eventually buying a point-and-shoot digital compact for the odd occasion when I wanted to take a photo.

Then, sometime in 2015, through my job, I was given an iPhone 6 Plus. Of course, it had a camera in it which I quickly discovered, along with a few apps that were able to replicate the kind of black and white images I aspired to take way back when. One of my favourite apps was and remains the “Blackie App” which is still available today and I thoroughly recommend checking it out (along with the Lenka app).

Because I had that phone with me almost all the time, I found myself starting to use the camera more and more often, especially whilst I was out cycling and this particular photo was taken on a sultry, mid-September ride at the Great Chishill end of the road which runs parallel to Duxford Airfield. I’ve always loved the Breckland landscape since my childhood because to visit my grandparents we had to make our way through Thetford, and these very Breckland-like Scots Pines on a field edge, although not actually in Breckland, naturally caught my eye and imagination. There was a wonderful, hauntological, M. R. Jamesian feel about the scene — and, indeed, Great Chishill is mentioned at the start of his 1913 ghost story called “The Story of a Disappearance and an Appearance.” As I hope you can imagine all this meant that I could not resist getting off the bicycle and wandering into the field to take this photo which remains a favourite of mine.

I think it was this shot that made me first properly question the idea of there being such a thing as a “proper” camera. This was clearly a proper camera that took proper photos and so I began to read extensively about “iphoneography.” It turned out that many professional photographers were also using them both to take shots that they eventually published/exhibited and as a kind of field “sketchbook”. Along the way, I also discovered the bon mot that, “the best camera in the world is the one you have with you.” And the camera one most often had with one was the iPhone. In that sense, it often was the best camera in the world!

In the end, I did buy a “proper” camera (a Ricoh GR2 and then a Fujifilm X100F) but, by the time I did that, it was only to supplement the other “proper” camera on my iPhone that I always had tucked into my jacket pocket.