Whilst I was training for the Unitarian ministry and studying theology at Harris Manchester College, Oxford between 1997 and 2000 I had the pleasure and privilege of getting to know the historian Alan Bullock who was, himself, a Unitarian. Lord Bullock wrote a book which I first read when I was about sixteen or seventeen called Hitler: A Study in Tyranny. It had an incredibly powerful influence upon me and was one of the major reasons I early on identified with avowedly anti-fascist politics. Reading it also helped me better to challenge an uncle of mine who had been a supporter of Moseley's Black Shirts and who even left me his copy of Hitler's evil book Mein Kampf as, I'm sure, a final attempt to persuade me that I, as a young leftist and liberal, was deluded and he, Moseley and Hitler were right. Of course, he failed to persuade me.

Anyway, one Sunday after service in the college chapel and over a cup of coffee I asked Lord Bullock the question, "What, after all your years of academic study of Hitler and Nazism, is it the single thing you'd like to pass on to someone like me?" He replied immediately by saying something along the lines of "Whenever you hear someone spreading fascism, even if it is in the queue in the Post Office, challenge it." In other words, draw a line, don't let it spread, never let it become quietly normalized.

Well, as my address on Sunday revealed, the sad situation is that key building blocks of full-blown fascism and neo-Nazism have been being quietly normalized during the last few decades and we now find ourselves well over "the line". But the trouble is that when many of us try to call this out and give what is going on its proper names, i.e. FASCISM and NEO-NAZISM, we are often told we are going "over the top" and that we must "calm down" and "be reasonable and polite" as if we were living in normal times where calmness, reasonableness and politeness (and decency and liberal democracy) were truly still holding sway. But they are not holding sway and we are clearly no longer in normal times. So what to do? Well, I go back to Lord Bullock's lesson to me that we must somehow find ways to draw a line. But that remains a hard thing to do in our culture where the policemen and women of the our pseudo "Normal" politics continue to try to shut up those of us who feel urged to call a spade a spade and call out fascism and neo-Nazism when and wherever we see it.

The matter is very pressing here in the UK but it's exceptionally and frighteningly pressing now in the US where "Normal" has gone the way of the buffalo. There one brave line was drawn last week by the owner and staff of the Red Hen Restaurant in Lexington, Virginia who asked Trump's press secretary, Sarah Huckabee Sanders to leave because she was working for his administration and, in part, for supporting the policy of separating children from their refugee and asylum seeking parents. Not surprisingly the police of "Normal", in this case the mainstream media (MSM) in the form of the "Washington Post" (WaPo) published a piece entitled "Let the Trump team eat in peace" in which they complain about things becoming uncivil. Uncivil! Good God! was my feeling when I read the piece. Well, I'm pleased to report (and reproduce below in case it gets suppressed on Twitter for whatever reason and by whomsoever) an excellent and powerful thread on Twitter by David Roberts who writes for Vox.com on energy and climate change matters. I recommend everyone dropping by this blog reads it but, perhaps particularly, I'd encourage my readers in the UK because. although we are not as far gone down the fascist and neo-Nazi road as the US is heading under Trump, MAKE NO MISTAKE, we are descending the same slippery slope here. I have to say that every incremental slip down it I cannot but think back to what Lord Bullock said to me that quiet, civilized Sunday morning twenty years ago. He'd surely be turning in his grave . . .

1. Unsurprisingly, this bit of kneejerk onanism from the WaPo editorial board completely misses the significance of this whole episode. In fact, it gets it wrong in exactly the same way Very Serious People have been getting in wrong in DC for decades.

2. The salient fact about US politics is that the right has been going steadily more crazy for decades -- breaking the law, disregarding norms, sinking into a hermetically sealed media bubble filled with paranoid conspiracy theories, seeking to disenfranchise opponents, etc.

3. At every stage, it gets worse. Norms & values we thought inviolate are crapped on, lawlessness becomes more brazen, ugly prejudices we thought buried, or at least suppressed, roar back to the surface. And with every increment, the question re-presents itself:

4. What should the rest of us do? The ~25% of Americans who believe & want horrible, illiberal shit ("deplorables," you might call them) have taken over the GOP. They are driving it toward fascism as fast as the system will allow them. What's the right response?

5. For years, lefties have been warning about this devolution of the GOP, going back to Reagan. They have bene dismissed as crazy partisan hippies, condemned as "uncivil," told they are part of the problem, because being mad about illiberalism is just like illiberalism.

6. The question has always been, where do you draw the line? At what point in the GOP's devolution do we say: OK, that's too far. We're no longer in Normal Politics. We're in a crisis situation, on the verge of losing our democracy. Where is the line?

7. The most insidious thing about the descent into illiberalism is that it is incremental. There's no dramatic moment, no Rubicon. Every step seems bad, but only a little worse than the previous step. Smart autocrats are careful not to provide that moment.

10. Now here we are with a president who very openly pines for tyranny, explicitly disregards laws & norms, is nakedly racist, lies as often as he breathes, and oh yeah, is now JAILING TODDLERS TO DETER LEGAL IMMIGRATION.

11. By jailing toddlers, Trump has potentially made a mistake. Instead of incremental illiberalism, this seems like a jump, something to shock the conscience. It is yet another opportunity for a Moment, a time for the rest of us to say: no. This is not normal. It's not ok.

12. That what's the owner of the Red Hen was doing by refusing to serve Sanders: saying, No. This is not just a normal political dispute that can remain confined to the political sphere. You cannot support this & still expect to be treated like a normal, decent person.

13. The owner was trying to draw a line, disrupt the normal daily patterns of civility & accommodation, create a Moment around which people can rally to echo the message: No. This is not normal, not "just politics." We must stop pretending it is; we must snap out of hypnosis.

14. And so, right on cue, the Very Serious People ride to the rescue of the aspiring tyrants, saying, yet again: Calm Down. Let's not get crazy here. Let's not be RUDE. Heavens no. We must retain our decorum at all costs.

15. WaPo editors say that accepting incivility (gasp) is a "slippery slope." But that gets it exactly wrong. WE ARE ALREADY ON THE SLIPPERY SLOPE. It's a slope that leads to illiberalism, violence, & collapse. It's a slope greased [with] accommodation & civility.

16. What the Red Hen owner (& others) are trying to do is jerk us awake, push of OFF the slippery slope. They're trying desperately to draw a line, to cease the slide. And every time they try -- even now, even to this day, even with toddlers in cages -- the MSM scolds them.

17. The Very Serious People who serve as tone police in DC need to decide what they value more: democracy or civility. Because we're just sliding, sliding, sliding down this slope, pretending all the while that things are still Normal. To get off the slide ...

18. ... will, almost by definition, require a break with Normal. It will require some sand in the gears, some raised voices, some violations of decorum and precedent. I dunno if restaurant service is the right mechanism, or even a good one. No one knows.

19. The WaPo editorial board, like the MSM establishment more generally, has been utterly fucking useless in slowing our slide to illiberalism. They've done nothing but obscure what's happening behind a veneer of Normal. They have failed. But for the luvagod ...

20. ... the very least they can do is refrain from concern trolling citizens who are (RIGHTLY) in a panic about the loss of their country. Maybe the agents of this cruelty, the ones lying on its behalf, should feel a little discomfort. There are worse things in the world. </fin>


And here, just for the record, are the screen shots of the same thread. 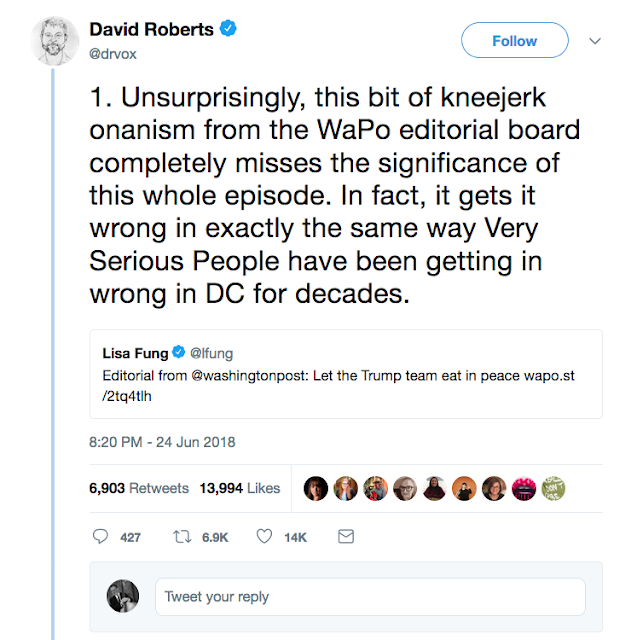 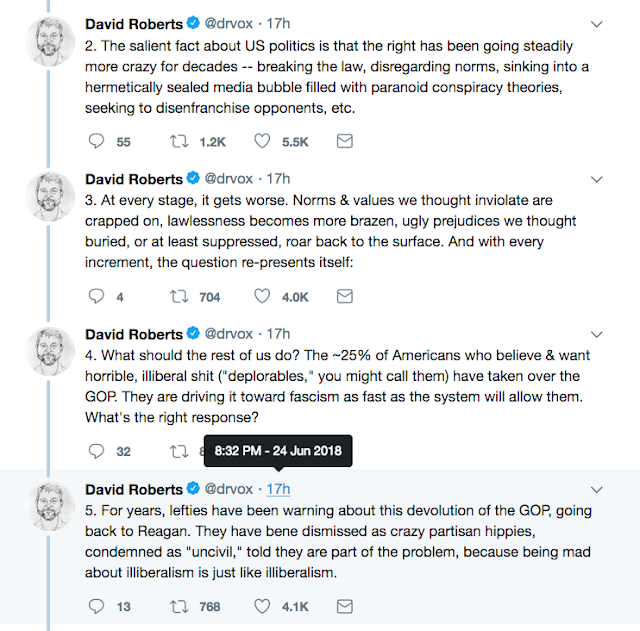 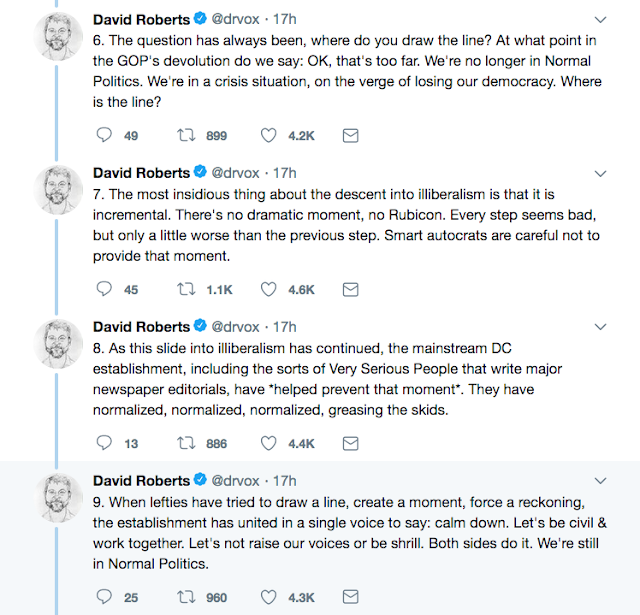 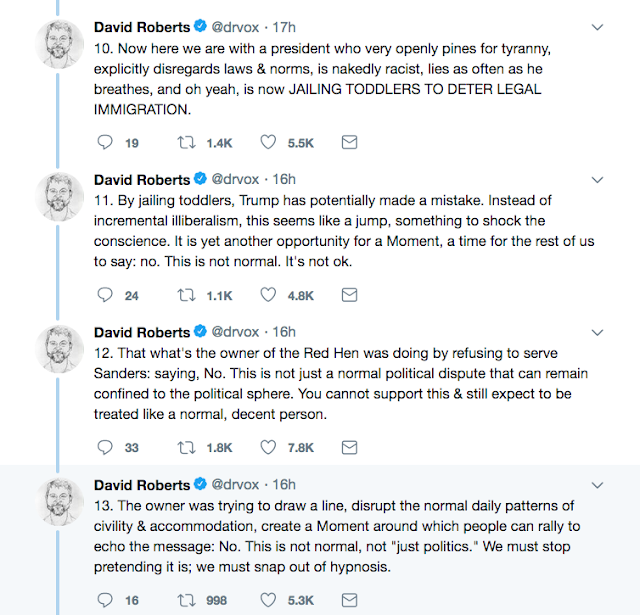 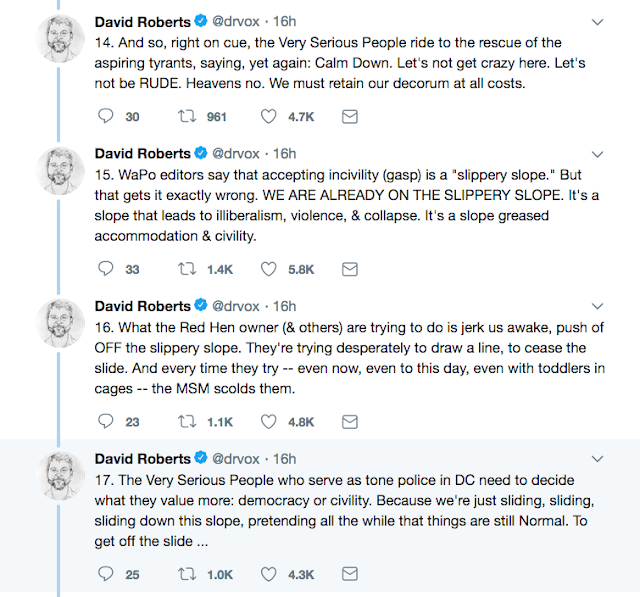 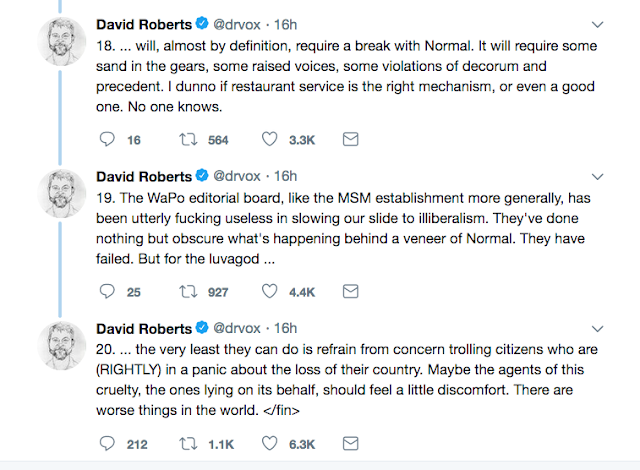