Losing our fear of death: the third of five, very short, morning reflections on the philosophy of Epicurus for BBC Radio Cambridgeshire

Talk 3—Losing our fear of death 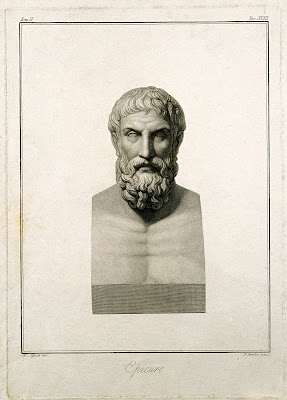 (Hear the talk for a limited period of time at this link. The piece starts 28 minutes 10 seconds into the programme and finishes three minutes later.)

This week we’ll look at the fear of death itself, coming, as it does for Epicurus and his followers, without a belief in an afterlife.

Epicurus addressed this fear firstly by noting that everything which is for us desirable or undesirable, good or bad, produces in us pleasure or pain, either directly or indirectly. He then observes that our own death cannot result in us feeling pain because when we die we are no longer there to feel it. True enough our family and friends may mourn and feel pain at our death but we will not be able to. As Epicurus realised, what point is there then, in being anxious or fearful about something if we know that when it happens it cannot possibly cause us any pain, either directly or indirectly?

This is why Epicureans were widely known to say “death is nothing to us” and sometimes they wore signet rings or looked into hand mirrors with these words engraved upon them as a daily reminder that they had no need to fear death.

But, if death is nothing to a follower of Epicurus, this life, properly lived, does mean a great deal, and it is something to be fully and tranquilly enjoyed with our family and friends before fearlessly “to the wind’s twelve quarters / I take my endless way” (A Shropshire Lad XXXII) as the great English poet and Epicurean, A. E. Housman, once beautifully put it in his A Shropshire Lad.