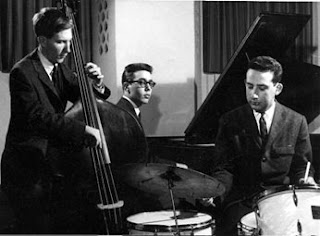 As you will be aware I am not only a minister of religion but also a professional bass player and, in my University teaching, I am constantly aware that there is often a considerable overlap between what I am trying to teach in the faculty of music and what I am trying to do from the pulpit.

One of my constant mantras in the latter is the desperate need for religious liberals to get spiritually disciplined - carefully to follow a coherent path and tradition and not to be frightened by becoming an apprentice in the school of a religious master such as Jesus. Really to try and imitate them - not so that you remain for ever a mere pale copy of them - but so that you can, in the first instance, get a real grip on how to be a genuinely free religious person in the world. But, alas, all too often this approach is written off as being too prescriptive, too restrictive of a person's freedom to improvise their own spirituality.

In an attempt to give folk a feel of what I might mean from a non-religious perspective here is a link to an interesting essay entitled An Unpopular Perspective in Jazz Education by Chuck Israels (see picture above) - who played bass with, amongst others, the pianist Bill Evans - in which he explores a similar question in musical terms.

I and my colleagues constantly come across students who claim that they want to play jazz and improvise but who, it turns out, have never listened to any players or records. They know nothing about the actual music and have only the vaguest idea of what it is about - generally hung on a false idea of in what consists freedom to improvise. But, as Israels notes without a model or a prototype "there is no image and no passion." Israels continues:

This acquisition of personal prototypes is an essential first step in the learning process. Without it, there is no foundation on which to build technique. A student can only be helped to learn to emulate an art for which the student has a clearly held image. Attempts to assimilate a more abstract process of technical practice without a sufficiently ingrained model are likely to prove frustrating, if not futile. Imitation is primary. The more highly developed the model and the more exact the imitation, the more successful will be the results.

And what are the more successful results? You've guessed it, true freedom within the limitations that are imposed on every human being whether you are seeking to be a good bass-player or a genuinely free religious person.

So, dear Chuck (if you ever read this, which is highly unlikely), thanks for the great and inspiring playing over the years. You were one of my models and it payed off well . . .

Gregory Dudzienski said…
Revd Andrew,
Great post and great analogy. I am a jazz saxophonist and a bit of a spiritual seeker myself. I've posted a link to Chuck's article on my blog. Thanks for bringing it to my attention!