How small a thought it takes to fill a whole life! - On Magi and modern astronomers 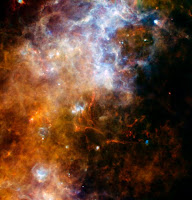 (Note - in my mind as I wrote this address was the new European Space Agency's Herschel Telescope which has been revealing some amazing new things . . .) The "swirling patterns of gas in the image at the top of this blog came as a complete surprise to astronomers. They are located thousands of light years away from Earth in the constellation Crux, the Southern Cross. Crux is such a prominent constellation in the southern sky that it features on the flags of seven countries, including Australia and New Zealand."

Readings: Matthew 2: 1-12 and from Culture and Value by Ludwig Wittgenstein:


How small a thought it takes to fill a whole life!


Just as someone may travel around the same little country throughout his whole life, and think there is nothing outside it!
You see everything in a queer perspective (or projection): the country that you ceaselessly keep covering strikes you as enormously big: the surrounding countries seem to you like narrow border regions.

In 1946 Wittgenstein made two short entries in a notebook. The second of these we'll explore on Sunday but today I'll very briefly look at the first. He began by noting 'How small a thought it takes to fill a whole life!' and we'll take one example relevant to today's celebration, the Magi - the astrologer priests of the Christmas story.

One day a new star appeared in the sky and the divinely ordered and, therefore, predictable movements of the stars and planets - a certain interpretation of which lay at the centre of an astrologer's life - were suddenly disrupted. I imagine that most of use here today would respond to such an event with a small thought in the form of a question along the lines of 'WHAT is it that is there'? The Magi, believing in a divine, rather than natural ordering of the world, would almost certainly have asked 'WHY is it that it is there?' Although these are very different thoughts and questions today I wish simply to point briefly to two things. One, that despite the difference between these questions a surprising connection between them can be seen and, two, how both of these small thoughts expand to fill a whole life.

As Matthew tells it the astrologer's small thought expanded to become a motive to begin a journey out of their own familiar country and into 'narrow border regions' - strange and unknown lands - and thence onto the encounter with the Christ-child and to the beginnings of, what for them, became a new conception of in what consisted reality. For them a certain new kind of light had come into the world.

Now you might think that a modern astronomer's small thought would take them on a wholly different journey but is that entirely true? What does seem to be true, of course, is that the appearance of a new star (any new celestial phenomenon in fact) would not be read as literally a sign from God directing them to a certain place and time in the physical landscape. But even though this is the case I think it is possible to see that the Magis' and a modern astronomer's journey share a certain shape, figure and form which is summed up in the German loan word 'Gestalt'.

Here's what I mean. The appearance (or discovery) of a new astronomical phenomenon in the sky makes the astronomer have a small thought 'WHAT is it that is there'? This has, many times, expanded to become a motive to begin a journey out of their current patterns of thinking, that is to say out of their present paradigm (which we may take to be a kind of familiar "country") and thence into vague 'narrow border regions' which, in relationship to their previous understanding of the world, can look appear as a very strange and unknown land. Assuming that this "journey" forces them to develop ("arrive") at some new theory about the new phenomenon (the new theory being a kind of naturalistic "Christ-child") then they, too, can be said to have developed a new conception of in what consists reality. This new knowledge is for them, as it was for the Magi,  also a certain new kind of light which has "come" into the world.

Both the Magis' small thought and that of the modern astronomer have filled many lives - entire cultures in fact. Maybe I'm wrong but it does seems to me that there is a shared Gestalt here - a shared shape, figure and form - and that may be worth a small thought today.

What is particularly striking to me is that both the astrologer and the astronomer respond to something NOT of their own making and that they seek, to the best of their abilities given the limits of their own time and culture, to let the star speak its *own* truth to us. It was and is not sufficient for either the Magi or the astronomer merely to conjour up an easy answer that suited their present way of thinking or prejudices but to be prepared to let their small thought take them way, way beyond the comfortable confines of their present country and knowledge to a new and fuller conception of in what reality consists. They were both attempting to measure themselves against something far greater and secure than their own opinions - that is to say, to measure themselves against God or Nature.

Herod - you remember the bad guy of the Christmas story - is symbolic of someone who most certainly doesn't want to be measured by anything other than their own power and opinion because their power is vested in the unchallenged status quo. Why would he want to upset the apple cart? Little has changed and just as Herod later tried to kill the Christ-child there are some today who would like to kill new scientific insights - esepcially those that challenge many religious staus quos. Plus ca change, plus ca la meme chose.

Anyway, this morning, it seems to me that the shape, figure and form of the Christmas journey of the Magi, even though it has for many in our culture become a potent symbol of something reactionary - an unchanging point in a changing world - when considered as I have done it is a story which points in precisely the opposite direction. It is an encouragement always to be open to new and more nuanced, enlarged conceptions of both ourselves and the natural world and, therefore, it is a story encouraging a radically open-ended and open-hearted way of being in the world.

The encounter with the Christ-child or the new scientific paradigm is not where the human journey stops - they are both simply the beginning of a new kind of looking - a new attitude to reality. To return to Wittgenstein's note, after greeting the Christ-child or the new scientific paradigm we are in a new country and, although it is tempting for a time to think that there will be 'nothing outside it' it, too, will eventually 'reveal' to us its limitations and 'narrow border regions'. One day another unknown  star will rise above its skies, a small thought will enter someone's mind, and another journey of discovery and measurement will begin.

To be faithful to the Christmas story and science is simply to keep looking for the new star and to be prepared to follow it *wherever* it leads, despite the profound challenges it will always bring to old ways of being and thinking. And that which vouchsafes the constant appearance of such stars and against which we measure oursleves (which some people call God, others Nature, and still others with a Spinozistic frame of mind call Deus-sive-Nature) it is that which brings us here today in celebration to give thanks for the astonishing gift of Life itself symbolised for us in the joyous birth of Christ, born THIS happy morn.

Robin Edgar said…
"To be faithful to the Christmas story and science is simply to keep looking for the new star and to be prepared to follow it *wherever* it leads, despite the profound challenges it will always bring to old ways of being and thinking."

And what if *wherever* that new star, or indeed rediscovered and/or resurrected "less than new star", leads you to causes profound challenges to current ways of thinking that have "less than pleasant" implications Andrew? You might want to read Arthur C. Clarke's science fiction short story 'The Star' written way back in 1955 to get *some* idea of what I am talking about here. Trust "famous Unitarian" aka "famous U*U" :-) Rod Serling to try to put a positive spin on the Twilight Zone's televised version of 'The Star'. . .

Who is to say that the "new star" in the east, that allegedly heralded the birth of Jesus Christ, wasn't a supernove that wiped out an alien civilization? But there are other "news stars" closer to home that have rather disturbing implications. One of them turned 64 this year. . .
25 December 2009 at 20:38