Conducting each other into new worlds of thought - or Moss, our sweet cousin. A wedding homily for Jo and Aidan Craigwood 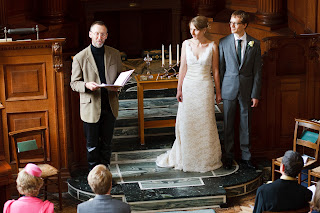 This Sunday's address was the brief homily I offered at Jo and Aidan's beautiful and moving wedding at the church on Saturday 19th June - a service that they carefully created over a year and a half. (The wedding photos in this post were taken by Tom Catchesides.)

I thought that allowing this piece a wider audience would be worth doing because it relates to what for me is one of the primary fruits of our religious community - namely to provide people with the opportunity for honest and open conversation about matters of faith and belief and to encourage us all slowly to turn this into embodied and impassioned ways of being in the world (i.e. not just to create abstract theories about the world). This seems to me to be a vital discipline for us because we live in an age in which, for those who might be attracted to such a religious community, the old religious certainties have gone and, in consequence, we are in need of finding ways to learn to build, think and dwell in what is really a new land - that open, creative sacred space where the gods of ancient times used to dwell and about which I have recently been speaking.

Jo and Aidan are one couple who have, together, clearly conducted themselves into greater, new worlds of thought, and through a process of building, dwelling and thinking begun to embody what they have discovered in their loving act of marriage. In my now year-and-a-half long conversation with them I have learned at least as much from them as anything they may have learned from me. In other words I, too, have been conducted into new worlds of thought and for that I am truly grateful and offer them my very best wishes for their future life.

But before the address itself here are two of the readings from the wedding service which were, of course, chosen by Jo and Aidan:

I keep the rustic gate closed
For fear somebody might step
On the green moss. The sun grows
Warmer. You can tell it’s Spring.
Once in a while, when the breeze
Shifts, I can hear the sounds of the
Village. My wife is reading
The classics. Now and then she
Asks me for the meaning of a word.
I call for wine and my son
Fills my cup till it runs over.
I have only a little
Garden, but it is planted
With yellow and purple plums.

There can be no fairer ambition than to excel in talk. [. . .] It costs nothing in money; it is all profit; it completes our education, founds and fosters our friendships, and can be enjoyed at any age and in almost any state of health...

But the true talk, that strikes out all the slumbering best of us, comes only with the peculiar brethren of our spirits, is founded as deep as love in the constitution of our being, and is a thing to relish with all our energy, while yet we have it, and to be grateful for forever...

In the garden, on the road or the hillside, or tête-à-tête and apart from interruptions, occasions arise when we may learn much...; and nowhere more often than in married life. Marriage is one long conversation, chequered by disputes. The disputes are valueless; they but ingrain the difference...But in the intervals, almost unconsciously and with no desire to shine, the whole material of life is turned over and over, ideas are struck out and shared, the two persons more and more adapt their notions one to suit the other, and in process of time, without sound of trumpet, they conduct each other into new worlds of thought.

Every Sunday on every order of service in this church there are printed some words of the American transcendentalist author Bronson Alcott (father of the more famous Louisa May Alcott); they read as follows:

"Conversation as the natural organ communicating, mind with mind, . . . is the method of human culture. By it I come nearer to those whom I shall address than by any other means."

Honest conversation - in which all sides are genuinely open to enlarged conceptions of understanding - honest conversation has always seemed to me to be essential to the creation of the genuinely good, true and beautiful life. Given this I was delighted when Jo and Aidan asked me whether I would speak in some way about conversation, a subject which their readings eloquently revealed to us is a matter of great importance to them. In the year and a half I have known them I have also become aware that this passion for conversation is intimately tied to yet another, namely a deep love of the natural world - a love which was also expressed in their choice of readings. As they told us in their introductory words they felt, along with Robert Louis Stevenson, that these readings point to an end in which "shared experiences add up to something, somehow, much greater – new worlds of thought." 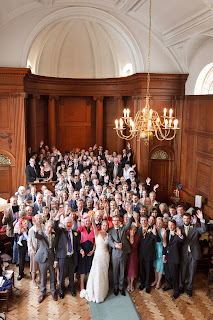 It has long seemed to me that over the centuries our Western European and North American culture has for many reasons, none of which I will rehearse here, become overly concerned with theories *about* the world. This attitude, though it has revealed many wonderful things about the world in which we live, has had the unfortunate side-effect of encouraging us increasingly to observe life almost as outsiders and, in the process, we have often forgotten how to be fully *in* the world, able to experience it directly and with a deep sense of wonder.

Of course, whether we are aware of it or not, we are always-already-in-the-world but it seems to me that key to the leading of a truly fulfilled and good life is to have some regular disciplined practise which can keep us fully aware of our intimate comminglement with the whole world.

Someone who clearly engages with the natural world in this fashion is the contemporary American poet Mary Oliver. She has an uncanny knack of conversing with the world as it presents itself to her and then, in response, to formulate, not dry, abstract theories about the world, but instead offers us words which can help draw us back into the world with great gentleness, compassion and love. Her poems, to me at least, always reveal "somehow, much greater – new worlds of thought".

I could have chosen any number of poems which illustrates this conversational process but I have chosen just one, entitled "Moss" and I chose it simply because Jo and Aidan offered us Lu Yu's poem in which we discovered that in the company of moss he and his wife experienced something of the deep fulfillment that comes about when we are prepared to converse deeply with each other and the world. As the Roman poet Lucretius observed:

Nature's gifts are simple. [. . .] She has no need to improve on the simple pleasures of friends stretched out on a grassy knoll beneath the arching branches of living trees near water purling in some brook. What riches can equal that? (De Rerum Natura, Bk II, line (in this edition) 220ff - trans. David R. Slavitt)

So now, in your imagination, lie down with your eyes close to the moss and look carefully at the plants and creatures Oliver describes and as you do this listen, too, to her conversation with this world; let the conversation draw you back into an immediate experience of life itself:

Maybe the idea of the world as flat isn't a tribal memory
or an archetypal memory, but something far older - a
fox memory, a worm memory, a moss memory.

Memory of leaping or crawling or shrugging rootlet by
rootlet forward, across the flatness of everything.

To perceive of the earth as round needed something else
- standing up! - that hadn't yet happened.

What a wild family! Fox and giraffe and wart hog, of
course. But these also: bodies like tiny strings, bodies like blades and blossoms! Cord grass, Christmas fern, soldier moss! And here comes grasshopper, all toes and knees and eyes, over the little mountains of dust.

When I see the black cricket in the woodpile, in autumn, I don't frighten her. And when I see the moss grazing upon the rock, I touch her tenderly,

This new world of thought born of conversation encourages me to say that Jo and Aidan's coming together in love points us to a sense, a truth even, that we all belong to each other - we are all brothers and sisters one with another and cousins with everything else in the world - even the humble moss on Lu Yu's lawn or Oliver's rock. How right Lucretius was, "Nature's gifts are, indeed, simple and what riches can equal this?!"

So when we next see moss grazing upon some rock or lawn, don't forget to touch her lovingly and tenderly, your sweet cousin, and let her be for you a reminder of this joyous day, when we were privileged to witnessed the tender touch of two people brought together in a loving conversation which will, for a lifetime, forever be conducting them into new worlds of thought.
Email Post
Labels: Bronson Alcott Conversations David Slavitt De Rerum Natura Heidegger Kenneth Rexroth Louisa May Alcott Lu Yu Lucretius Mary Oliver Moss Nature Robert Louis Stevenson Wedding
Andrew James Brown
My name is Andrew James Brown. I’m a philosophically/theologically inclined writer with sympathies towards Shin’ichirō Imaoka’s understanding of free religion (自由宗教), Christian atheism, D. G. Leahy’s “thinking now occurring for the first time”, a Lucretian inspired religious naturalism, new materialism and Kyoto School philosophy; also a photographer, cyclist, walker and jazz bass player. In addition to this, I’m the minister of a small, liberal, free religious community in Cambridge (UK)

Yewtree said…
Wonderful! I had a conversation on Sunday which was like that.

I would love to use an excerpt from this blog-post in The Unitarian, if I may (from the Bronson Alcott quote to "somehow, much greater – new worlds of thought" and then a bit from the paragraph after the poem).
28 June 2010 at 11:46