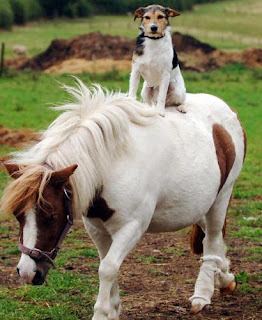 Ernst Bloch, the German Marxist philosopher tells a story about a horse and a dog who were friends in which "the dog saved the best bones for the horse, and the horse put the most fragrant bunches of hay before the dog; each wanted to do his best for the other, and neither one was fed" (Bloch, Ernst, "Traces", p. 10).

Most obviously this story shows us something about friendship. As Bloch observes, one simple lesson that what would help a great deal is having more modest expectations of what others, mostly kindly, offer us from time to time.

But Bloch's little story points to something else that can, I think, be helpful to us as a particular kind of religious community seeking an effective contemporary way to be liberal in the face of the loss of certain key old liberal religious certainties. We begin to catch a glimpse of a way forward by starting with Bloch's concluding words: "[W]hen one sees [the other's] bundle of hay - their evening, their Sunday - one cannot understand how they can bear to live."

I'm sure all of us can remember an occasion when we have experienced just this kind of visceral feeling. Perhaps after an evening spent at the home of a friend, a neighbour or some other acquaintance or, to bring it into the obviously religious context, after those occasions when we have been invited, often very kindly, into another Christian church setting or a religious community holding an entirely different faith to us.

But when this feeling arises it can be quite disconcerting and stressful as a liberal because considerable effort has been expended in developing a broadly secular tradition which holds that somehow other faiths and beliefs quite different from our own should be accorded an absolutely equal place along with our own in the so-called "market-place of ideas." However, despite this hard work, perhaps inevitably, this visceral feeling has never stopped popping up now and then and so there remains a pressing need amongst us to develop a theology to deal with it.

The old liberal theological solution can be outlined as follows. It divided religion into two elements, the transient and the permanent (cf. particularly Theodore Parker's influential sermon of 1841 on this subject). For convenience I offer it to you in this simplified and condensed way - its actual development is, of course, far more complex than this account.

On the one hand were bracketed together those things that we found to be either merely puzzling or even actively distasteful (such as creeds and certain ritual practices) and, to make our dislike less important, we interpreted these beliefs and practices as being somehow merely accidental or matters of personal taste - accidents of culture, time and place.

On the other side of the equation we bracketed together the things which we thought reason had revealed to us as permanent, timeless and universal and we took seriously in another religion only these things. These things formed, we believed, the universal heart or core of pure religion - a religion we believed we already had or were, at the very least, on the way to uncovering. (There have been, and still are, published many books which collect together various bits of various religions together and which are given titles like "The Essential this or that".

Consequently we could simultaneously be appalled by some aspects of another religion (and ask how on earth its adherents could possibly live like that) but, at the same time we could dispel our latent guilt for feeling this by 'magnanimously' believing that, despite this, we were capable of seeing through to the universal and permanent which lay at the heart of any other religion.

By this method it appeared to us (and still does to some liberals) that we did achieve a kind of unity but it is vital to realise that we only achieved this at a considerable cost - namely unity on our liberal terms. It was a kind of liberal universalist colonialism. It is a tempting thing to do but, once thought about, it is hard for us to think this doesn't seem quite right.

Here we may usefully return to Bloch's story.

Firstly I want us to note that it is not one merely about taste or something merely accidental. It is not that the dog merely prefers bones to hay, and the horse hay to bones; No! *constitutionally* speaking, the dog cannot eat hay and be fed and the horse, *constitutionally* speaking, cannot eat bones and be fed and it will be so until the end of time. Taste doesn't enter into the picture. What it is that constitutes dogly-being or horsely-being includes the need to eat bones not hay, hay not bones.

But our the liberal desire for higher order theoretical unity tends to make us jump from the particularities and see a higher unity - by saying, for instance, "Ahah! but they both need food." This jump might have some limited practical local use but as an expression of some real, existing higher unity it is an illusion caused by our language because 'food' doesn't exist; no actual dog or horse has ever eaten 'food' and been fed it has only ever eaten bones, no actual horse has eaten food and been fed, it has only eaten hay.

Secondly I hope you can see that unity on our terms is rather like trying to feed a horse with our bones. We thought we had a universal and timelessly nourishing food (with no sell-by or eat-by dates) but the horse, of course, has taken one look at our fare and, even though we may have offered it for the most part in friendship, the horse asks us how on earth we can bear to live like this? Our food is, for the horse of course, inedible.

In the light of these two points I want us firstly to see that this constitutional inability to eat what sustains another takes place between a dog and horse who were friends - neither of them need be ashamed of not being able to eat what they have offered each other. The trick is to become aware of this and seek to move our friendship forward on other grounds.

The second point is related to the preceding one. I'm increasingly feeling that the old bones of our liberal religious tradition are not incapable of being eaten by the horse but that they also aren't looking too tasty to us anymore. Why? Well our historical and, at the time, not unreasonable hope was that we would be able to achieve unity (or at least friendship) between religions (between dogs and horses) at the higher level of theory or theology. But that hope is simply unsustainable now for many of the reasons I have been exploring with you over the past few years. Consequently, if we wish to continue to move forward in our desire to contribute to a certain kind of unity, or at least real friendship, between religions then we must change our approach.

How might we do this. Well, we can begin by taking seriously Wittgenstein's advice to "Look, don't think!" by which he meant we should look, actually look at what is before us and not to be tempted, as our liberal tradition is wont to, immediately to jump to abstract universal theories about the world which don't take seriously the particularities of existence (e.g. jumping immediately to 'food' without understanding the need for bones and hay). More than incidentally I interpret Jesus' call to consider the lilies of the field and the birds of the air as a similar call to that made by Wittgenstein.

If we wish to rescue our liberal tradition we need to engage in a course of disciplined moral reflection that consist in paying infinite patient attention to the individual realities of our world. (This is a long term project that may take many generations before it bears mature fruit.) As one of the great twentieth-century British Unitarians, Robert Travers Herford, once observed to a group of Anglican clergymen, "Our duty is not to convert each other but to understand each other."

This discipline will, I hope, also help guard us from becoming bewitched again by the illusory belief that we can discover and apply universal, permanent first principles of action that will suit everyone for all time and which can become the basis of a universal religion.

It is important to realise that an obsessional belief that a theoretical higher unity is more valuable (and real) than actual realities is something which is, I believe, increasingly standing in our way to a proper engagement in the "direct and unimpeded action for the concrete good of our neighbours" and the realisation of a practical ethic of love our liberal tradition has long desired - an ethic whose exemplary model is for this community Jesus of Nazareth. This practical ethic of love only becomes possible for us in this new, post-theological, context when our neighbour has really been *noticed* by us with all their particularities. We have to learn to accept that our neighbours' (both Christian and those from other faiths and none) creeds and practices are the things that feed them and make them what they are in the world, to them these things are not merely accidental matters of taste but essential to their well-being in the world

Only then will we be able truly to meet our neighbours as they are and, rather than being eternally disappointed and frustrated by our inability to share each others' hay or bones, come to that for which we have longed for so long, namely, a unity based upon genuine reciprocal love.

(For much of what I say in the last few paragraphs I am indebted to James C. Edwards - especially his Ethics without Philosophy" p. 243. He is writing about Wittgenstein's thought. Edwards has been hugely influential on my thinking - though I hope you realise I'm to be blamed for the stuff on this blog, not him!).
Email Post
Labels: dog and a horse Ernst Bloch Ethics without Philosophy James C. Edwards Jesus permanent Robert Travers Herford Theodore Parker transient unity Wittgenstein
Andrew James Brown
My name is Andrew James Brown. I’m a philosophically/theologically inclined writer with sympathies towards Shin’ichirō Imaoka’s understanding of free religion (自由宗教), Christian atheism, D. G. Leahy’s “thinking now occurring for the first time”, a Lucretian inspired religious naturalism, new materialism and Kyoto School philosophy; also a photographer, cyclist, walker and jazz bass player. In addition to this, I’m the minister of a small, liberal, free religious community in Cambridge (UK)

Yewtree said…
I definitely agree that the universalising tendency is specious. I think it is possible to recognise and learn from similar ideas in other traditions, but that's not quite the same as trying to find the Platonic form behind them and discarding the local particularities (and I don't believe in Plato's world of ideal forms, anyway).

There is another basis for the liberal form of religion, however. It is constantly asking the question, "Cui bono?" (who does it benefit?) and "does it work?" (i.e. does it benefit anyone?) and "how could it be improved?" and perhaps "who is excluded (and does it matter or not)?" The last one is harder to ask but if we have no boundaries then we have no centre.

Absolutely, I couldn't agree more Given my socialism I am always reminding people to apply Lenin's famous question: "Who, whom?" By which he hoped to encourage people always to be asking, who does what to whom and who suffers and benefits as a result?

I last used it in the following blog but it's all over the place.