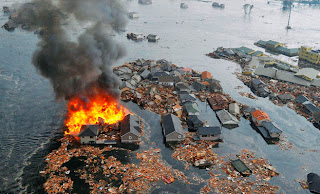 Over the past few weeks I have been encouraging us to think about the Sublime. I have been doing this because I think a reconnection with the Sublime can provide the energy for liberal forms of religion that we have lost as, both individually and collectively, we continue to find the idea of a supernatural interventionist God - even a loving - less and less compelling. Our sense of what we might meaningfully call the divine is becoming a more and more down-to-earth.

The Sublime is, I argue, that wholly natural expression of this which simply shows - instantly and without any intellectual work as God once did - the fragility and beauty of human-life and, additionally, why we must gather together in loving communities to support each other in the always difficult task of creating meaningful and fully flourishing lives. Because I think the Sublime shows this clearly and naturally it effectively sidesteps the insurmountable difficulties most liberals have with belief. You have to believe in God for God to be a powerful energy for you, but you don't have to believe in the Sublime to touch its life-giving energy because it shows itself to us clearly. But what it clearly shows is, of course, is not precisely some identifiable 'thing' at all but simply the 'greatness with which nothing else can be compared and which is beyond all possibility of calculation, measurement or imitation.' As such, in a special non-theistic way, it seems worthy of what we might call a kind of worship. It is a non-theistic sense of the divine.

I am pleased that many of you have appreciated what I have been trying to say, but it is a measure of the difficulties I face in trying to talk about the Sublime in the safe and comfortable environment that is Cambridge, that a few folk strongly express their feeling that I am simply talking utter nonsense and merely playing cleverly with words.

I don't think I am, but I want to acknowledge something very real that may lie at the back of such criticism. It may reflect a recognition of the danger that an intellectually-minded rational church tradition such as our own - and someone like me - is always susceptible to, namely, that we can neglect life for books. As the environmental ethicist Philip Cafaro noted, it is a feature of our post-modern age that we all too easily 'divorce texts from lived contexts and set them up as their own realities' (Thoreau's Living Ethics, University of Georgia Press 2004, p. 4) and he continues by noting that, 'this cuts the scholar off from the world, himself and his fellow men, in one fell swoop [and that] even the greatest books can play the role of cereal box reading in our lives, lulling rather than stimulating thought. At bottom,' he concludes, this time-passing stems from laziness and a distrust or fear of life' ( ibid., p.7).

But this is precisely why I am encouraging you to look at poets and writers like Lucretius, Wallace Stevens, Robinson Jeffers, Mary Oliver and Henry David Thoreau - because their writing is always concerned to push us back into the world and to survey whatever we see with a steady, clear-eyed acceptance. It is also why I am particularly desirous to encourage you to consider the philosophies of Nietzsche, Wittgenstein, Tolstoy and Heidegger because they, too, want to push us back into a real and direct encounter with the world and survey it with a steady, clear-eyed acceptance. All of these writers want to shake us from our laziness and stop us fearing life - and so do I.

So I strongly refute the charge that I'm merely playing with words.

It has to be admitted, however, that the difficulty I have just outlined remains and in this week's address, constrained as it is by the form our services take (which we could change, of course) I would simply have offered you some more words from the aforementioned writers in the hope that they may help you do what *you* need to be more fully in the world. But this week I don't really need to appeal to any readings about the Sublime - clever of otherwise - because all I have to do is remind you of the images we will all have seen of the Japanese earthquake and the awful tsunami which followed.

Last week I introduced you to Albert Gelpi’s description of the Sublime which we will revisit now but, this time, as I go through it, I will remind us of some of the real things we have seen. (It comes, remember, from Albert Gelpi’s introduction to The Wild God of the World – An Anthology of Robinson Jeffers, Stanford University Press 2003, p.13).

'. . . the physical conformation and psychological affect of the sublime landscape dwarfs the physical presence of the beholder so overwhelmingly that he or she feels psychologically reduced to the point of annihilation or absorption into the awesomeness of what he or she beholds.' I think this opening sentence pretty much speaks for itself. Every second of all we beheld on Friday showed this. All of us experienced - even thousands of miles away in the safety of our Cambridge homes - the overwhelming and awesome nature of that wave with its power utterly to annihilate and absorb a human being.

He continues: 'Characteristic features of the sublime include vastness of scale that suggests infinity.' Here I cannot but think of the pictures of wave after wave coming out of the clear horizon merging with the sky itself. (After the service one member of the congregation reminded us all of Hokusai's 'Wave' a painting which should strike us as an expression of the Sublime but which has often been appropriated - wrongly perhaps - as being beautiful).

Another characteristic he says are ' . . . jagged and broken lines' and I think here of the footage of the miles and miles of broken railway lines and the countless distorted and twisted roadways which had fractured leaving deep crevices into which people, cars and buildings had collapsed. I think, too, of the jagged and broken edges of the waves as they struck obstacle after obstacle.

Other characteristics were the '. . . extremes of soaring heights and dizzying declivities.' Here I think of the frightening footage taken from outside in the street which showed soaring skyscrapers rocking from side to side and also of footage taken from the inside of those same buildings in which we looked dizzyingly down into the gaping declivities between the swaying buildings, a nightmarish abyss into which the person filming might fall at any moment.

Another characteristic were the '. . . intense contrasts of brightness and dark.' Here I think of the bright, light fields of crops which we saw being remorselessly eaten-up by the speeding dark and muddy churned-up water of the tsunami. Within this contrast there was also another, that of the bright flames of burning whole buildings being swept along faster than people could drive their cars.

Can we, today, really say Gelpi's words about the Sublime are merely clever ones - disconnected from the real world? I don't think so. I think it is clear that his words are true words. I'm sure most of you felt them to be true but, today, thanks to modern telecommunications, the truth of what is meant by the Sublime has crashed directly through the safe walls of our Cambridge homes and punched us in the core of our being. We have seen - really seen - how powerless is human-kind in relation to the awesome power of nature and this is now a global memory and it may have served to join us closer together than we were only a week ago. (This is particularly important as we seek to create a global awareness of the dangers of climate change.)

It is important to acknowledge that what we all saw on Friday was not beautiful - how could it be? Instantly, as we saw that wave smash its way across the landscape we all knew how dreadful this was. We knew, instantly, what kind of horrors people would be experiencing and will continue to experience in the coming weeks, months and years.

But I think most of us here know, really know, that neither was what we saw evil. In the earthquake and the tsunami there was present no divine agency and no wilful God (judgemental or loving) was at work. No, the earth simply moving, ever so slightly, her sublime, wild body.

But we cannot remain in direct daily contact with the Sublime at this kind of level and intensity - it is too much, way too much for human-kind to endure for any length of time. The Sublime is super-human (though not super-natural) and because we are human it is to the human world that we must return. We have to respond to this event in a way that is both free and creative and which does not fall into either nihilistic despair nor into fantasy, denial and forgetfulness. Importantly it must be a response which keeps alive in our whole way of being-in-the-world the knowledge of our intimate comminglement in the Sublime natural order of things.

To conclude I have to return here to some cited words to illustrate the real work that is to be done and with them I will finish. Gary Snyder - the poet, ecologist, eco-warrior and Buddhist -offers this thought in his book 'The Practice of the Wild':

'To be truly free one must take on the basic conditions as they are – painful, impermanent, open, imperfect – and then be grateful for impermanence and the freedom it grants us. For in a fixed universe there would be no freedom. With that freedom we improve the campsite, teach children, oust tyrants. The world is nature, and in the long run inevitably wild, because the wild, as the process and essence of nature, is also an ordering of impermanence' (Gary Snyder in The Practice of the Wild found in The Gary Snyder Reader, Counterpoint Washington D.C. 1999, p. 168).

The Sublime event we saw in Japan is the condition of our human freedom and for that we must be grateful. May our brothers and sisters there find a way beautifully to order once again the impermanence so as to improve the campsite (the place they live), teach their children, and oust tyrants. But more than that, may all of us around the world who also witnessed the tsunami roll in do likewise, for it is clear that our own campsites need improving, our own children are poorly taught, and there remain too many tyrants in our midst.