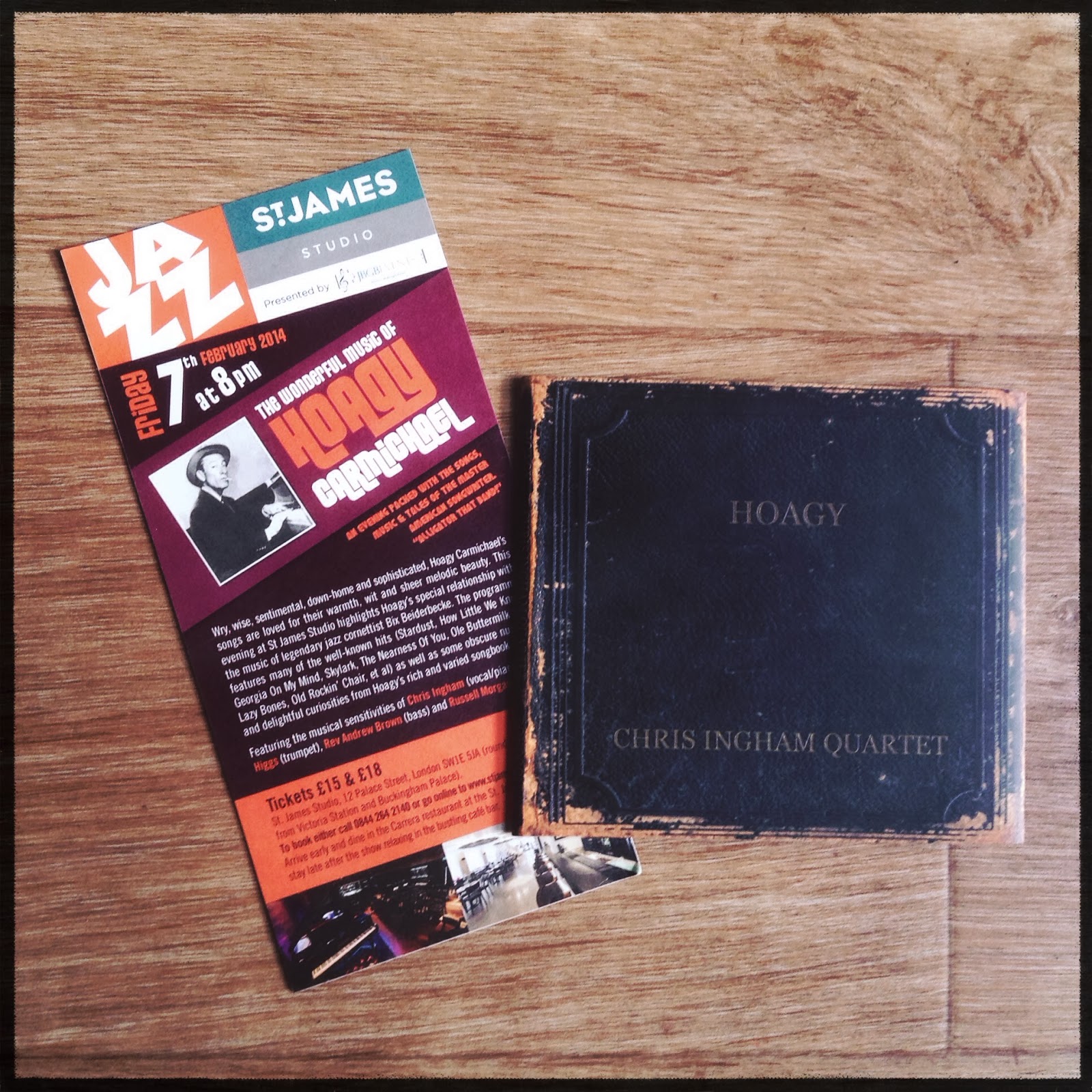 This week Georgia has very much been on my mind, not only Georgia, but also Memphis in June. Why? Well, on Friday one of the bands I still play and record with - the Chris Ingham Quartet - launched a new CD at the wonderful, still very new central London venue the St James Theatre. The CD is simply called, "Hoagy", and in it we celebrate the songwriting of the wonderful and extraordinary Hoagy Carmichael.

Anyway with the gig coming up the music of his songs and the words of his various lyricists were running round my head when, on Monday, I went for a long walk around Wandlebury Hill Fort up on the Gogs and then along the Roman Road.

Another thought that was in mind as I rambled around was one offered up by the contemporary neo-pragmatist philosopher Richard Rorty. I was reminded (by Gianni Vattimo in his "Nihilism & Emancipation" Columbia University Press, 2004, p. 23) that Rorty felt writers like Nietzsche and Hegel, "exactly like Proust, are the authors of novels, since all philosophies are no more than extended redescriptions of the world on the basis of a system of images and metaphors, forms of subjective expression similar to literary creations". In fact, according to Rorty, "Proust . . . is superior to Hegel and Nietzsche in one point at least: he was aware that he was writing a novel, whereas the other two, even Nietzsche, wanted to proclaim truths. They were still putting forward metaphysical claims".

Now I don't propose to discuss or defend Rorty's basic claim here and now in this address - I can do that another time if you wish - here I'm only going note that, basically, I agree with him and so, throughout the day up on the Gogs, the ramifications of this thought were also mingling with Hoagy's timeless songs.

Before I can begin to weave these two threads together into some (possibly) meaningful fabric I need to tell you a little about a couple more threads that make my cloth possible. The first of these is T. C. Lethbridge's oh, so strange, hill-figure.

In 1919 Lethbridge had gone to Trinity College, Cambridge where he began to become very interested in archaeology such that, on completing his degree, he began working as a volunteer digger for Louis Clarke who was, at the time, the curator of the Archaeological Museum in Cambridge. Despite having a private income, Lethbridge became for a while the keeper of Anglo-Saxon antiquities at the museum and he remained in the city until 1957.

During the autumn of 1954, Tom Lethbridge was the director of excavations for the Cambridge Antiquarian Society by which time he had got it into his head that he should search for the missing chalk-figure, the "Wandlebury Giant." The story goes that his interest in this had earlier been peeked by a conversation with a certain a museum assistant whom he had worked with, Sammy Cowles. This colourful figure told Lethbridge that, as a child he had spoken to an old man who remembered from his own childhood days being able to see the Giant from Sawston (T. C. Lethbridge: Gogmagog - The Buried Gods, Book Club Associates 1975 - first printing 1957, pp. 5-7).

Following this Lethbridge became aware of the other allusions to a hill figure that had once been carved into the slopes of the Gog Magog hills and he became increasingly obsessed, not only with rediscovering it, but also of restoring it to its former glory. In our readings you heard a short précis of this very strange, intricate story (please do click on this link to read this short précis. It is called The Myths and Legends of Wandlebury which you will find half way down the page).

And now my final thread. As a thirteen year old I was captivated by a BBC TV series written and presented by James Burke called "Connections". The conceit of the series was simple. To quote from the concise description of the series at Wikipedia: "It took an interdisciplinary approach to the history of science and invention" in which Burke contended that we could not "consider the development of any particular piece of the modern world in isolation. Rather, the entire gestalt of the modern world is the result of a web of interconnected events, each one consisting of a person or group acting for reasons of their own motivations (e.g., profit, curiosity, religious) with no concept of the final, modern result to which the actions of either them or their contemporaries would lead."

Burke's TV series profoundly influenced me and since then I've always been on the alert for possible real connections that might be made between even the most unlikely of bed fellows, such as Hoagy, chalk hill-figures, and philosophers as novelists. This explains why the basic question that showed up before me as I walked was whether there was any meaningful connection between them and, if so, what was it and was it of any practical import?

Although there are likely to be possible alternatives, the interpretative (hermeneutic) key that serves for this address suddenly showed up when I remembered the story the pianist and singer Chris Ingham tells during our concerts about the writing of tunes like "Memphis in June" and "Georgia On My Mind". The extraordinary thing is that when Hoagy wrote these songs with his co-writers Hoagy himself had never been either to Memphis or Georgia - in short, his songs create imaginary, archetypal  worlds. It's important to hang on to this thought. Although, as Chris points out, "Hoagy always claimed he was a discoverer of tunes rather than a composer" I think that, by this, he meant he understood himself to be discovering something true, not about music in some abstract absolute sense, but rather about music's extraordinary power to evoke in listeners (and, we may presume, in himself) certain moods that helped attune us to perennial aspects of the human condition - of what it is to be in the world. In the imagined localities of Memphis and Georgia he touched upon something that it feels appropriate to call "universal" - (or, at least, universal for the kinds of beings human-beings are).

Having just spent a great deal of time listening to and playing through the songs of Hoagy and his collaborators I am powerfully aware of their extraordinarily consistent ability to create fictions and moods by which we can genuinely live - fictions and moods which remain capable of delivering up to us vision of the kind of hope, joy and laughter that are so necessary for the living of a good and satisfying human life. It simply doesn't matter that he had never been to Memphis or Georgia or, of course, flown on a Skylark's wings because what he saw (or "discovered") in his fictions were things universally relevant to us all in our humanly-being. This is statement is based, not only on my delight and that of the other members of the band, but also the evident delight and enjoyment that we have experienced in our audiences. The themes and moods of Hoagy's songs are clearly as relevant today as they ever were - true, they may not be to the taste of every listener, but taste, well, that's another matter.

So, to begin to sum up. Hoagy may have thought he was discovering tunes but he was always well aware he was writing fictions and, in this sense, his work is clearly closer to that of Proust than it is to Nietzsche and Hegel. His songs are clearly not presentations of fixed and eternal metaphysical truth but are, to go back to Rorty's point, wonderful redescriptions of the world on the basis of a system of images and metaphors (drawn in this case from the southern states) and forms of subjective expression (Hoagy and his co-writer's personal feelings about what had meaning and worth).

What I like about great fiction - and make no mistake Hoagy and his collaborators produced some truly great fictions - is that they are always open to reinterpretation and adaption. It is this that makes them still living and relevant texts. As I am fond of reminding you, I wholly agree with Iain Thomson who said that:

". . . what makes the great texts "great" is not that they continually offer the same 'eternal truths' for each generation to discover but, rather, that they remain deep enough — meaning-full enough — to continue to generate new readings, even revolutionary re-readings which radically reorient the sense of the work that previously guided us" (Figure/Ground Communication interview).

The problem with Lethbridge, on the other hand, was that he completely failed to see he was creating and presenting a fiction to himself and his audience. In this sense his work is closer in intent to certain philosophers in that he thought he was proclaiming, if not a full-blown absolute metaphysical truth, then at least an absolute historical truth about the ancient Gods. His book is full of this attitude expressed in the use of phrases like "It seems certain" (cf. T. C. Lethbridge: Gogmagog - The Buried Gods, Book Club Associates 1975 - first printing 1957, p. 158) and "I feel quite certain" (Ibid, cf. p. 159). Lethbridge is in the business of closing down openness because he believes he is heading unerringly towards the final truth of the matter. This is why, in so many ways, the text of Lethbridge's book, "Gogmagog: The Lost Gods" is not an open and living text in the way Hoagy' songs still are (and why, of course, you will only find second-hand copies of Lethbridge's book and yet Hoagy's songs are still played and reinterpreted by countless jazz bands around the world).

So what lesson might we learn from this unexpected connection between chalk hill-figures and Hoagy? Well, I think it is that, in religious circles - even liberal religious circles, we are always in danger of being "Lethbridge-like" in believing we can discover and present to others final truths. The tendency to believe this is becoming ever more prevalent in our contemporary world with the resurgence of fundamentalist religion and politics.

But we can help head-off this danger whenever we take care consciously to remind ourselves that in religion (at least the kind of religion we try to espouse here) we are always-already in the business of creating redescriptions of the world on the basis of a system of images and metaphors and forms of subjective expression. What we are always-already doing is to try to write for our own age and time what Wallace Steven's called "supreme fictions" - stories by which we can live with full belief (pathos) and a clean heart. Here in Cambridge I hope we are consciously trying to discover, not absolute metaphysical truths, but simply stories we can live by and learn from and, in this task, we have much to learn from Mr Hoagy Carmichael.
Email Post
Labels: chalk hill-figures Chris Ingham Gianni Vattimo Hoagy Carmichael liberal religion Richard Rorty T. C. Lethbridge Wallace Stevens Wandlebury Wandlebury Giant
Andrew James Brown
My name is Andrew James Brown. I’m a philosophically/theologically inclined writer with sympathies towards Shin’ichirō Imaoka’s understanding of free religion (自由宗教), Christian atheism, D. G. Leahy’s “thinking now occurring for the first time”, a Lucretian inspired religious naturalism, new materialism and Kyoto School philosophy; also a photographer, cyclist, walker and jazz bass player. In addition to this, I’m the minister of a small, liberal, free religious community in Cambridge (UK)