The Cambridge Unitarian Church as an example of a ‘real utopia’?—An encouragement to read Erik Olin Wright's ‘How to Be an Anticapitalist in the Twenty-First Century’ 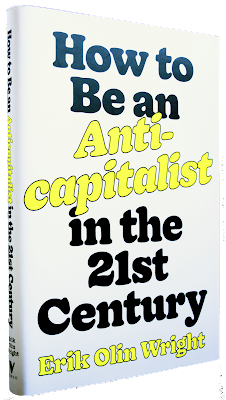 For last Sunday’s service I wrote a piece called ‘A world without gain?—An address for Fairtrade Fortnight meditating on a thought by Karl Polanyi and with an after-thought drawn from Paul Mason’ in which I asked the following question:

What would fair-trade look like in a world that had been able to free itself from the motive ‘gain’ as its central principle and which has an economic system run on noneconomic motives and which organizes itself on the principles of reciprocity or redistribution, or householding, or some combination of the three?

After giving the address, both in the period of conversation in the service itself and during the bring and share lunch afterwards in the hall, I was asked about what my own practical answer would be and I pointed people in the direction of Paul Mason’s books Postcapitalism: A Guide to our Future and Clear Bright Future: A Radical Defence of the Human Being.

But those conversations reminded my of a recent — but not close or complete — reading of Erik Olin Wright’s (1947–2019) book of 2010 called ‘Envisioning Real Utopias’ and I made a note to myself to take another look at what he had to say in that book.

Then, on Tuesday, I finally got round to reading through some of the essays in the latest edition of the New Left Review to which I subscribe and, to my delight and surprise, discovered the essay by Michael Burawoy called ‘A Tale of Two Marxisms: Remembering Erik Olin Wright (1947–2019)’ in which Burawoy points to Polanyi’s work as a way by which the two Marxisms displayed by Wright in his career (the scientific and the critical) might be brought meaningfully back together. I think Burawoy is on to something here but that topic is for another post on another occasions.

Anyway the presence of Polanyi’s thinking in the context of an essay on Wright put wind into the sails of my decision to look again at Wright’s ‘Envisioning Real Utopias’.  I pulled it off my bookshelves and quickly remembered why two years ago I had put it aside to read later on. You see it’s a big, well-researched and detailed book — that’s fine, I like books like this — but back then I simply didn’t have either the sufficient head-space or the time to tackle it properly. However, on this occasion, for obvious contingent reasons, things are different and so I will now properly work my way through it. However, in Burawoy’s essay I read these words:

The eloquence and optimism that he exuded drew enthusiastic supporters; Envisioning Real Utopias, bulky though it is, was translated into many languages. But Erik knew it might be more effective if there was a shorter popular version, more like a  manifesto. He  managed to complete ‘How to Be an Anticapitalist in the Twenty-First Century’ in 2019, before he died.

OK, the way forward was now clear, it was to get a copy of ‘How to Be an Anticapitalist in the Twenty-First Century’ and read that, watch on YouTube a couple of Wright’s own talks about the book, and then settle down to read the magnum opus from which the shorter book was born.

So, I now have a copy of the shorter book and I have watched a couple of YouTube videos (HERE and HERE) and everything so far suggests that Wright offers some very, very amenable, interesting and practical ways to begin to answer the question I posed in my Sunday address. So watch this space and also, perhaps, consider starting to explore his thinking yourself.

The first is that Buraway’s essay reminded me that Wright came from a Unitarian family, was involved in Unitarian youth groups and also, in part to avoid the draft, that he entered into the Starr King School for the Ministry in Berkeley so as to get a ministerial deferment. This move took him, in turn, to Oxford University and Balliol College (where he studied with, amongst others, Christopher Hill — one of my own intellectual heroes) and then into a year-long internship as a student chaplain at San Quentin Prison. [You can read Wright’s own short autobiographical piece at this link.]

The second Unitarian reason is that Wright’s description of in what a ‘real utopia’ consists describes well what it is I think we are trying to create here in the Cambridge Unitarian Church. The following words come from this interview between 6’38”-7’21”:

[To be a ‘real utopia’ any institution] has to in some way or other embody values of equality, democracy, community and sustainability — in some mix embody those values. It has to be something that can be created in the world in which we live — people are trying to build this now — but it points towards an alternative way of life into the future. It’s kind of like, you know, the famous Gandhi slogan which, actually, Gandhi never said: be the social change you want to see in the world . . .  This is sort of: create the institutions you want to see in the world — create them now rather than wait for the future.

Anyway, all in all, Erik Olin Wright is clearly a person who should be of interest to those of us in progressive, liberal religious circles who can see that capitalism — with it’s central principle of gain — is now so dysfunctional and world-destroying that it must genuinely be left behind in some fashion so that something new based on equality, solidarity, democracy and love can emerge.
Email Post
Labels: Cambridge Unitarian Church capitalism Envisioning Real Utopias Erik Olin Wright How to Be an Anticapitalist in the Twenty-First Century Karl Polanyi Michael Burawoy Paul Mason Unitarian Universalist
Andrew James Brown
My name is Andrew James Brown. I’m a philosophically/theologically inclined writer with sympathies towards Shin’ichirō Imaoka’s understanding of free religion (自由宗教), Christian atheism, D. G. Leahy’s “thinking now occurring for the first time”, a Lucretian inspired religious naturalism, new materialism and Kyoto School philosophy; also a photographer, cyclist, walker and jazz bass player. In addition to this, I’m the minister of a small, liberal, free religious community in Cambridge (UK)