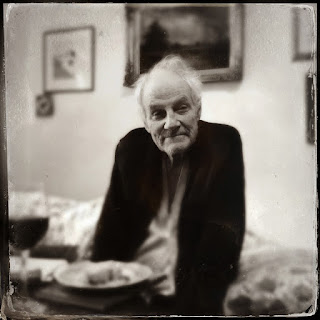 This week saw the anniversary of the death of an old friend, philosophical mentor and, in his latter years, member of this church community, Jonathan Harrison. Next Tuesday, September 22nd, would have been his 96th birthday.

For these and other reasons, Jonathan’s friendship and work was very much in my mind this week and on a number occasions I stopped with a cup of tea in my hand to look at the photo of him on my mantelpiece which I took in his house a couple of years before his death as we ate fish and chips together, polished off a nice bottle of wine (a glass of which you can see in the photo at the top of this post) and talked philosophy and religion on into the afternoon. In the last two years of his life this became a regular bi-weekly event to which I always looked forward and thoroughly enjoyed.

Jonathan was hugely important to me in my role as a minister of religion because he helped me work carefully through the implications of being, like him, what he called “that embarrassing, but not”, he thought, “uncommon thing, an atheist who has what appears to be [an] experience of the deity whom he believes not to exist” (God, Freedom and Immortality, p. 681).

Like Jonathan, I have continued to value hugely many aspects of my inherited liberal Christian tradition even as my belief in the existence of God has completely dissolved. Like him I continue to think that,

“Living a spiritual life may be regarded as paying attention to such intimations of the divine as one has in this world, without our having thought to any other world. Paying such attention might not suit everybody. I suspect doing so is more a matter of prudence than of morality. To love God, if I am right in thinking that it is possible to love a nonexistent God, cannot benefit him, for he does not, strictly speak, exist, but to love him may be of benefit to oneself” (God, Freedom and Immortality, p. 671).

In these difficult and discombobulating times — as I continue to explore the many, what seem to me, still undischarged energies to found in our religious tradition, even after the death of God — my paying attention to such intimations of the divine as I have in this world, without my having thought to any other world, continues to help me negotiate (or at least begin to grapple with) the many significant and challenging “downs” I am currently experiencing as I view the current socio-political-ecological situation both in the UK and the wider world. I realise, of course, as did Jonathan, that “paying such attention” might not suit everybody but it might, just, suit one or two of you. Consequently, on the anniversary of his death and close to his birthday, I’d like to take the opportunity to reintroduce you to some of his thinking which can be found in the address I wrote for the congregation back in 2014 immediately following his death. You can find this at the following link:

In Memoriam: Jonathan Harrison (1924-2014) — On the religious benefits of running with the hares and hunting with the hounds and of having one’s cake and eating it

Jonathan thought — and I still, more or less, agree with him in this — that many of Christianity’s significant disadvantages might yet be overcome and he was prepared to state clearly that “the Christian ethic,” at least subject to the many criticisms he made of it, remains “a good one, though nothing in this world is perfect. It offers solace, comfort and help and the possibility of spiritual quietness, rest and solace which many sorely need and from which,” Jonathan suspected, “most would benefit” (God, Freedom and Immortality, p. 662).

But, as Jonathan also said, Christianity was not the only religion to provide such benefits and, although he hoped otherwise, he thought it was “unfortunate that these benefits are usually . . . bought, in their Christian form, at the price of accepting superstition and bad metaphysics” (God, Freedom and Immortality, p. 662). 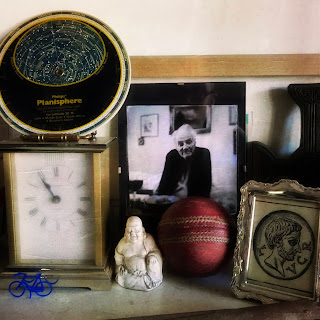 In the kind of dark, pandemic days in which we currently find ourselves, it is all too easy, as the Roman poet Lucretius recognised, for superstition and bad metaphysics significantly to begin to enter back into our lives and practices. I think that Jonathan’s philosophy — and I hope my own philosophy informed by his teaching and friendship — can still play a modest role in bringing into the open some of the undischarged benefits and energies of this Unitarian church’s liberal Christian tradition but without, at the same time, ever requiring you to accept any kind of superstition and/or bad metaphysics.

But whatever you think about all of the above, sometime on Tuesday evening, Jonathan’s birthday, why not raise a toast to one of Britain’s unsung philosophers and a much valued member of this unusual congregation.

Steve said…
He sounded an interesting man and someone, like yourself, that I would have found companionable. I will look up his book. I have long thought that the OT definition of God, Yahweh, 'I am what I am' (I will be what I will be) covers all. Like Jonathan, I follow and pray to a God I am not sure exists. And yet He touches me in his non existence! That is why I can't quite be an atheist. In a way, faith makes God real (something quantum there...). Tis mystery all. Thank you for your blog.
20 September 2020 at 09:47

Thank you for writing -- yes, Jonathan was very companionable indeed. I still miss him.

On your pertinent point about not quiet being an atheist it's perhaps worth considering someone like Henry Bugbee (a favourite philosopher of mine) who Quine thought was best described as articulating an atheistic mysticism. That's a pretty good term for my own position and it might (or it might not!) have a certain appeal for you, too.

I hope all remains well with you and yours and thanks again for writing. Much appreciated.
20 September 2020 at 18:40

Steve said…
Thanks for that, Andrew. One final point - atheistic mysticism was a line Don Cupitt (Sea of Faith) was drawn to in some of his (many) writings. I suppose my own stance is that the only honest position on 'God' must be agnosticism. I used to enjoy Cupitt's writings but, as with Richard Dawkins, the certainty of 'now we know there is no god' irritated me! If only it was that simple. I see theology as 'merely' opinion, but fascinating opinion at that.
I rather like the Eastern Orthodox definition of a theologian - a man (woman) who prays, rather than the western, academic way of seeing things.
Personally I pray with hope but no expectation - it saves disappointment.
I will look up Henry Bugbee.
All the best,
Steve
20 September 2020 at 21:48

Thanks for this exchange.

Perhaps, not surprisingly, I’ve spent a fair bit of time in conversation with Don over the years. When I was 19 the “Sea of Faith” TV programme aired (1984) and it had a big influence upon me, introducing me properly to, in particular, Nietzsche and Wittgenstein. When I came to Cambridge as the minister that gave the opportunity to get to know him personally just a little.

Like you, I struggle to deal with the idea of “now we know there is no god”. However, once again, I think there is some kind of middle ground and a place for an atheism which doesn’t fall into false certainty. It's a progressive atheism which has discovered some very good, sound reasons (both scientific and philosophical) to deny the existence of the god of theism (and, therefore being an a-theist) but which then tries to proceed without going on absolutely to deny the existence of something that might (on occasions) still meaningfully be gestured towards by using the word “God” — albeit used in a radically different way from the way it is used within the (mono)theistic traditions).

The most interesting thinker I know exploring this line of thought is the contemporary Canadian philosopher, J. L. Schellenberg. If you search my blog for that name you’ll find a few addresses drawing on his work but here are three external links for you that you might enjoy following up: