This monument is for the unknown good in our enemies—A few thoughts on the idea of the "the Good" (or "God") in the context of Remembrance Sunday and Armistice Day, drawing on a poem by the American poet and pacifist, William Edgar Stafford (1914-1993) 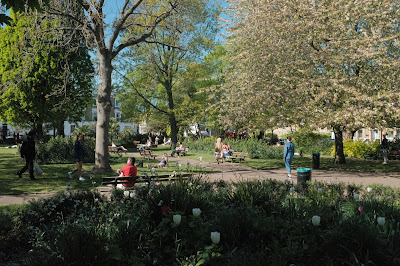 I begin this podcast containing a few thoughts related to Remembrance Sunday and Armistice Day with a short poem read by Susanna Brown called, “For the Unknown Enemy”, written by the American poet and pacifist William Edgar Stafford (1914-1993):

This monument is for the unknown

their life began to appear: they

gathered at home in the evening

and sang. Above their fields they saw

a new sky. A holiday came

and they carried the baby to the park

for a party. Sunlight surrounded them.

Here we glimpse what our minds long turned

away from. The great mutual

blindness darkened that sunlight in the park,

and the sky that was new, and the holidays.

This monument says that one afternoon

we stood here letting a part of our minds

escape. They came back, but different.

Enemy: one day we glimpsed your life.

This monument is for you.

At this time of year when the nation remembers some — and it has only ever been some — of the allied soldiers who were killed in the Two World Wars and many conflicts since, I often turn to Stafford’s poem because in it, heeding the call of Jesus to love our enemies, Stafford explicitly calls upon us also to remember those who were and, perhaps, still are, our enemies. It’s a poem which helps us think about our common humanity even as we find ourselves in a national moment which foregrounds, as Rabbie Burns memorably wrote, “Man’s inhumanity to man” that “Makes countless thousands mourn!” (Robert Burns: “Man was made to mourn: A Dirge”, 1784).

To many people the power of Stafford’s poem can seem to be reliant upon the reader believing it is possible for us, even if only for a moment, to stand outside, or at least very high above, our everyday, local world of minute particulars so as to see something eternal, trustworthy and good which our culture has liked to believe must be “universal” — i.e. that which, behind the scenes, unifies our world despite its many real, or perhaps, only imagined, divisions.

However, we live in an age and culture where all appeals to a transcendental universal — whether it is called ‘the Good’ or ‘God’ — no longer have the persuasive, energising power they once had. We now doubt, with great and justifiable doubt, that ‘the Good’ or ‘God’ exists, or ever existed. We also now live in a world which our natural sciences are strongly suggesting is not dependent upon the existence of something supernatural, static and eternal like ‘the Good’ or ‘God’ but in a pluralistic universe that is always-already constantly in motion, intra-active and indeterminate. Not surprisingly these changes in our basic world-view might seem terminally to undercut the universalist tenor of Stafford’s poem leaving it as a mere whistling in the wind. Poignant and beautiful, yes; but true? No.

However, or so it seems to me, in order meaningfully to reconnect with the energising power of Stafford’s vision and others like it, all we need to abandon is the idea that those things we liked to call universal, such as ‘God’ or ‘the Good’, were ever existent things at all. A certain kind of examination of the ideal or idea of the universal suggests that it might better be thought of as being nothing (a no-thing), not any thing at all but rather that which helps us talk about, and draw certain conclusions concerning how our life ought to be lived. The ideal or idea in this understanding is, then, a kind of moving, groundless ground which makes this, and perhaps all, conversation possible.

Surprisingly, and importantly I think, this rather more fluid, processual and conversational way of understanding the idea or ideal doesn’t rule out of play a poetic, rhetorical appeal to ‘God’ or ‘the Good’, even though it becomes an appeal to a ‘God’ quite unlike that envisaged within the theistic traditions or ‘the Good’ envisaged by the Platonic traditions .

To show you what I mean I need briefly to return to the naturalistic, even atheistic, definition of God proposed by the philosopher John Dewey (1859-1952). In his influential short book from 1934 called “A Common Faith” he wrote:

“We are in the presence neither of ideals completely embodied in existence nor yet of ideals that are merely rootless ideals, fantasies or utopias. For there are forces in nature and society that generate and support the ideals. They are further unified by the action that gives them coherence and solidarity. It is this active relation between ideal and actual to which I would give the name ‘God’. I would not insist that the name must be given” (John Dewey: A Common Faith, 2nd ed., Yale University Press, 2013, p. 47).

At least as I now read it, Stafford’s poem is an encouragement to, and a place where we can, start to bring together the ideal and actual in active relation and so set going anew in our own doubtful and sceptical time the slow, human process of trying to build a better world for all, for friend and enemy alike.

On the one hand the ideal is that friend and enemy are, in important and recognisable respects, fundamentally the same and that all people contain ‘the Good’ no matter how hidden from us it may be. It’s an ideal which for us finds its most iconic form in Jesus’ summation of the law and the prophets (Mark 12:28–34), namely, that before anything else, we are called upon to love God (or ‘the Good’) and our neighbour (which includes our enemy) out of our whole heart, soul, reason and strength. As Jesus says,  “There is not another commandment greater than these.”

On the other hand, Stafford’s actual includes the recognition that, in other important and fundamental ways, we and our enemy were not, nor ever could be, exactly the same — identical and indistinguishable from each other. The truth of this is shown by the fact that we can only begin to bridge the differences that exists between us when, through the power of imagination, we find the courage to let our minds escape and join our enemy in their evening songs and their party in the sunny park on the following day as if we were ourselves, in fact, the enemy. We also know, as did Stafford, that our wholly contingent, different, general background contexts, upbringings, experiences and understandings about how the world is (or should or shouldn’t be) are often very different even from those of our friends, let alone our enemies. Yes, we and our enemy do all sing songs in the evening and, on the day after, under a common new sky and sun we are all inclined to carry the baby to the park for a party. But let’s be absolutely clear about this, we know full well that our songs could be as different from each other as is the ‘Internationale’ from the ‘Horst Wessel Song’, and our toasts at the party could be as different in hope, content and intent from those raised to Socialism on the one hand, or to Fascism on the other.

In Stafford’s poem the ideal and the actual are brought together and, at the place and in the moment of their meeting — such as when we read the poem — we find that, although we are clearly in the presence of an ideal which is not yet completely embodied in existence, we do find that the ideal of ‘the Good’ (or ‘God’) being in everyone is not merely a rootless ideal, fantasy or utopia because around and within us we can also sence forces at work in nature and society which can generate and support this ideal. We also know from experience that this ideal can further be unified by all the conversations and actions we make which give it the chance of achieving ever greater coherence and solidarity. As I say this, remember it is only the active relation — this nothing, this no-thing — between ideal and actual to which Dewey, and I, would give the name ‘God’ (or ‘the Good’) even though he, and I, no longer insist that these names must be given.

The intention of Stafford’s poem is not, therefore, to make a claim that the ideal of ‘the Good’ (or ‘God’) is a universal reality, and so something which can objectively be found in our enemy, no matter how hidden. Instead, his poem is simply aiming to get the relationship between the ideal and the actual started in the heads, hearts and, thence the hands, of his readers. Once this relationship, this conversation, has started, then, and only then, can the ideal begin, more and more, to connect with the forces existent in nature and society which can generate and further support the ideal and so, by degrees, stand a chance of becoming ever more actual and concrete in our everyday world.

What we see here is that although we may no longer believe there is such a universal thing as ‘the Good’ (or ‘God’), through our actions and conversations based on an encounter with the ideal there most assuredly come to exist countless, actual, concrete examples of good acts being done by people who have been and are willing to see the good in their enemy. Our primary model for what this looks like on the ground is, of course, quite literally, found in Jesus’ parable of the Good Samaritan.

According to this reading the sacred, human task is, therefore, always to be working conversationally, processually with the forces in nature and society that generate and support our ideals so as to give them ever more coherence and solidarity. As William Blake so perspicaciously observed (Ch. 3) in his long poem mostly, written between 1804–1820, called “Jerusalem: The Emanation of the Giant Albion”:

“He who would do good to another must do it in Minute Particulars.

General Good is the plea of the scoundrel, hypocrite, and flatterer;

For Art and Science cannot exist but in minutely organized Particulars,

And not in generalizing Demonstrations of the Rational Power:

The Infinite alone resides in Definite and Determinate Identity.”

And, although many of us may no longer be able to believe that ‘God’ or ‘the Good’ objectively exists behind the scenes somewhere, we can still affirm that good acts (and perhaps acts of god, too) continue to occur. In short, it is possible still to live with full belief and clean heart in the idea and ideal that there is good in our enemy, however unknown, and that, in actual peaceful conversations and acts of peace shown between us, the Good (and perhaps God) can become ever more visible and concrete in our everyday world.

If you would like to join a conversation about this or any other edition of this podcast then please note that our next Wednesday Evening Zoom meeting will take place on 18th November at 19.30 GMT. The link will be posted in the notes to the next podcast.

Those of you who have already listened to the podcast and who only wish to join in the conversation are invited to login to the meeting at about 19.55.