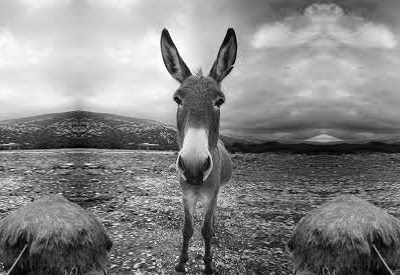 In moments of national crisis and despair such as the one through which we are currently living, there comes a time when it becomes necessary to make a firm decision about how one should, ethically, philosophically and religiously, go on. As the crisis and despair deepens it has become very clear to me that all equivocation about this decision must be set aside if one is not to meet the darkly humorous fate of Buridan’s ass which, standing forever undecided between two equidistant piles of hay, eventually dies of hunger.

But for many modern, skeptical liberals, making a decision to choose a particular bale of hay over another is incredibly difficult to do because, before they can choose with a clean heart and full belief (pathos) which bale of hay to eat from, they feel they must firstly be absolutely confident they have good and final justifications for making this decision.

Consequently, in my role as a liberal minister of religion, most of my writing and thinking is spent trying to clear away at least some the many complex problems that hedge us in everywhere so that, with clean hearts and full belief (pathos), the people with whom I regularly intra-act might better be able to discover sufficient justifications for choosing to move towards, and then eat from, some actual bale of hay and so avoid starving to death like Buridan’s ass.

But, speaking frankly, in the modern, liberal community context in which I work, the task of providing sufficient and acceptable justifications so that together we are able confidently to move towards, and then eat from, an actual bale of hay can often prove almost impossible. I try to clear away problem X by offering up justifications for why I think it’s OK confidently to move towards and eat from, say, bale of hay B. However, one person can’t see there’s a problem in the first place whilst another person thinks I’ve identified the wrong problem or, perhaps, that I’ve identified the right problem but in the wrong way. All of those things could be true, of course. One person thinks the justifications I offer up for choosing bale of hay B are good and sound, whilst another person thinks they are very bad and very unsound. One person thinks, “Yes! bale of hay B is the one to eat from” whilst another strongly disagrees and argues for bale of hay Z. Add to all the above my own inevitable, liberal doubts and vacillations, and I hope you can see that together as a community, especially in a time of national crisis and despair where so little seems clear, a situation can easily develop in which we risk hesitating endlessly between, not just two equidistant bales of sustaining hay, but countless numbers of equidistant ones. Ethical and religious starvation, exhaustion, paralysis and, finally, death threatens to overwhelm us.

However, as Wittgenstein realised, in every field of human endeavour there comes a point — often in just such moments of crisis as the one we are experiencing — when we find we have exhausted all justifications and we discover we have, so to speak, dug through all the available evidence and reached what Wittgenstein calls “bedrock.” It is at this point we discover that if we are to go on at all we must now turn our spade without further justification. When that happens, as Wittgenstein observes, then we are inclined to say: “This is simply what I do” (§217 Philosophical Investigations).

As we enter into this challenging New Year, in the midst of a profound and complex national crisis, I discover that, speaking purely personally, I have run out of justifications and, exhausted by everything that has been going on, I have reached my bedrock. The significant and liberating upside of all this is that I now know, deep in my bones, that if I am to survive this time well then I must now turn my spade in a particular way and say “This is simply what I do.”

Over the past twenty years my addresses, blog and podcasts have all been written and produced in the hope that something in them may resonate with you as you seek sustenance and an ethical, religious and philosophical way to proceed that you can adopt with a clean heart and full belief (pathos).

Generally, I try to present what I do in as gentle a way as possible by continuing to include in my pieces many justifications for why, with a clean heart and full belief (pathos), I think it’s both wise and OK for this local church community and its members, fully to commit to an ethical, and indeed religious and philosophically inclined, way of life based primarily upon following the practical examples of the human Jesus and Socrates.

Naturally, as a good liberal, I fully realise that there exist other ways of turning your spade and that other bales of hay are available to you. This is something that I will always make clear. But, today, we find ourselves in a time of real crisis and, to paraphrase Martin Luther, I have found that the extreme seriousness of our times forces me to be clear that:

My spade is turned, I can do no other. God help me! Amen.

In my ministerial role as both a liberal gardener of the spirit and — pun intended — as a liberal ass, I fully accept that I cannot hope to persuade all of you to turn your spade in the same fashion I have, nor to eat from the particular bale of mixed religious and philosophical hay I have chosen.

But what I can hope to do is to help you see that, in the end, no one can avoid the fact that the final turn of their own ethical, religious and philosophical spades must always be made without final justification and that all of us must also choose some actual bale of ethical, religious and philosophical hay from which to eat and draw strength if we are not to fade away and die.

So, my simple message to prepare you for the burdensome work of the coming year is this:

Like a good liberal gardener of the spirit please turn your spade; like a good liberal ass please choose to eat from some actual bale of sustaining hay. And, when you’ve done those things, I feel confident in promising that you will be in a much better state to play your own part in bearing the many burdens that are falling upon us all.