I think the thing which is continuing to disturb me most at the present time is that we have found ourselves in a rapidly developing culture in which, as the journalist Hardeep Mathuru notes, not only do we know that our politicians are shamelessly lying, but we also know that they know we know they’re lying. In connection with this, in a piece back in April 2020 Mathuru wrote:

This little mise en scène we’re all in is very dangerous. Never more so than now.

In his 2005 book on the last generation of the Soviet Union, anthropology professor Alexei Yurchak argued that everyone knew the Soviet system was failing, but no one could imagine an alternative to it, so ordinary people entered into a play with those in power, to maintain a pretence of a normal society. Everyone knew it wasn’t real, but it was accepted as so. The society, Yurchak argued, was in a state of “hypernormalisation”; a fake reality.

Not surprisingly, the COVID-19 pandemic and Brexit has only helped to accelerate its development here in the UK, a country that is clearly beginning to fail, politically, economically and socially. However, despite trying to alert people to this process of hypernormalisation a number of times in my own public work since 2018 (see for example HERE and HERE and HERE), I remain deeply disturbed by how few people I talk with, even within what are called progressive/liberal circles, realise it’s underway.

I still know of no better or more accessible introduction to the process than that found in Adam Curtis’ recent BBC documentary called “HyperNormalization”. Please, if you haven’t seen it, do watch it. Of course, this documentary is not the final or definitive word on the subject but it is an important word and, as such, it needs to be heard and talked about more widely.

A key figure in the development of hypernormalisation is the shadowy but hugely influential Russian politician and businessman Vladislav Yuryevich Surkov (b. 1964) who has also been a personal advisor to Vladimir Putin. Here’s how Adam Curtis introduces Surkov to us in his film: 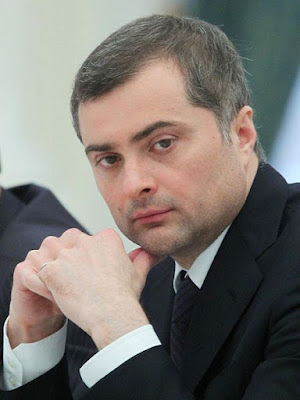 Surkov is one of President Putin’s advisers, and has helped him maintain his power for 15 years, but he has done it in a very new way. He came originally from the avant-garde art world, and those who have studied his career, say that what Surkov has done, is to import ideas from conceptual art into the very heart of politics. His aim is to undermine peoples’ perceptions of the world, so they never know what is really happening. Surkov turned Russian politics into a bewildering, constantly changing piece of theatre. He sponsored all kinds of groups, from neo-Nazi skinheads to liberal human rights groups. He even backed parties that were opposed to President Putin. But the key thing was, that Surkov then let it be known that this was what he was doing, which meant that no one was sure what was real or fake. As one journalist put it: “It is a strategy of power that keeps any opposition constantly confused.” A ceaseless shape-shifting that is unstoppable because it is undefinable. It is exactly what Surkov is alleged to have done in the Ukraine this year. In typical fashion, as the war began, Surkov published a short story about something he called non-linear war. A war where you never know what the enemy are really up to, or even who they are. The underlying aim, Surkov says, is not to win the war, but to use the conflict to create a constant state of destabilized perception, in order to manage and control.
[The full documentary can still be found on the BBC iPlayer at this link]As Peter Pomerantsev writing for “The Atlantic” in 2014 put it: The brilliance of this new type of authoritarianism is that instead of simply oppressing opposition, as had been the case with 20th-century strains, it climbs inside all ideologies and movements, exploiting and rendering them absurd. One moment Surkov would fund civic forums and human-rights NGOs, the next he would quietly support nationalist movements that accuse the NGOs of being tools of the West. With a flourish he sponsored lavish arts festivals for the most provocative modern artists in Moscow, then supported Orthodox fundamentalists, dressed all in black and carrying crosses, who in turn attacked the modern-art exhibitions. The Kremlin’s idea is to own all forms of political discourse, to not let any independent movements develop outside of its walls. Its Moscow can feel like an oligarchy in the morning and a democracy in the afternoon, a monarchy for dinner and a totalitarian state by bedtime. The present, developing situation here in the UK should serve to remind us that we must not, for one single moment, allow ourselves to be seduced into thinking this is simply an isolated Russian phenomenon. The truth is that increasing numbers of our own British politicians and newspapers (the Daily Mail and the Daily Telegraph being key examples) are now daily applying Surkov’s methods. The result is that truth, the central pillar of all genuinely democratic traditions, is in danger of disappearing completely from our lives and, if we are not careful we will soon find ourselves in a world where the ideas of truth which once shaped our lives are simply no longer livable.
Let’s be absolutely clear about this. Our current UK government’s aim is precisely to undermine our perceptions of the world, so we never know what is really happening and, just as Surkov turned Russian politics into a bewildering, constantly changing piece of theatre, Johnson et. al. are changing our own politics into a bewildering, constantly changing piece of theatre. As we watch this disturbing performance unfold, we are beginning to find out that Johnson’s 10 Downing Street, just like Surkov’s Moscow, can feel like an oligarchy in the morning and a democracy in the afternoon, a monarchy for dinner and a totalitarian state by bedtime.
POSTSCRIPT 27th May 2021
following Dominic Cumming’s appearance before the Covid select committee evidence
Ian Dunt, in a piece for the inews website, has written a piece called “Dominic Cummings’s Covid select committee evidence was a story of liars – told by a liar”. It concludes with the following two paragraphs which, given what I wrote above, seem worth adding here:
In the end, Cummings looked like the loneliest man in the world. Suddenly, he was the one relying on the notions of truthfulness and integrity. He needed MPs to believe him. And not just that, he needed to operate in a political system in which it mattered that Hancock had lied, or that Johnson was misleading the Commons, or that the government was currently denying that it pursued a herd immunity strategy which it had itself briefed to the press in March 2020.
But those no longer mattered, because of the very culture Cummings had helped create. He had worked to undermine the operational role of truthfulness in political discourse. And now, when he most needed it, it was nowhere to be found.
Email Post
Labels: Boris Johnson Brexit COVID-19 Hardeep Mathuru hypernormalisation UK Government Vladislav Surkov
Andrew James Brown
My name is Andrew James Brown. I’m a philosophically/theologically inclined writer with sympathies towards Shin’ichirō Imaoka’s understanding of free religion (自由宗教), Christian atheism, D. G. Leahy’s “thinking now occurring for the first time”, a Lucretian inspired religious naturalism, new materialism and Kyoto School philosophy; also a photographer, cyclist, walker and jazz bass player. In addition to this, I’m the minister of a small, liberal, free religious community in Cambridge (UK)