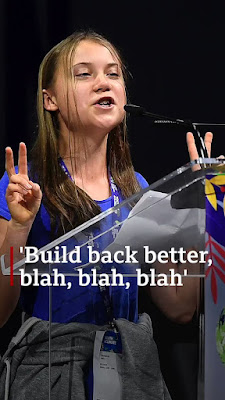 Today (Sunday, 31st October) is All Hallows Eve, Halloween, when many folk traditions suggest that the souls of the dead are to be found walking amongst us. It is also the first day of the 26th Conference of the Parties (COP) to the United Nations Framework Convention on Climate Change.

Are the two connected?

Well, we all know that the language used at present by our political decision-makers to talk of how they/we are going to respond to the climate emergency is a dead one. It is a language clearly empty of truth, empty of life. It is a “blah, blah, blah” language of the dead or the soon to be dead — as Greta Thunberg has so powerfully observed.

Over the next fortnight, we will hear this dead language repeatedly spoken by people holding views and promoting policies who are, in a very real way, spectres haunting our dying world.

But what do I mean by this?

Well, much of the COP26 meeting will stand as an emblem for our modern world in which so many of our political, economic, financial institutions, policies and ideologies are essentially dead even though countless millions continue to pretend that they are not and to treat them as if they were still alive.

My simple question today is what would happen were we to accept this and frankly acknowledge that we are in the presence of spectres and ghosts?

We might, perhaps, revive the compassionate Halloween tradition of lighting a candle and praying for all the souls of the dead, even the souls of the living dead who will address us this week.

But it is not only those who will be speaking at the COP26 meetings who are dead. We, too — intimately bound up as we are in the problematic ways of living that are represented by the institutions, policies and ideologies I have just mentioned — we, too, are also dead in some fashion. Yes, we must pray for our so-called “leaders” speaking at the COP26 meetings but we must also pray for ourselves.

But will prayer affect any real change? Well, as I say each week in this service, “[a]lthough we may often doubt that our prayers can change anything, let us never forget that prayer changes people and people change things.” The expressed hope is, you will recall, that our prayers “so change us that we can become the hands of holy creativity, love and justice in this, our most beautiful, but often bruised and hurting world.”

My point today is that, although we may already be spectres, prayer can help to change us into those special kinds of ghosts who have learned to accept our ghostliness, because we realise, together with the Italian philosopher Giorgio Agamben, that “spectrality is a form of life; a posthumous or complementary life that begins only when everything is finished. Spectrality has, with respect to life, the incomparable grace and astuteness of that which has been completed, the courtesy and precision of those who no longer have anything ahead of them” (quoted in  David Kishik, “The Power of Life”, Stanford University Press, 2012, pp. 13–14).

So, let us admit our old way of being no longer has anything ahead of it and that it must die, that it is finished. And then let us embrace ourselves as ghosts working in the ruins for the sake of a new kind of life to come.

In the end, this seems to me simply to be another way of expressing a piece of ancient, universal wisdom found in John’s Gospel where Jesus says to us: “Amen, amen, I tell you, unless the grain of wheat falling to the ground dies, it remains alone; but if it die it bears plenteous fruit (John 12:24, trans. David Bentley Hart).