Welcome to Lucy, Desi and Daniel? A Response to a question by Daniel C. Dennett

A sermon delivered at the Memorial Church, Emmanuel Road on 25 November 2007

Mystery is declared to surround the various conceptions of God, but there is nothing mysterious about the process of transformation, which is clear for all to see and has been described (and often decried) by generations of would-be stewards of this important idea. Why don't the stewards just coin new terms for the revised conceptions and let go of the traditional terms along with the discarded conceptions? After all, we don't persist in the outmoded medical terminology of humors and apoplexy or insist on finding something in contemporary physics or chemistry to identify as phlogiston. Nobody has proposed that we have discovered the identity of élan vital (the secret ingredient that distinguishes living things from mere matter); it's DNA (the vitalists just didn't have the right conception of it, but they knew there had to be something). Why do people insist on calling the Higher Power they believe in "God"? The answer is clear: the believers in the belief in God have appreciated that the continuity of professing requires continuity of nomenclature, that brand loyalty is a feature so valuable that it would be foolish to tamper with it. So, whatever other reforms you may want to institute, don't try to replace the word "God" ("Jehovah," "Theos," "Deus," "the Almighty," "Our Lord," "Allah") when you tinker with your religion. In the beginning was the Word.
I have to say that it has worked pretty well, after a fashion. For a thousand years, roughly, we've entertained a throng of variously deanthropomorphized, intellectualized concepts of God, all more or less peacefully coexisting in the minds of "believers." Since everybody calls his or her version "God," there is something "we can all agree about"—we all believe in God; we're not atheists! But of course it doesn't work that well. If Lucy believes that Rock (Hudson) is to die for, and Desi believes that Rock (music) is to die for, they really don't agree on anything, do they?

[An] eminent Episcopal cleric once confided to me that when he found out what some Mormons believed when they said they believed in God, he rather wished they didn't believe in God! Why won't he say this from the pulpit? Because he doesn't want to let down the side. -o0o-

One of the puzzling things about Dennett's call is that we are in fact living through a time when many religious groups are doing precisely what he calls for and doing it for wholly unhealthy reasons. As I am sure many of you are aware, increasing numbers of conservative religionists, of all persuasions, are now defining very tightly what it is that they mean when they talk of God. I can take you to three churches within five minutes walking distance from here where you will be told in no uncertain terms what it is they believe about God - and, by extension what it is you should believe. It will come as no surprise to discover that I also know some Muslims whose definition of God is also becoming increasingly clearly defined. Although I still wish to remain on as good as terms as I can with all of them, I have to say that I find their understanding of God to be extremely bitter, dark, repressive, narrow and judgemental. I would like to be able to say that the ultimate religious sanction, namely violence and even murder, is not on their agenda (and for most it isn't) but, as we know, a recent terrorist bomb plot did, alas, have some roots here. Given time and, if not encouragement then at least the opportunity and space, I becoming increasingly concerned about how religion may be developing in the British context.

Given all this Dennett's call must be addressed primarily to the liberal churches and religious groups of all faiths and its ministers - which includes us. I think he is right to make this call and it is becoming increasingly important in this age of conservative radicalisation to say publicly that we do not believe in the kind of God that can underpin any kind of extreme fundamentalist religion of whatever stripe. We are beginning to bump up against the very inconvenient truth that, as much as we may like to keep up the appearance of there being a genuine consensus amongst all religious groups - let alone just amongst Christians - it is no longer either realistic to do this nor, today, even safe. In fact not to break ranks and to take the risk of "letting the side down" would be, I think, a culpable failure on our part.

But this inconvenient truth reveals a whole load of other complex issues because once you have started taking such a stand and challenging conservative readings over in what consists being a faithful and honest disciple of the man Jesus of Nazareth it then seems to be insufficient not to go on and be a little more explicit about what it is we do believe about God. But, in important ways, this kind of clarification can run counter to how we have been developing over the last few centuries, namely towards orthopraxy (right practice) rather than orthodoxy (right belief). We felt, for what were good reasons, that what counted was what we did and not, primarily, what we believed. But one down side of this is that, slowly and surely, and especially at the liberal end of things, we have become increasingly disconnected from the important motor of belief which gave us our initial energy, vision and direction.

Here is a story told to me by someone in education research in Cambridge which helpfully illustrates my point. A crew and passengers board a fine large sailing boat with the intention of finding new wondrous lands to settle and to live in freedom. They set off with pass 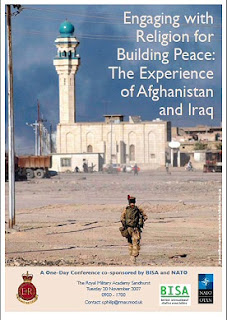 ion for the search and for years this passion animates them as they seek the promised land. But, as the years pass by and they do not find their dreamed of port they begin to sail differently for the true purpose of their life has changed. Where once they coiled ropes, raised sails, cleaned decks and polished brass to get the ship to its final port now they simply coil ropes, raise sails, clean decks and polish brass. It looks like they are sailing with purpose but they are not. They are simply sailing. Expand this story by a few generations and you will get to where we are today.
If this process had been mirrored across the board and had affected all forms of religious beliefs then the situation would be different but we know this is not the case. It is clear that conservative religion is on the rise again and with it increased religious commitment and belief.
The conference I chaired and spoke at this week at the Royal Military Academy Sandhurst was yet another frightening wake up call on this matter.

Now I'm very much a theologian and philosopher and so naturally my default position is to think hard about this stuff and try to present rational arguments for the truth of my own position and that of Unitarian and Free Christianity. I think this can be done, and done well, but I am increasingly realising that to do this would be to play a similar game to the conservative religionists. I could very easily try to tighten up the detail of what it is we believe but we, too, would quickly become a theologically narrow community; a veritable parody of the liberalism and openness we currently espouse.

It seems to me that the great intuition of the Rabbi Jesus of Nazareth - in whose footsteps we seek to follow - was that the kingdom of Heaven is not in the fiefdom of any synagogue or church nor even a single religion. Jesus realised that the kingdom of Heaven is God's and God's alone and it has always included the whole of creation with all its different peoples and beliefs. The great Unitarian minister Robert Travers Herford said in 1929 the problem was that the Church decided to preach:

"Jesus and the resurrection"; they did not preach what [Jesus] preached. And what gradually came into being, as the result of their labours, was the Christian Church; it was not the Kingdom of God - the Christian Church, as a society of those who "believed on their Lord Jesus Christ," and interpreted their belief, as time went on, in terms of doctrinal propositions about him rather than in efforts themselves to do the things that he said (The Idea of the Kingdom of God 1929, p. 1).

Reflecting upon this failure of the Christian Church Herford boldly went on to state in the same lecture that:

Now, although the practical religion we practise here is wholly shaped by following Jesus example and teachings and, therefore, certain Christian traditions and forms of worship and prayer and is, in this sense 'Christian,’ because we are prepared at the same time to state explicitly that any individual who realises their true relationship to God also experiences the kingdom of God as a present reality we reveal that we believe, in principle and in practice, that any faithful person in any religious tradition can and does manifest the kingdom of God in their own lands and societies and in their own hearts. In the most general sense - albeit very strongly - we believe in a God, an ultimate unity, that holds all things and peoples together.

How such an ultimate unity may be doctrinally expressed is actually manifold. It can be expressed by my own form of Spinozism, it can be expressed through all kinds of 'orthodox' Unitarian and Trinitarian theologies, it can even be expressed by atheistic philosophies; J. M. E. McTaggert's philosophy is one such beautiful and inspiring example. It can be expressed by Buddhists, Jews, Muslims and Brahmins and many more. This is our great heresy and God, understood as such an underlying unity, is that in which we believe and we seek to make this unity visible in our world by following Jesus of Nazareth and seeking what St Paul memorably called the "Mind of Christ" (I Cor. 2:16).

As the writer of I John said: "Little children, let us love, not in word or speech, but in truth and action" (3:18). Our call is, therefore, not to tighten up our words and speech - that is to say our doctrine - but simply to show truth and action by our public commitment to a Divine Unity who includes in love beyond our understanding of love not only ourselves but all, including Lucy, Desi and even Dennett and all sectarian conservatives. Now that is, surely, a Gospel worth taking abroad and proclaiming to all those who would take our world down the narrow path of exclusion, violence and destruction.

Does this let the side down? Well, if the side is orthodox Christianity (or pretty much any orthodox expression of every religion I know) then the answer is a resounding "Yes!." But I'm prepared to go to my grave arguing that it doesn't let down Jesus of Nazareth nor his inclusive vision of the kingdom of God. In the end that's all I care about and, I would argue, all that any of us should care about.