Consider the ravens and the lilies . . . Dispensing with providential conceptions of God 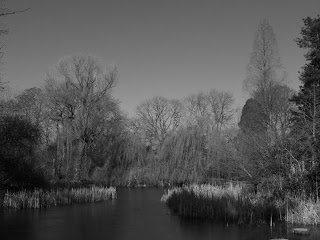 Here I'm going to tie together a few loose ends from a couple of earlier blogs. This tidying up has been occasioned by one of the profoundly worrying implications of the Archbishop of Canterbury's speech and his "World at One" interview of last week.

I refer to the fact that he seems to be inviting into the public civil sphere religious beliefs that do not, in fact cannot, acknowledge that it is possible to lead a good, civil and ethical life without any reference to God or religion. To recap, very briefly, remember at one point he stressed , "nobody in their right mind would want to see in this country the kind of inhumanity that's sometimes been associated with the practice of the law in some Islamic states; the extreme punishments, the attitudes to women as well."

This turn of phrase suggests that he believes there already exists a shared set of moral criteria amongst people who are in their "right minds" which can be brought to bear on Shariah Law in order to decide what parts of it could, or could not, be accepted by other reasonable comprehensive doctrines - such as one held by, say, an atheist.

So, hiding in the Archbishop of Canterbury's words, is something orthodox religion finds very disturbing indeed. We may believe in God and have religious beliefs but they are in no sense necessary for the creation of a just and civil society.

Alas, orthodox theism cannot by its own logic admit such a thing. For orthodox theism believes that God has spoken definitively to human kind through various texts, infallible prophets, divine messengers or, in the case of Christianity, by himself in human form. We only know how to behave morally and ethically because God has intervened providentially in human affairs to let us know. "He" is believed to offer rewards to those who follow his "revealed" laws and to punish those who do not. He does this through interventions in nature (thereby, rather ironically, breaking his own natural laws - naughty!) or through human representatives and institutions who dispense religious justice.

Now, as I have noted on many occasions, I simply don't believe in such a God any more. Rather I believe in a God who is also Nature, something expressed well by my friend and teacher Victor Nuovo. It is a God who is

. . . impersonal and inexhaustibly productive; it is being itself generating itself in an infinite variety of ways. The natural world is everywhere an expression of intelligence, which is a divine attribute, and rational beings, like you and I, when nature’s gift of curiosity awakens in us, discover in nature manifold wonders that cause us to regard it as something properly to be called divine.

Such a God simply doesn't intervene providentially and certainly doesn't (in fact cannot) break Nature's laws because God is Nature. To break Nature's laws would be to strike at the heart of God's own Being. Importantly morality comes to be understood as being an emergent quality of the Natural world and we may consider it one of her most extraordinary and beautiful fruits. A person who holds the view I have comes to understand that, whatever they thought in the past, as an intimate part of Nature, they help shape and develop the law as new insights are had and as contingent circumstances dictate. As parliamentary democracy has arisen amongst us the process is now undertaken by all of us through our elected representatives.

In such a theology God is understood as being present in our law making and moral life but it is the ever-present and sustaining Spirit of Life itself and not as moral law giver, providential judge and consequent personal dispenser of justice.

But we have a problem which in the present situation I think we really do have a duty to address head-on. It arises from the fact that we still use the word God in our worship and that what we mean by it is not what is meant by orthodox theism.

Back in November I read from an interesting book by the philosopher Daniel Dennett called "Breaking the Spell - Religion as a Natural Phenomenon" (Allen Lane, London 2006 pp. 208-210). The following point deserves a repeat performance:

Mystery is declared to surround the various conceptions of God, but there is nothing mysterious about the process of transformation, which is clear for all to see and has been described (and often decried) by generations of would-be stewards of this important idea. Why don't the stewards just coin new terms for the revised conceptions and let go of the traditional terms along with the discarded conceptions? After all, we don't persist in the outmoded medical terminology of humors and or insist on finding something in contemporary physics or chemistry to identify as . Nobody has proposed that we have discovered the identity of élan vital (the secret ingredient that distinguishes living things from mere matter); it's DNA (the vitalists just didn't have the right conception of it, but they knew there had to be something). Why do people insist on calling the Higher Power they believe in "God"? The answer is clear: the believers in the belief in God have appreciated that the continuity of sing requires continuity of nomenclature, that loyalty is a feature so valuable that it would be foolish to tamper with it. So, whatever other reforms you may want to institute, don't try to replace the "God" ("Jehovah," "Theos," "Deus," "the Almighty," "Our Lord," "Allah") when you tinker with your religion.

In the beginning was the Word. I have to say that it has worked pretty well, after a fashion. For a thousand years, roughly, we've entertained a throng of variously deanthropomorphized, intellectualized concepts of God, all more or less peacefully coexisting in the minds of "believers." Since everybody calls his or her version "God," there is something "we can all agree about" - we all believe in God; we're not atheists! But of course it doesn't work that well. If Lucy believes that Rock (Hudson) is to die for, and Desi believes that Rock (music) is to die for, they really don't agree on anything, do they?

[An] eminent Episcopal cleric once confided to me that when he found out what some Mormons believed when they said they believed in God, he rather wished they didn't believe in God! Why won't he say this from the pulpit? Because he doesn't want to let down the side.

I'm slowly coming to the opinion that one of our most pressing duties is to begin to let the side down - by which I mean let down the side of orthodox theism - and that we must move, to use a parliamentary analogy, elsewhere in the chamber, Not to the opposition benches mind - the atheist camp - but to a more honest independent position where we can speak more clearly about how we think a certain kind of belief in God can healthily and creatively inform the secular public civil sphere.

I think we do have to begin to speak up about the threat from militant theistic religions which refuse to acknowledge that humanity makes and develops its moral laws and that proper science best reveals natural laws.

We also need to speak up against militant atheism which seeks to exclude any realm of human experience that is not covered by a narrow materialistic and reductionist understanding of the scientific endeavour.

I acknowledge that this is a difficult middle way to walk but we must do it if it truly seems to us more true and reasonable than other ways. I also acknowledge that what I am saying may be, to some, a little unsettling but we are in a time of really extraordinary change and we have to acknowledge that we, too, will be changed. For example we have to be absolutely clear we are using language metaphorically and figuratively as we still do in some of our prayers - notably the Lord's Prayer. We must not mislead.

Yet, for all my unsettling suggestions, something does remain relatively secure, namely the basic and exemplary model of life we inherit from the man Jesus.

It is worth recalling to mind his strikingly simple and powerful request that his followers should:

Consider the ravens: they neither sow nor reap, they have neither storehouse nor barn, and yet God feeds them. Of how much more value are you than the birds! And which of you by being anxious can add a cubit to his span of life? If then you are not able to do as small a thing as that, why are you anxious about the rest? Consider the lilies, how they grow; they neither toil nor spin; yet I tell you, even Solomon in all his glory was not arrayed like one of these. (Luke 12:24-27).

It is vital to note that Jesus did not say consider God or even religion. It is clear he believed if his followers observed the world as it was and with a truly reflective and inquiring spirit it was possible to draw certain true conclusions about God and Nature and, on the basis of that knowledge, to live better lives. Better, not just in terms of knowledge, but in terms of lives that were increasingly moral and just.

I'm not going to unfold it now but I think it can be shown that our understanding and development of in what consists the moral life flows from such observations. Not in any simple way, mind you, for we learn as much from a critical engagement with the distressing aspects of nature as we do from the obviously cosy and comfortable aspects. My basic point is that our moral law emerges from our experience of and place in Nature, it is not given from on high and recorded in infallible texts and doctrines.

I venture to suggest that our religious practice needs to move boldly away from understanding God as providential and personal and increasingly come to focus on the contemplation of Deus sive Natura - God as Nature and Nature as God. A contemplation that is both spiritual and scientific and which can be summed up as as clarion call to acknowledge the wonder of Nature. I share with John Ray (1627-1705), the seventeenth-century naturalist the belief that there is for a free human being "no occupation more worthy and delightful than to contemplate the bounteous works of nature and honour the infinite wisdom and goodness of God" (from the Preface to Catalogus Planta circa Cantabrigiam nascentium 1600). In other words - consider the ravens and the lilies . . .

C'est suffit. Let's our religion be no more nor any less than this and in our engagements with the public civic sphere may we begin to play a strong but gentle role in keeping dangerous providential conceptions of God as far away from our civic legal processes as is possible.