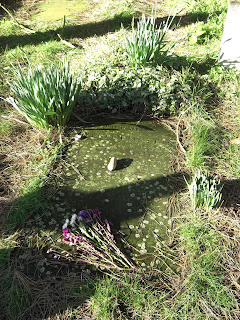 Every now and then it is worth going back to first principles as a reminder of what's going on here. I'm going to do this in two ways today. The first is to offer a reminder in a few short paragraphs the very simple underlying message I consistently preach each week. The second is to show why I don't then just stick to this simple message itself and so avoid getting on occasions somewhat more specific and complex.

So to the first matter. I try to the best of my ability to be an honest follower of our forebears in presenting "Christianity in its most simple and intelligible form." Over the past few years I have realised that this statement needs a slight modification because there are clearly a number of good and legitimate ways this might be done; so really my strap-line these days reads "Christianity in one of its most simple and intelligible forms" - as many of you know this is hung round the attempt to try and follow Jesus' teachings rather than the incredibly complex hierarchical institutional religion that sprung up around him.

I will start by quoting James Luther Adams, the great Unitarian Christian theologian of the late twentieth century who summed up the ideal by saying:

The liberal Christian outlook is directed to a Power that is living, that is active in a love seeking concrete manifestation, and that finds decisive response in the living posture and gesture of Jesus of Nazareth (Neither mere morality nor mere God in An Examined Faith p. 307).

The "power" that is living is, of course, called amongst us "God" but importantly, as the name "Unitarian" suggests, it is a God who is understood as being somehow One. Remember this is not merely some abstract and speculative theological notion but one which has very real practical ramifications relating to how we then go on to understand our ethical and ecological responsibilities. As Cliff Reed wrote in an essay "Affirming Oneness - The Unitarian Basis":

. . . the God of whom we say, 'God is One’, is the heart, soul, spirit, process and nature of the universe itself, manifest in all Creation and not least in human love and personality. . . . [and] because God is One, Creation is one. Because Creation is one, humanity is one. Because humanity is one, my neighbour and I are one. And, indeed, each of us is one integrated whole participating in one infinitely greater yet still integrated whole.

Now this is affirmed for two reasons. The first is wholly intuitive and, likely as not, the people who come and stay here are going to be those who truly FEEL this Divine Unity to be the "really-real" with all their heart, soul and mind. They will be those for whom the universe as a whole evokes wonder and awe and they will probably resonate strongly with the words of the eighteenth century physician and universalist George de Benneville (1703-1793) that, "The inner spirit makes us feel that behind every appearance of diversity, there is an interdependent unity of all things."

The second reason our tradition affirms this Divine Unity is because it seems to have been Jesus' basic religious insight. We take this insight as normative because, as J. L. Adams said, Jesus' living posture and gestures are for our community the decisive response to God's desire to be made lovingly and concretely real in our world. [Editorial note added 6th March 2007 - Sloppy use of the word "desire" by me here. God, not being personal, really doesn't desire anything. What I am really refering to is something necessary about God or Nature such as - and see blog above on "Mother Love All the Way Down" - mothering amongst sentient creatures. This is all connected with Spinoza's idea of the "conatus" - the striving to persevere in being.] There are others, of course - we would not want to deny that - but for us the decisive response is seen in Jesus. His basic insight expressed most beautifully by the author of John's Gospel (17:20-23) where Jesus prays:

In passing I flag up strongly the fact that this belief in God, the Divine Unity is, as I have said, born out of love, wonder, awe and respect for the whole universe as it is. In consequence I get more than irritated when contemporary atheists, such as Michel Onfray, say that the religious impulse "stems from fear, misgiving, unease, inability to look death in the face, the feeling that something is lacking and distress that human life is finite: the primary components of angst" (in The Case Against Atheism) Hmmm - not true Monsieur Onfray, not true.

Anyway, as we try to live out of this wonder and belief we also publicly proclaim a love of truth - in fact this love of truth is our ONLY orthodoxy. The theologian John MacQuarrie (not a Unitarian himself) reminds us that this means our understanding of religion must be a reasonable one; one that involves no "sacrificium intellectus, no flagrant contradictions, no violation of natural reason, no conflict with what we believe about the world on scientific or common-sense grounds" [Twentieth Century Religious Thought, London 1989 SCM, p. 449].

All of the above explains why our own local church's covenant is "in the love of truth and in the spirit of Jesus we unite for the worship of God and the service of humankind."

And that's it. This essential position will not change unless our love of truth really reveals to us that this basic faith position is, in fact, wholly unfounded.

But, to use a turn of phrase borrowed from Wittgenstein, the truth of a religious position can really only be shown and not said. Although I am going to continue "saying" things below I hope they help show something . . .

I can now begin to move to my second point today which is to show why I don't then just stick to this simple message itself and so avoid getting, on occasions, somewhat more specific and complex.

The first thing to note is that like most religious liberals, what I am doing here is seeking to help those who come live a simple faith - one that we might call "essential." But, alas, the moment such a simple, essential Christianity connects with the real contingent world phenomenal complexity ensues. Just think about it; what love of God and love of neighbour actually means when we are with our families and friends is going to be radically different from what it looks like when we encounter a homeless person on our streets, a violent drunk or drug addict, a crazed religious fundamentalist or a brutal dictatorship. The plain fact of the matter is, as the insightful writer of the comic "American Splendor", Harvey Pekar, noted: "Ordinary life is pretty complex stuff."

This inconvenient truth is what makes many liberals - especially religious liberals - more than a little frightened of the particular, the point where, so to speak, the rubber hits the road. This is known in the trade as the "scandal of the particular." When our ideal religion connects with the real world we quickly discover that we nearly always need to get a lot more specific and detailed. Let me illustrate this with a story I have myself only just heard. It is told by an episcopal priest from Alabama, the Revd James Creasy:

It seems there was a small town preacher in the Pacific NW who had to confront a particular unethical practice in his community. If you recall, the principle industry of the Pacific NW was for many years Logging; and that is how most of his parishioners earned a living. You may not know, though, how the operation was carried out in the early years of this century when our story takes place. Trees would be cut dawn, placed in a river, and allowed to drift to the sawmill downstream. Now there wasn't much supervision of the logs as they travelled down the river, so the way loggers kept up with their logs was to brand them on the end with their own personal mark. This way when a log arrived at the sawmill their account could be credited accordingly.

Now it came to our preacher's attention that some of his parishioners had discovered an easy way to increase their profits. Some loggers would drag logs out of the river somewhere between the logging site and the sawmill, saw the brand off the log and, then put their own brand on the log. When our preacher friend got wind of this practice he felt compelled to address it in a sermon. He decided the best approach would be to remind folks of the Ten Commandments. After the sermon, on the way out of church, everyone told him what a fine sermon it was, that he truly was inspired. Well this pleased him to no end, but as the weeks passed he discovered that the practice of cutting off the ends of the logs was continuing. He realized that he hadn't been specific enough in his sermon, so he decided to be more direct. The following Sunday he chose as his text the eighth commandment, "You shall not steal."

Again the congregation reacted favourably to his fine sermon, and they told him so on the way out of church. But again no one took what he said very seriously, and the theft of the logs continued. So realized he was going to have to stop beating around the bush and call a spade a spade. The resulting sermon was entitled "Thou shalt not cut off the end of thy neighbours log."

Not long after that our the preacher found himself looking for another job.

Because just exactly how the basic teachings of Jesus, and the norms and values we then derive from them, are to be played out in the real world is never absolutely clear it can be damnably hard and challenging to figure out how to live and respond. And that my friends is why, more than occasionally, I say things that are, shall we say, a little more complex and which, perhaps, induce puzzlement or even discomfort - though I also hope they, occasionally, help clarify things too.

In the light of the complexity of the real world I return to my opening point and say this is why I think a very stripped down and very simple version of Christianity remains in order. Given that things are going to get pretty complex anyway one might as well start things off simply and insist in the first place only on following a simple religion whose outlook "is directed to a Power that is living, that is active in a love seeking concrete manifestation, and that finds decisive response in the living posture and gesture of Jesus of Nazareth."
Email Post
Andrew James Brown
My name is Andrew James Brown. I’m a philosophically/theologically inclined writer with sympathies towards Christian atheism, D. G. Leahy’s “thinking now occurring for the first time”, a Lucretian inspired religious naturalism, new materialism and Kyoto School philosophy; also a photographer, cyclist, walker and jazz bass player. In addition to this, I’m the minister of a small, liberal-religious, free-thinking community in Cambridge (UK)