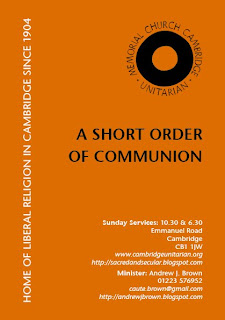 A couple of my earlier posts have begun to explore a way of philosophical and theological repentance (Zangedo) presented by the Japanese philosopher Tanabe Hajime - a major philosopher of the Kyoto School. The Kyoto School is a group of 20th century Japanese philosophers who developed original systems of thought by creatively drawing on the intellectual and spiritual traditions of East Asia, those of Mahâyâna Buddhism in particular, as well as on the methods and content of Western philosophy.

You can find them here and here.

As part of that inter-religious encounter on Christmas Eve, as usual, we will be having a short service of communion at the Cambridge Church at 6.30. The themes of a communion service resonate naturally with Tanabe Hajime's philosophy of Zangedo. The service also takes a major part of its inspiration from a service developed by the Universalist group of ministers called the Humiliati formed during late 1940's. Anyway, over the past few weeks I have been preparing a service which makes these resonances more explicit. For those minded to take or look (or even use it themselves) go to the following links for pdf copies of both the COMMUNION SERVICE and the outline ORDER OF SERVICE.

A Happy Christmas to you all.