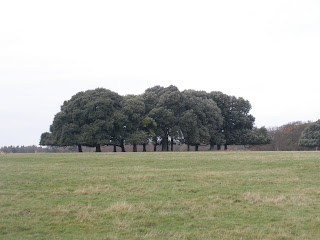 My text for this Sunday was such a mess of corrections that as I sit down to revise and then post it I realize I simply don't have time to tidy it up so I'll cut straight to the chase - in so far as what follows is anything so clear cut . . .
The immediate context of the service was Holocaust Memorial Day in which we remember an event which has radically shaped us all our self-understandings but, more than any other group, that of the Jewish people.  To this end I told a story about something I often notice when teaching theology in the Jewish/Christian context.  What that was in detail need not be rehearsed here but it brought to the fore the fact that at the conservative end of the religious spectrum (for good and ill and both Jewish and Christian) people act because their faith is something that comes to them "as an inevitable knowledge" with the "force of a revelation", as a "fact that splits [them] like a scimitar."
I, as a modern skeptical liberal (or, to use Diarmaid MacCulloch's felicitous phrase, "a critical friend of Christianity"), simply cannot share this faith with them because, for many complex reasons, that religious story simply doesn't come across to me in this fashion. In fact, for the most part, most of it strikes me as utterly implausible.
However, the Judaeo/Christian story (and many of its practices) still carries for me (and possibly for many of you) a residual charge enabling me, on occasions, tantalizingly to sense something of the power it might formally have had. But, for all this, I have to be honest and say I don't think that, for people like me, it can be recharged as it stands and become again "as an inevitable knowledge" coming with the "force of a revelation", as a "fact that splits [me] like a scimitar."
So the pressing need for someone like me (especially since I have a leadership role in a church) is to ascertain what does in fact come to me (and, therefore, perhaps to you) in this fashion? At this point I cited some words from a book by James C. Edwards which I continue to find hugely helpful:

'Dewey was right: in our time the problem with supernatural religion is belief. However lovely and powerful the stories of the gods and their minions for us are, there's just no way that they are "required, as a necessity requires." To say that we can't really believe in them is just to say that we aren't now forced to; they are not any more for us "inevitable knowledge." There are plausible - more plausible - alternative accounts of the phenomena upon which the supernatural has based its claims on us: in the public square, or at least in the college quad, genes now compete with gods, and win. For us full Pathos [impressiveness], full belief, comes only with an intellectual or artistic inevitability. Having put myself to the question with all the scruple I can muster, it's only what I cannot help saying that seems genuinely true, and therefore capable of being believed and acted upon with a clean heart. That's what we admire (surely on the whole naively) as the achievement of natural science' (in The Plain Sense of Things: The Fate of Religion in an Age of Normal Nihilism by James C. Edwards, p. 231).

"Full belief, comes only with an intellectual or artistic inevitability." This strikes me as a hugely important point to ponder. The "intellectual inevitability" refers, of course, to the power the results (some assured, but many provisional) of the natural sciences have over me (us). They do persuade me in the powerful sense I explored above and can be believed and acted upon with a clean heart.
The "artistic inevitability" refers to those things that simply seem 'true' even after one has stripped away from them (and yourself) all supernatural beliefs and also, therefore, stopped doing old fashioned metaphysics. It refers to those poems, paintings, pieces of music and people that, the moment you hear or see them, come to you with the astonishing "force of a revelation" as "facts that split you like a scimitar" and which then become in your life "as an inevitable knowledge". I can also believe in their 'truth' and act upon them with a clean heart.
My list of things that fit into these two categories is very long and I won't rehearse them here (should you want to know my blog will give you many clues as to what they are).  To be sure in all this supernatural belief has definitively gone but left in its place is the kind of belief that does make sense to and empower someone like me who just can't believe in the old ways anymore.
That'll do for the moment - there's more. much. much more but I just can't figure out how to say it at the moment . . .
Email Post
Labels: inevitable knowledge James C. Edwards Liberal Christian liberal religion
Andrew James Brown
My name is Andrew James Brown. I’m a philosophically/theologically inclined writer with sympathies towards Shin’ichirō Imaoka’s understanding of free religion (自由宗教), Christian atheism, D. G. Leahy’s “thinking now occurring for the first time”, a Lucretian inspired religious naturalism, new materialism and Kyoto School philosophy; also a photographer, cyclist, walker and jazz bass player. In addition to this, I’m the minister of a small, liberal, free religious community in Cambridge (UK)

Yewtree said…
Oddly enough I have just posted on a similar subject, which is the question of why bother with the Christian mythos even when we don't literally believe it. I have talked about negative reasons, but actually there are many positive ones to retain it, or rather, a liberal interpretation of it.
31 January 2010 at 20:53

kbop said…
the mapping of our beliefs on to the physical world, using causal connections to try and grasp something allegedly outside the objective, especially when the objective still a constantly evolving framework, is a real problem and perhaps one that is not going to yield to any neat solution.