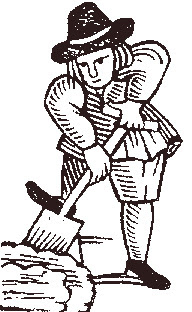 In my various roles as a chaplain this week I have been talking with people both about their real fears of redundancy as well as with a number who have been informed that their jobs are now to go. This is, of course, just the start of a very long process.

The economic situation that, it is claimed, necessitates these particular swathing cuts - though I firmly believe an underlying callous neoliberal ideology is really the major driving factor in the choice of where 'savings' are to be made - these cuts will push many hundreds of thousands of people in this country back into poverty and many others will find themselves increasingly stretched in financial terms as well as finding themselves without vital public services.

Though I think there are good and sound reasons why all of us, particularly in the West, need to understand that as a culture we have been snaffling far too much of the world's natural resources and been living way above anything like appropriate and sustainable levels of consumption, we mustn't loose sight of another ancient dynamic that is returning, namely, that caused by the growing gap between the unimaginably wealthy (and therefore powerful) and those who are much poorer, including those whom we can clearly call the poor.

The rhetorical claim may be being made by our present government (and governments across Europe) that "we're all in this together" but this is not true in the way they would like us to think it is because the plain fact of the matter is that the poorer people will take the greatest burden which, in its own insidious way, is in truth often an unconscious act of supporting the excessively wealthy. (Addition 8 August 2010 - See this article by John Harris in The Guardian with his take on this claim that "we're all in this together.")

Back in the 1910s the German philosopher Ernst Bloch was writing what became his book called "Traces" (you have already heard from it the story of the horse and the dog who were friends) - here is another of his stories which illustrates my point simply and starkly:

"What are you doing? I asked. I'm conserving light, said the poor woman. She sat in the dark kitchen, a long time already. That was certainly easier than conserving food. Since there isn't enough for everyone, the poor step in. They work for the rich even when they rest alone" (Traces p. 9).

In our culture the teaching about the poor we find in the Bible has all too easily been used, not to liberate them and to create a society concerned for the fullest possible flourishing of all, but instead to mollify - to offer people a solution that is more akin to an opiate than a goad to action which might lead to genuine social justice. Luke's teaching of "Blessed are the poor" or, as Matthew spiritualise it, "Blessed are the poor in spirit" for theirs is the "kingdom of God (or heaven)" has consistently been used to persuade the poor to remain quietly in their households in the dark, isolated one from another, and thinking that their sacrifice is good both for wider society and their own ultimate personal salvation.

In a way, of course, it doesn't help that Jesus said "the poor will always be with us." When you read the text closely and you inherit it within a tradition of radical social justice that is lived and embodied it is clear that Jesus wasn't justifying this situation at all - his concern for the poor and his actions for and on their behalf is clear - but as this line has been inherited it has consistently been used to implant in many minds the thought that poverty is simply a fact of life and so, whilst it should never be condoned, it sits there as mere fact as incontrovertible and uncontroversial as the wetness of water.

(NB, one public comment made immediately after I gave this address - something we encourage each week - pointed out that Jesus was concerned with a very wide understanding of in what consists poverty, i.e. it was not only the economic kind that concerned him. This is vitally important to note but today I wanted to remind us that economic injustice is included and it is all too easily forgotten.)

But Jesus protested, so have many radicals and, today, so do I.

Having said that, at an important level it *is* clear that "we are all in this together." Most of us, with more than an eye to the common good will, in our own ways, choose 'to sit quietly in the dark' in difficult times voluntarily taking less than we once did. I firmly believe that a lessening of our consumption coupled with a rediscovery of voluntary simplicity will aid our salvation, however you interpret that idea. I would go further and say that it is *essential*. These straightened and chastening times can be a great opportunity for a genuine spiritual and ethical renewal in which we rediscover our connectedness, not only with each other but with the whole natural world. At least, in part, this will help us fulfil in a contemporary way the promise Jesus made us that the poor will be blessed. But this only true *in part* because, as Bloch's little story reveals, we live in a culture in which there are those who not only *need* not share the burden of the hour but who *will* not. The bankers, big business leaders and many of our political leaders go on living lives 'bathed' in the brightest, most expensive and luxurious of lights, a light which is being paid for by the silent, suffering darkness of millions. If we just sit quietly alone in the dark without protesting the poor will, once again, merely be working for the rich.

The promise that the poor will inherit and be blessed will only be truly fulfilled when this silence is broken, when the light of the self-sacrificing darkness of the poor is removed from under the bushel and placed proudly upon the hill to serve as a beacon and rallying point to all who care for genuine justice and equity amongst all humankind.

My own great hero in this struggle as many of you know is Gerrard Winstanley (1609-1676) the leader of the radical movement known as the Diggers who felt that the earth and its fruits were a "Common Treasury" for all and who, in 1649 in protest at their poverty, began to live and dig upon the common land of George's Hill in Surrey. He memorably asked:

"Was the earth made to preserve a few covetous, proud men to live at ease, and for them to bag and barn up the treasures of the Earth from others, that these may beg or starve in a fruitful land; or was it made to preserve all her children?" (Gerrard Winstanley, The New Law of Righteousness, 1649)

The answer then was clearly "No!" and, although our age is not the same as the one Winstanley knew the answer is still "No!" The situation we find ourselves in after years of following a neoliberal agenda which has foisted upon us all a market driven approach to economic and social policy makes Winstanley's words resonate with us today in a remarkable way for do we not see those who have run and supported destructive big business capitalism continuing to live at ease and 'bathed' in a bright light by bagging and barning up what should be common fruits of all in obscene pay packages and bonuses?

The Diggers in their modest rebellion of setting up a community on George's Heath in April 1649 to till common land as a protest to this private bagging and barning of common riches was truly a light placed upon a hill and it can inspire us still. Winstanley also said this (and so pointed to how religion can often be a regressive rather than a progressive force) and with it I'll begin to draw to a close. He said: [Priests, i.e. one group of wealthy and powerful people many of whom enjoyed light at the expense of the poor beneath them, - Priests]:

"lay claim to heaven after they are dead, and yet they require their heaven in this world too, and grumble mightily against the people that will not give them a large temporal maintenance. And yet they tell the poor people that they must be content with their poverty, and they shall have their heaven hereafter. But why may we not have our heaven here (that is, a comfortable livelihood in the earth) and heaven hereafter too, as well as you? ... While men are gazing up to heaven, imagining after a happiness or fearing a hell after they are dead, their eyes are put out, that they not see what is their birthrights, and what is to be done by them here on earth while they are living" (Quoted in 'The World Turned Upside Down' by Christopher Hill, Pelican Books, London 1978, p. 141).

I think it is vital to heed Winstanley's words today and in our own times ensure that our eyes are not out by our present leaders so that we cannot see the birthrights of the vast majority of people on this earth, most of whom are economically poor. Even as we might all agree upon the need significantly to scale back on the excesses of our Western culture we do not need, at the same time, to agree or support political and financial agendas that are designed to keep a self-selected few in expensive light whilst the poor sit alone and in the dark.

Please protest with all your heart, mind, soul and strength - you are unlikely actually to dig upon George's Hill (or any other) but in this day and age there are many ways other ways to engage in the kind of protest movement that deserves the name of 'digging'.

My current energies are going into actively supporting the People's Charter and have just contributed a piece supporting it for the Country Standard. I recommend it to you. If you want to know more about the Cambridge People's Charter group contact me directly (email address at the top of this page). This may, of course not be your 'hill', but please don't let this stop you from finding another and digging it well . . .
Email Post
Labels: Country Standard Diggers Economic Downturn Ernst Bloch Gerrard Winstanley Gospels neoliberalism poor poverty The People's Charter the world turned upside down Traces voluntary simplicity
Andrew James Brown
My name is Andrew James Brown. I’m a philosophically/theologically inclined writer with sympathies towards Shin’ichirō Imaoka’s understanding of free religion (自由宗教), Christian atheism, D. G. Leahy’s “thinking now occurring for the first time”, a Lucretian inspired religious naturalism, new materialism and Kyoto School philosophy; also a photographer, cyclist, walker and jazz bass player. In addition to this, I’m the minister of a small, liberal, free religious community in Cambridge (UK)

Yewtree said…
Winstanley is one of my heroes too. There was an article about him recently in History Today.
19 July 2010 at 10:14