What was, must be tested - First Sunday in Advent 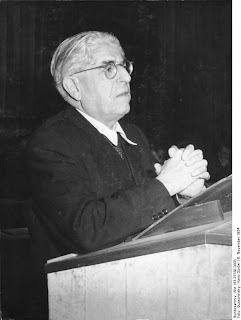 While [Jesus] yet talked to the people, behold, [his] mother and his brethren stood without, desiring to speak with him. Then one said unto him, Behold, thy mother and thy brethren stand without, desiring to speak with thee. But he answered and said unto him that told him, Who is my mother? and who are my brethren? And he stretched forth his hand toward his disciples, and said, Behold my mother and my brethren! For whosoever shall do the will of my Father which is in heaven, the same is my brother, and sister, and mother (Matthew 12:46-50).

One of the odd things that continues to strike me about Advent is the fact that the coming we are waiting for is behind us - i.e. it is something recounted in an ancient story. It would be remiss of me not to point out at the beginning of this address that in orthodox readings of Christianity (of course just because it bears the adjective ‘orthodox’ this doesn’t make it either right or true) this oddity is avoided by conjoining the waiting spoken of in the biblical text with a present waiting for a second-coming of Christ; it is claimed, therefore, that Advent speaks of waiting at both the beginning and end of history. However, if like me, the idea of a second-coming is simply not required of me as a necessity requires - I have to say that to me it looks, feels and I would say is, untrue - then I am left with the need to do something with the oddity and problem I have noted, namely, that the coming we are waiting for is behind us because, if it *is* all only a matter past waiting and history (in the simple sense that the Bible is very ancient) then there remains the need to as the pertinent question of why we keep returning to the Advent and Christmas stories and what might they usefully tell us about our present and our future possibilities? It seems to me that orthodox Christianity is right, in one important sense at least, which is Advent needs to speak to us about both the old waiting and our present waiting. Given that I - we? - can’t believe in the present waiting offered by Christianity, namely,  the second-coming of Christ, I think it is incumbent upon us to see if we can find a present waiting that *is* required of us as a necessity requires.

This thought brings me directly to the reading from Ernst Bloch’s remarkable book (one I would heartily recommend) ‘Atheism in Christianity’:

What was, must be tested. It does not hold good of itself, however familiar, for it lies behind us.  It holds  good only so far as the Where-to continues to live before us in the thing itself. If the link binding backwards is false, it must be cut. All the more so if it was never true, but simply a shackle.

It is telling, that even the loyal Ruth did not go back the way she came; she did not turn back, but followed the path of her own free choice. And on this point Jesus' goodness itself strikes off at a singularly sharp angle, away from tradition. How small is his sense of belonging, even though he is the son of an ancient house and family. He has passed beyond it, broken with its power; no remnant of it still stands over him. The old father-ego itself comes to an end; the new-born are here with their fellows, leaving father and mother, following Jesus. "And stretching out his hand towards his disciples, he said, 'Here are my mother and my brethren!' " (Matt. 12. 49). An untamed ego has burst through, has broken out of the sober nest with its authorities. Only the chosen disciples are his relatives — but closer still to all of them is the common element relating them in a no-longer oppressive bond.

The alien factor may of course be something quite different from mother and brethren, and it may have become alien long before Jesus. It all started quite boldly — started out from within itself; and it has "corrupted" youth.

In this section Bloch makes it clear that ‘what was must be tested’ and this means, in the context of today’s service, a testing of Advent and Christmas. A church service such as this, shaped with a creative and critical community of people such as you in mind, should always be a time of testing what was. But during the Advent and Christmas seasons, because the stories are so good and so beautiful, the temptation is not to be at all critical and instead just to dive uncritically, naively and sentimentally into the seductive stories themselves: Even I can hear myself say ‘Oh, Andrew, give us a break at least during one season of the year! - stop thinking, hang loose, roll with the season’s happy vibe. Just dig the beauty, man.’ But, you know, I can’t do this because, ultimately, not to think critically about these kinds of questions cuts us off from the real healing and sustaining power that remains accessible to us in our inherited religious tradition. During this increasingly difficult period in our culture’s political, social and religious history, and at the coldest time of the year, I want to ensure that our Advent and Christmas celebrations do genuinely help and strengthen us and don’t just offer merely the opportunity to engage in a bit of temporary self-medication whether of the alcoholic or the opiate kind pointed to by Marx.

Bloch suggests that one important thing we have to ascertain is whether or not the ‘Where-to’ continues to live before us in the thing itself’? Well, to answer this requires us first to answer the question of what he means by the ‘Where-to’? For Bloch it is tied up with his very specific understanding of utopia which in his eyes was not something we construct in the present as an ideal and then project it into an imagined real future but, instead, something always available to us in a variety of ideas, political and social systems and cultural artifacts although only in glimpses or through what he calls ‘traces’. The ideas, systems and cultural artifacts that have the most enduring power over us to his mind always contain two elements that, at their best, are never either/or options but always in creative dialogue and tension with each other. Bloch felt that this helped ensure that these things ‘carry within them the potential solution of that situation’ (Peter Thompson in his excellent introduction to Bloch's Atheism in Christianity, p. x).

The first element, the conservative, is that which supports the status quo, especially that expressed in a given society’s present power-relations and structures; it is the element that encourages us not to rock the boat and which gives us an often false sense of security that things are, really, all OK. The Advent and Christmas stories clearly also have this element in them and they have it in spades. Perhaps the most obvious public expression of this element is the fact that in our largely secular and unchurched nation church attendances rise significantly at this time.

So what is the ‘Where-to’ we can glimpse in the whole of the Biblical text and, particularly today, in the Advent and Christmas stories?

Firstly, he sees that the Biblical text always contains within it a strand which encourages us not to go back the way we came but, instead, to follow the path of our own free choice. He uses the example of Ruth to illustrate this but the Advent and Christmas stories too are marked by this trope - most notably in the stories found in Matthew of the Magi and Mary and Joseph.

This may come as a surprise - even a shock for some people - but, as Bloch says elsewhere in this book: ‘There is only this point: that the Church and the Bible are not one and the same. The Bible has always been the Church’s bad conscience.’ Although this book has often been used as a cattle prod to by the powerful it is vital to recall (because it is too easily forgotten) that ‘the counter-blow against the oppressor is biblical, too, and that is why it [the Bible] has always been suppressed or distorted, from the serpent on’ (AIC p. 13).

The Bible has always been a book in which ordinary people, those who throughout history find themselves oppressed by Church or State, can readily hear a straightforward call to freedom from oppression found most tersely expressed in Exodus (cf. Ex 5:1) “Let my people go.” A call which Bloch observes, citing the mighty 16th century radical German reformer Thomas Müntzer, ‘Rang out to all the oppressed, “without difference or distinction of race or faith.”’ This kind of world is the ‘Where-to’ that continues to live before us in the Biblical text itself and especially clearly and beautifully in the Advent and Christmas stories.

Our trajectory towards a way of building, dwelling and thinking that is concerned always to be seeking to free people from all oppressive and coercive bonds (a ‘Where-to’ of Advent appropriate for us) may well take us away from our Christian tradition at a singularly sharp angle (and it’s a trajectory that I think is required of us as a necessity requires) but I do not think that, at the same time, this also requires us to ditch the Biblical text. Far, far from it because, whenever we take it seriously in the way a thinker like Bloch insists we should, we will always be with earshot of a powerful and inspiring call to a life of radical, revolutionary action against the rich and powerful and in favour of the poor and dispossessed. In our own time and culture - as we face up to all kinds of repressive forms of religion and oppressive political and financial ideologies - such a radical call is becoming increasingly necessary.

To be sure, I hope many of us will enjoy the rest and security that so often accompanies the Advent and Christmas season but, as we enjoy this rest and security (the season's conservative element), may we never forget that they are nothing if they do not form part of a preparation for some serious, committed action to bring about the better and more just world we claim we want to see come to pass.
Email Post
Labels: Advent Atheism in Christianity Christmas Day Ernst Bloch Marx Peter Thompson Thomas Müntzer
Andrew James Brown
My name is Andrew James Brown. I’m a philosophically/theologically inclined writer with sympathies towards Shin’ichirō Imaoka’s understanding of free religion (自由宗教), Christian atheism, D. G. Leahy’s “thinking now occurring for the first time”, a Lucretian inspired religious naturalism, new materialism and Kyoto School philosophy; also a photographer, cyclist, walker and jazz bass player. In addition to this, I’m the minister of a small, liberal, free religious community in Cambridge (UK)