A light/clearing in the darkness - Christmas Day 2010 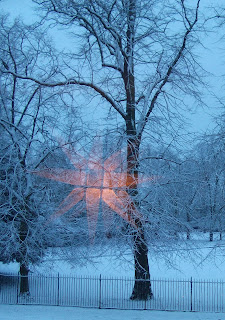 In a recent very witty book called 'Reason, Faith and Revolution - reflections on the God debate' Terry Eagleton, Professor of Literature at Lancaster reminds us that in the 1960s there were a number of influential radical Catholic theologians who did not:

". . . see God the Creator as some kind of mega-manufacturer or cosmic chief executive officer, as the Richard Dawkins school of nineteenth-century liberal rationalism tends to imagine - what the theologian Herbert McCabe calls 'the idolatrous notion of God as a very large and powerful creature." Dawkins falsely considers that Christianity offers a rival view of the universe to science. Like the philosopher Daniel C. Dennett in 'Breaking the Spell', he thinks it is a kind of bogus theory or pseudo-explanation of the world. In this sense he is rather like someone who thinks that a novel is a botched piece of sociology, and who therefore cannot see the point of it all. [. . .] Christopher Hitchins makes much the same crass error, claiming in 'God Is Not Great' that [quote] 'thanks to the telescope and the microscope, [religion] no longer offers an explanation of anything important ' [unquote]. But Christianity was never meant to be an explanation of anything in the first place. It is rather like saying that thanks to the electric toaster we can forget about Chekhov." (Terry Eagleton, 'Reason, Faith and Revolution - reflections on the God debate', Yale University Press 2009, pp. 6-7)

I cite Eagleton's words as a preface to a poem by R. S. Thomas that for many many years I have thought about at this time of year. It is called 'Lost Christmas':

He is alone, it is Christmas.
Up the hill go three trees, the three kings.
There is a star also
Over the dark manger. But where is the child?

Pity him. He has come far
Like the trees, matching their patience
With his. But the mind was before
Him on the long road. The manger is empty.

One thing Thomas seems to be saying here, although I don't think he would ever have put it this way, is that if you are the kind of person who thinks the Christmas story (and the Bible as a whole) is a bogus theory or pseudo-explanation of the world or that a novel is a botched piece of sociology or that the electric toaster does indeed do away with any further need of Chekhov, then the manger is always going to be empty. Your mind, before you on the long road of life, will never let you see the Christ-child on this morning.

So far so witty. But 'Ditchkins' - Eagleton's amusing conjoining of the names Dawkins and Hitchins - 'Ditchkins' might legitimately come right back at me and say, but come on, what on earth does it mean to say we find the manger full or empty? Is not this line itself utterly empty of meaning?

Well, immediately, one thing I can say is that even in my mid-twenties, at the height of my Christian belief (which is not, of course, the same as Christian faith - but that's for another address), I never once woke up on a Christmas morning, went downstairs into the still dark kitchen only to smash my shin on a inconsiderately placed manger, thereby waking-up the little baby tucked-up inside it. Whatever else Thomas' final line, 'The manger is empty', means it clearly cannot mean an actually existing full or empty manger. So what might the line mean?

Well, it seems to me, I can only begin to proffer a helpful response to this question by referring back to a thought I explored with you earlier this year, namely, that our Enlightenment-inspired culture early on began to see one of its major tasks as the intellectual solving of the riddle of the world - truly, here we find an example of the mind preceding us on the long road of life. In 1942 Maynard Keynes made some comments about this which were recorded by the mathematical physicist Freeman Dyson (a man famous himself for work in quantum field theory, solid-state physics, and nuclear engineering). Apparently Keynes said:

"Why do I call Newton a magician? Because he looked on the whole universe and all that is in it *as a riddle*, as a secret which could be read by applying pure thoughts to certain evidence, certain mystic clues which God had laid about the world to allow a sort of treasure hunt to the esoteric brotherhood . . ." (cited in Ethics without Philosophy by James C. Edwards,  p. 235).

It really is hard to over-emphasize just how deeply this idea has rooted itself in European and North American culture. It was an idea which was taken up by both scientist and religious believer alike and which, as it has played out over the last three centuries, though it has brought some things that really do look like remarkable gains for human kind (including toasters), it has also led to some profound misunderstandings and into some terribly debilitating and dysfunctional spiritual and intellectual dead-ends. It really must be questioned whether this world is really best thought of, and lived in, as if it were merely a technical riddle to be solved. Perhaps some people will always think it is - Ditchkinites and religious fundamentalists in their own different ways may well continue in this fashion until their dying day - but it is clear to me that there is at least one alternative approach that we can consider and with it I'll conclude.

It is to approach the world, not as a riddle to be solved, but with an attitude of what we may call 'loving regard'. As James C. Edwards notes, "a feature of [such] love is that it never literalises any perception; love is always ready to go deeper, to see through what it has already seen" (ibid p. 236). He goes on to say:

"From the perspective of loving attention, no story is ever over; no depths are ever fully plumbed. The world and its beings are a miracle, never to be comprehended, with depths never to be exhausted. Thus the sound human understanding is essentially a religious response to the Pathos [impressiveness] of existence, not a magical or superstitious one. It is a response that makes sheer acknowledgment, not control, central" (ibid p. 236).

Here we can return to the side of the manger - surely the proper place to be on a Christmas morning. If Edwards is right that '[f]rom the perspective of loving attention, no story is ever over; no depths are ever fully plumbed' then we can continue to draw living water from the infinite depths of the Gospel (and every other great human story) only in so far as we ponder upon it like Mary (Luke 2:19) 'as if' for the first time. And, because, from the perspective of loving regard this 'always-the-first-time-journey' to the cribside is never naively literalised, it means we undertake this annual journey never having definitively decided beforehand precisely what it is we will find. Like the shepherds, all we must do is open-mindedly 'go even unto Bethlehem, and see this thing which is come to pass, which the Lord hath made known unto us' (Luke 2:15).

And surely, as the Gospel story continues to unfold and the Christ-child grows to maturity becoming our teacher and spiritual master, Jesus continues to teach us how to live in this world, not as if it were a riddle to be solved, but always as a living miracle, something never to be comprehended and with depths never to be exhausted. There is nothing magical or superstitious about this kind of celebration of Christmas because it is simply one possible sound human response to the Pathos (impressiveness) of existence - that this light or clearing (Lichtung) in the darkness is, and that nothing has overcome it. From the persepctive of loving regard the crib is never empty.