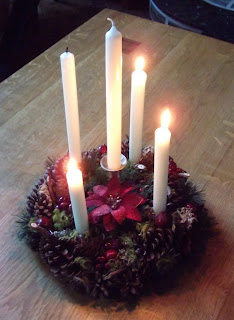 Again Jesus spoke to them, saying, "I am the light of the world; he who follows me will not walk in darkness, but will have the light of life." The Pharisees then said to him, "You are bearing witness to yourself; your testimony is not true." Jesus answered, "Even if I do bear witness to myself, my testimony is true, for I know whence I have come and whither I am going, but you do not know whence I come or whither I am going (John 8:12-14).

A few weeks ago we had a concert in the church - it was a good one and the folks involved were polite and respectful; anyway I like them and I like their music and I think it suits this church. To heighten the ambiance they turned off the lights, lit dozens of night-lights and placed them around the church. However, they had also lit the candles on the Advent Wreath (the picture at the head of this blog was taken after this morning's service). Fortunately, I came back into the church only a minute or so after this had happened and was able to put them out with out them burning down more than fraction. At the time quietly, but I’ll admit a bit irritatedly, I said to them something along the lines of, “Look, you haven’t committed some great metaphysical religious sin, there is nothing intrinsically religious or spiritual for us about a candle it’s just that, dammit, they have to last until Christmas - please just ask permission first before you light something that is *obviously* more than just a bunch of candles to be lit willy-nilly.” Apologies were proffered, no harm was done, we moved on and said no more about it.

But, during the course of the last two weeks the incident kept coming back into my mind partly because of what is, I think, a significant detail about which I haven’t yet told you. Although they had lit the four outside candles, they had not lit the middle one. Now why was that? After all a mass candle lighting had just taken place and it wasn’t as if they were holding back - but here was this single unlit candle in the church - and clearly left deliberately unlit. That it wasn’t lit suggests that the concert organisers did in fact see that the Advent Wreath wasn’t just a bunch of candles to be lit willy-nilly. Lighting the outside ones may have been OK but that tall one in the middle seemed to have shouted out to them in some way - “Don’t even think about, guys.” But what was - is - the voice they heard and what gave - gives - it authority such that they were minded to listen to it? This, for me, is the interesting question arising out of this little incident. I don’t know what their answer would be - and I’ll get round to asking them that - today I’m rather more interested in how we think it might be answered.

One answer that might be attempted in many (most?) Christian settings - is to make some kind of metaphysical claim that the Advent Wreath is a sign and symbol of a really-real essential and eternal world (God’s) that grounds our own (giving it meaning and worth etc.) and then to go and say that the concert organisers, even though they did not fully understand what was going on, caught a glimpse of this world beyond - they recognised, albeit through a glass darkly, an underlying ‘truth’ expressed by the central candle, the Christ-candle, the candle that is to be the light of the world for which we await - that the candles (and especially the central candle) are ontologically special or sacred.

We might be tempted to continue by rehearsing the basic symbolism of the Advent Wreath in the Christian context, pointing out that the successive lighting of the candles - an accumulation of light if you like - is an expression of our expectation as we await the birth of the Christ-child who is understood by us to be in some way ‘the light of the world.’ The final central candle, lit only on Christmas Day, stands for this light of the world. The circular form of the wreath is a gesture towards ideas concerning God's eternity and unity and the fact that it is made of evergreens gestures towards the idea of enduring life.

When you put these two approaches together there seems to arise a tacet claim that, as a symbol, the Advent Wreath can somehow apply itself and be meaningfully what it is independent of any human interpretation and that this is what the concert organisers saw - or so we might be tempted to say.

Perhaps we should not be surprised that such a line of thinking might occur to us in the Christian context for does not the writer of the Gospel of John tell us that he thought the same was true of Christ himself? - “I do bear witness to myself.” (True, a few verses later, Jesus realises that you must have at least a second witness for any claim reasonably to be trusted and he cites God as that second witness but, as we know, for John God and Jesus are one so Jesus - or rather John’s Jesus - continues to make the claim to be able to bear witness to himself.)

Anyway - are we right to think that the concert organisers caught a glimpse of an underlying truth or real world because of the Advent Wreath’s ability to apply itself independently of any human interpretation? Lovely and comforting though the idea might be I think I have to answer no. Why?

Well, the way we read and understand signposts (and our circular Advent Wreath is, as we shall see, a kind of signpost) is, as James C. Edwards points out, ‘so familiar to us that it is only in unusual cases that we have to ponder our ability to do this [reading].’ Generally this pondering only occurs when something goes wrong or, as we say, a ‘mistake’ is made - namely, for us today the lighting of the Advent Wreath candles. Edwards goes on to observe that this ability to read signposts and spot what we call a ‘mistake’ is:

‘a function of our training and of our innate ability to be properly trained, not of the “intrinsic” clarity of the sign-post per-se. The search for a self-applying formula - one whose intrinsic meaning is independent of a conventional, public practice of training and employment - is a paper chase that leads nowhere. There are no “intrinsically unambiguous” signposts’ (The Authority of Language, University of South Florida Press, 1990, p. 163)

The plain truth of the matter is that there is no single, intrinsically unambiguous understanding of the Advent Wreath or any other symbol. For us the meaning of this signpost is connected with particular circumstances which say to us ‘carry on’ in this rather than that manner - i.e. in an 'Adventy' or 'Christmassy' way rather than, say, a 'Harvesty' or 'Eastery' way. Its meaning is not dependent upon a world unseen but simply upon our particular community’s consistent practice of application of an evergreen circle with five candles burnt in a certain order which is tied to a specific set of stories and which we use to measure our journey through a particular season - which says to us, week by week, ‘carry on’ in *this* way. In other words understanding is application. But still, what about the fact that the central candle wasn’t lit by the concert organisers?

Well, it is important to remember that for virtually the whole of human culture/s there exists a consistent practice of application of circular forms to highlight, gather together, point to or focus upon something or activity we consider important, significant, meaningful.

The Advent Wreath repeats this use of the circle but think, too, for example, of speed-limit road signs or of circles spray-painted on the road to mark pot-holes to be repaired, the circus ring, the Colosseum or the massive stone circles of the megalithic period. This consistent practice of application of circles causes a 'voice' to shout out to us to look for something significant and it is an authoritative voice for us because we have been properly trained to recognise this use and not because there exists an intrinsic meaning of a circle or in our case an Advent Wreath. It seems to me likely that the Advent Wreath was recognised by the concert organisers as an important sign simply because of its clear circular form but it’s inherent ambiguity allowed it to be read as meaning something like: the middle-candle is important (though important for what reason we don’t know) so don’t light that, but the ones around the edge won’t be so important so it’s OK to light them.

What this suggests is that what we commonly call understanding is born in the first case not out of thinking but of doing. To understand the Advent Wreath is to DO the Advent Wreath - its meaning is wrapped up wholly in this doing. The concert organisers clearly had no training in this kind of doing but they did have, as we also have, a training in the use of circles. What they did was, for us a mistake - and it was a real mistake that should have been challenged (as I did) - but, again for us, we shouldn't see it as a deep ontological mistake striking at the heart of our being but simply a timely reminder that meaning is use and for this reminder we should thank them, really thank them. It helps us remember that it is not possible to rely on even our community’s greatest, most powerful, beautiful and loved symbols to carry what we might be tempted to call eternal unambiguous wisdom and meaning before us safely into the future so that those who follow us can, without any work or doing of their own, live a life of shared faith as we try to live a life of shared faith. If we value the Christian tradition - however we value and have faith in it, and whether we live it with metaphysical belief or without  - we must LIVE it. As the old saying has it: “use it or lose it.” As to whether our various expressions of this faith are to be more widely celebrated as constructive or feared as destructive I simply paraphrase our teacher - by the fruits of our doing shall we know and be known.
Email Post
Labels: Advent Wreath candles Christ the light of the world consistent practice of application James C. Edwards meaning is use mistakes signs symbols The Authority of Language
Andrew James Brown
My name is Andrew James Brown. I’m a philosophically/theologically inclined writer with sympathies towards Shin’ichirō Imaoka’s understanding of free religion (自由宗教), Christian atheism, D. G. Leahy’s “thinking now occurring for the first time”, a Lucretian inspired religious naturalism, new materialism and Kyoto School philosophy; also a photographer, cyclist, walker and jazz bass player. In addition to this, I’m the minister of a small, liberal, free religious community in Cambridge (UK)