Tracing paths of the world's becoming 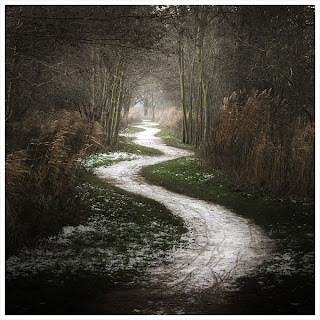 A couple of weeks ago I explored an aspect of Jesus' well-known story in which he said that although foxes had holes, and birds of the air had nests; the Son of man - i.e. Jesus himself, had nowhere to lay his head (Luke 9:58-59, cf. Matthew 8:19-20). I found it helpful then, and today, to add Tolstoy's unfolding of the teaching:

'And a certain man said to Jesus, "I will follow you no matter where you go." At this Jesus said to him, "There is nowhere to follow me. I have no home, no place where I could live. Only animals have lairs and dens, but man is at home anywhere that he can live by the spirit' (Leo Tolstoy - trans. Dustin Condren, The Gospel in Brief, Harper Perennial, 2011, p.66).

I was particularly struck by the fact that, for Tolstoy, to follow Jesus is not to follow him along a definable path - let's call this "Christianity" (though, of course, Jesus would never have called it this) - to an already pre-determined idea of a dwelling "place" - let's call this the "right" church with the "right" beliefs and practices - but instead a call to a way of being-in-the-world that is radically open to the creative, open-ended potentialities of the world as it is actually showing up to you, right here and now and then to develop a strong sense that living consciously and fully in such dynamic environment (in Tolstoy's language it is to be within the will of the father - though it is clear he doesn't think of the 'father' as would a traditional theist) is to find yourself always-already in your real home. The perception of this dynamic environment doesn't, of course, rely upon pursuing a literal, physical itinerancy but of being able to roam, in the spirit, freely through the world's constant unfolding - whatever that is.

Jesus' story and Tolstoy's this kind of take on it came back into my mind because I began to hear it spoken woven in with the first of the anthropologist Tim Ingold's essays in his new book "Being Alive - Essays on Movement, Knowledge and Description" which I mentioned to you last week. In it he points us towards the work of the French philosopher Merleau-Ponty one of whose conclusions was:

Ingold feels that, as Merleau-Ponty implied, it is, therefore, impossible to be sentient in an insentient world. An insentient world being one which is thought just to be made up of made up of, mostly, inanimate material things with "rigid, external surfaces" (p. 12). Ingold continues:


"To be sentient, to the contrary, is to open up to a world, to yield to its embrace, and to resonate in one's inner being to its illuminations and reverberations. Bathed in light, submerged in sound and rapt in feeling, the sentient body, at once both perceiver [of the world] and producer [of things in the world], traces paths of the world's becoming in the very course of contributing to it's ongoing renewal."

To be this kind of person is to be a wayfarer at home in an endlessly unfolding world, it is to become consciously aware that, in tracing paths of the world's becoming we can be helped to think of ourselves, not as discrete individuals with our own "rigid, external surfaces" placed amongst other individuals, animate and inanimate, but instead to understand ourselves as "a line of becoming." This thought might - indeed I think should - be extended to institutions. They also should not think of themselves as having "rigid, external surfaces"

However, here I have to add a further thought, because when we hear used the verb "becoming" we tend immediately to attach it to some kind of end point. Clifford Geertz, another anthropologist, once famously summed this thought up by saying, beginning "with the natural equipment to live a thousand kinds of life" each of us is supposed to "end in the end having lived only one" (cited in Ingold p. 3). But this idea, that life is "a movement towards terminal closure: a gradual filling up of capacities and shutting down of possibilities" (Ingold p. 3), is one that Ingold and, at least as I understand them, Jesus and Tolstoy want strongly to challenge.

They all want to replace the idea that life or the life-process is ends driven with, " . . . a recognition of life's capacity continually to overtake the destinations that are thrown up in its course. Ingold continues that:

"It is of the essence of life that it does not begin here or end there, or connect to a point of origin with a final destination, but rather that it keeps on going, finding a way through the myriad of things that form, persist and break up in its currents. Life, in short, is a movement of opening, not of closure" (Ingold p. 3-4).

Now it seems to me that this thought, that life is a movement of opening, not of closure, is something to which we must pay a great deal of attention because it may help us deal effectively with one of the great problems of our age. It seems clear to me that we are living in a confused and increasingly despondent culture and time. Because so much of our culture's self-identity had become wrapped up with the idea of inevitable material scientific, economic and social progress, we were all moving along what we thought was a predetermined path to sunny uplands in which all would live in material comfort and happiness, the failure of this to come to pass has really rocked us. In each of these areas - science, the economy and society - things haven't played out at all as we were led to expect and the feeling of cultural let-down is palpable. Our culture's primary map of the world - that is to say the structure we have used for well over a century to give our lives meaning and purpose - seems slowly but surely to have been very wrongly drawn.

So what to do? Well, we could choose simply to wallow in despair. Many are and it's certainly a popular response. A connected response is to slip into various forms of nihilism - basically giving in to a thoughtless and destructive hedonism. Another response is to impose on the situation old, supposed, solutions  - a version one is to harken back to what are falsely perceived to be earlier religious or political certainties.

On the other hand we could choose to acknowledge that our culture's map was wrong in some fundamental ways. It is a truism but admitting that your map is wrong and that you are lost is the first important step to finding out where you are.

Admitting that our old map was wrong cannot stop the grand correction that is coming closer by the day and which will clearly bring with it many difficult decisions and hardships for us all. But such an admission can open us up to the possibility of seeing a world of meaning and belonging that doesn't rely on ends-driven wholly material views of the world and our life in it. If we can see this different world of meaning and belonging then we might not only be helped to get through the next difficult decade or so, but we might find that as individuals and as a people we have become healthier and wiser in the process.

So now I can return to Tolstoy's reading of Jesus teaching and also Ingold's various insights.

The chief thing I think we need to do is to ditch completely any religious, philosophical and political model that claims it knows absolutely and beforehand where it is you, me, we should be going.

We need to locate our sense of belonging and, therefore, our sense of worth and meaning, not in fixed ends - the holes of foxes and the nests of birds - but in paths of the world's becoming. As individuals and as a church community we have to begin to understand ourselves and "lines of becoming" rather than continuing to see ourselves as discrete, disconnected things.

We have to sense how we play our part in contributing to the world's ongoing renewal - which is simply to say that we learn to recognise that we are part of life which "does not begin here or end there, or connect to a point of origin with a final destination" but which instead "keeps on going, finding a way through the myriad of things that form, persist and break up in its currents.

We have to begin to teach people - that includes ourselves - to see that life "is a movement of opening, not closure."

I can bring these thoughts to a temporary pause - after what I have said it should be clear we cannot here have a closure or an end - by bringing into the picture the image of a marriage. Our final hymn today is a marriage hymn and here is why I have chosen it ('We come, dear Lord, to celebrate - by John L. Bell).

This is the kind of following of Jesus I hope a church like this can encourage. It is not to become a Christian (or any other extant form of formal religion) - to hunker down in holes and nests - but to become a bride or groom of unfolding life.

Yewtree said…
I am currently reading Maggie Ross' Writing the icon of the heart and your third paragraph resonates massively with the piece in it that I was reading this morning, entitled "The space of prayer".