Before I begin I want you to be aware that throughout I use the terms "9/11" and the "11th September 2001" to refer to different things. At no point do I use them synonymously.

I tried very hard to resist the pressure to speak today about "9/11" but as you all know there was no escape from it this week thanks to the many hours and countless column inches devoted to it in the media. To this one must add the plain and simple truth that for many reasons the events of that day influenced me profoundly and contributed to a major change of emphasis in my own personal political, religious and emotional way of being-in-the-world. Given these factors not to say something today about "9/11" seemed, in the end, to be odd and counter-productive.

On the other hand I still felt a very strong desire not to talk about the matter. By this I do not mean I wished merely to ignore "9/11" but I did want to find a way to make it clear that I was actively *not* talking about it and to freight this act with useful meaning.

To help me explain why I feel the need to do this I want to introduce a distinction between "9/11" and the "11th September 2001". Thanks to an ongoing post-hoc analysis "9/11" is now the name, a proper noun, which refers to the increasingly complex story or stories that have grown up in the shadow of the events of the "11th September 2001". This is not to say that this process is a bad thing and, at its best and when it is not merely trying to create politically expedient myths (expedient either for the USA, its allies or its enemies - real or invented), the process of turning the catastrophe into a story can help all of us find understanding, healing and acceptance.

In a book called "Young Men and Fire" the author Norman Maclean (best known for his story "A River Runs Through It") tried to do this about the death of thirteen Forest Service Smoke-jumpers in Mann Gulch, Montana, on 5 August 1949. The book was a product of his strong belief that "in this cockeyed world there are shapes and designs" and he felt that "if only we have some curiosity, training, and compassion and take care [also] not to lie or to be sentimental" (Maclean p. 37) then we could reveal these same shapes and designs which allowed the living to remember creatively and unsentimentally and, thereby, learn how to continue to live better and more hopefully in the days to come.

"If a storyteller thinks enough of storytelling to regard it as a calling, unlike a historian, he must follow compassion wherever it leads him. He must be able to accompany his characters, even into the smoke and fire, and bear witness to what they thought and felt even when they themselves no longer knew. This story of the Mann Gulch fire will not end until it feels able to walk the final distance to the crosses with those who for the time being are blotted out by smoke. They were young and did not leave much behind them and need someone to remember them" (Maclean p. 102).

It strikes me that what is true of the young men who died in Mann Gulch remains true of the nearly 3,000 men and women who died on the 11th September 2001. However, I fear that the story of the whole - that is to say the story called "9/11" - has largely been co-opted by our culture for less than honourable and healing ends.

Anyway, if you want to hear about "9/11" then I simply refer you to the many politicians and cultural commentators whose words you have heard this week and will be hearing more of during the coming days, weeks and years.

But today I want to draw your attention to the day the "11th September 2001" which in a key, even fundamental respect was a day like any other. I want to do this because I think it is important to make visible a general background without which we can all too easily develop a dangerous sense of human power and control - the same sense of power and control that made possible both the events of "9/11" and which continue to cause conflict around the world. Perhaps more importantly I want to do it so that when I conclude we can simply rest silently together in non-partisan human solidarity with those who died.

But how to show you this background, this "11th September 2001", when every memory, every picture, every piece of footage, every witness' story of the day is by now so coloured by "9/11"? I admit that it is hard and I'm not sure I can do it but even if I succeed in giving you the briefest and most fleeting glimpse of it today then this will be sufficient. 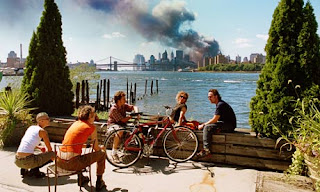 I can only hope to do this via the picture and article that helped me catch a glimpse of it. The picture, by the senior Magnum photographer Thomas Hoepker, shows a group of New Yorkers sitting chatting in the sun in a park in Brooklyn whilst behind them, across the East River, is rising the cloud of smoke and dust that marks the place where the Twin Towers stood only a short time before. The article is about the picture and was written last week by the Guardian art critic Jonathan Jones.

Probably wisely, Hoepker did not feel it was appropriate to publish his photo in 2001 and it was only in 2006 that it appeared in a book and not surprisingly it quickly became a cause of controversy. As Jones tells us:

'The critic and columnist Frank Rich wrote about it in the New York Times. He saw in this undeniably troubling picture an allegory of America's failure to learn any deep lessons from that tragic day, to change or reform as a nation: "The young people in Mr Hoepker's photo aren't necessarily callous. They're just American."'

However, as Jones notes,

'Rich's view of the picture was instantly disputed. Walter Sipser, identifying himself as the guy in shades at the right of the picture, said he and his girlfriend, apparently sunbathing on a wall, were in fact "in a profound state of shock and disbelief". Hoepker, they both complained, had photographed them without permission in a way that misrepresented their feelings and behaviour.'

If nothing else this reveals the important truth that one cannot photograph a feeling. But another important thing of which Jones reminds us is that this was the only photograph taken that day which seems 'to assert the art of the photographer'.

' . . . among hundreds of devastating pictures, by amateurs as well as professionals, that horrify and transfix us because they record the details of a crime that outstripped imagination – even Osama bin Laden dared not expect such a result – this one stands out as a more ironic, distanced, and therefore artful, image. Perhaps the real reason Hoepker sat on it at the time was because it would be egotistical to assert his own cunning as an artist in the midst of mass slaughter.'

But ten years on it is precisely this artistic distance that counts and which helps us glimpse something that is most certainly not the egotistical cunning of an artist. This "something" is, paradoxically, the strange closeness to the "11th September 2011" the picture affords us. 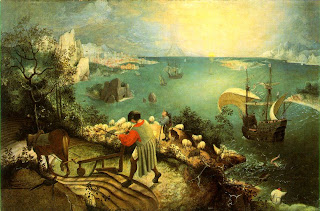 Jones begins to help us to see/feel this by reminding us of the famous Renaissance painting by Pieter Bruegel, "The Fall of Icarus", in which he depicts a peasant ploughing also seemingly untroubled on as Icarus falls into the sea to his death. This painting along with W. H. Auden's poem "Musee des Beaux Arts" which references it 'captures something that is true of all historical moments: life does not stop dead because a battle or an act of terror is happening nearby'.

About suffering they were never wrong,
The Old Masters; how well, they understood
Its human position; how it takes place
While someone else is eating or opening a window or just
walking dully along;
How, when the aged are reverently, passionately waiting
For the miraculous birth, there always must be
Children who did not specially want it to happen, skating
On a pond at the edge of the wood:
They never forgot
That even the dreadful martyrdom must run its course
Anyhow in a corner, some untidy spot
Where the dogs go on with their doggy life and the torturer's horse
Scratches its innocent behind on a tree.
In Breughel's Icarus, for instance: how everything turns away
Quite leisurely from the disaster; the ploughman may
Have heard the splash, the forsaken cry,
But for him it was not an important failure; the sun shone
As it had to on the white legs disappearing into the green
Water; and the expensive delicate ship that must have seen
Something amazing, a boy falling out of the sky,
had somewhere to get to and sailed calmly on.

Hoepker's picture shows us this same truth in the visual imagery of our own age, an age in which most of us are not ploughmen but men and women whose daily work includes the possibility of taking a break in the sun by a river with friends. Like the Breughel's ploughman, as Jones says, 'The people in this photograph cannot help being alive, and showing it.'

Hoepker's and Breughel's picture and Auden's and Jones' words shockingly (if artfully) remind us that we live in a world that in its immediate and constant unfolding is beyond simple static human knowing and to be living is to be beyond the possibility of stopping before any event, fact or thing with our minds filled with a complete knowledge of what is going on and to pose in a way our future selves/generations might deem appropriate. To be sure after the event we can always analyse, interpret, create healing stories or dangerous myths about these events, facts and things (and these will say something meaningful to us) but we must never forget that all these activities are always undertaken against a general background of radical not-knowing and against a knowledge that despite this we cannot help but being alive and showing it. Is this not what was shown by all of us on the "11th September 2001" in some way or another?

"9/11" tries, understandably, to explain, to regain some power and control over the events. This, inevitably, distances us from the 3,000 people who died for they most certainly did not understand, they did not have any power or control.

Anyway, with these thoughts in mind it now behoves us to consider what we are to do as we stop now to remember and pay respect to the dead.

Are we to remember what our culture tells us the day meant or are we here to remember and stand in solidarity with the ordinary men and women who were doing ordinary things and in which we also acknowledge a basic aspect of the human condition that we cannot help being alive and showing it - even in the face of death?

As we break our silence let our memorial of that day be a healthy and healing knowledge that whatever befalls us we cannot help being alive and showing it and may we always ensure that this showing is one which encourages us, not to acts of violence and hate but those of compassion and forgiveness.