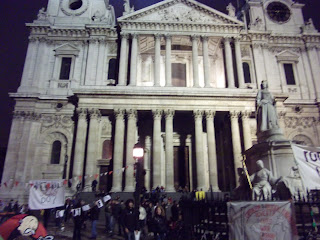 As I mentioned yesterday a few of us (five to be precise) from Cambridge were moved to show our support to the protesters occupying the space to the side of St Paul's Cathedral and holding it's meetings and General Assemblies on the steps of the main west doors.

We attended their General Assembly last night and were very impressed at the process they were employing - especially since they were discussion a document that had been released to the press in a fashion that made it appear as if it were one of their official collective statements - which it was not. There was some real heat generated about this but the process of genuinely open discussion meant that this tension was worked through in a very impressive fashion. Truly we saw a genuine grass roots democracy at work.

Also impressive was their recognition that they had to take their time - they know (and so do we) that sound-bite length gestures are not sufficient because we all need to be beginning a lengthy and genuinely deep and global-wide conversation on how we should be distributing the wealth and resources of our planet for the use of all.

My friend and colleague, Dr Claire Henderson Davis prepared a personal statement (which I wholeheartedly endorsed) which she gave to both the BBC and to the protesters themselves. Claire and I also had a very brief interview with the BBC about her statement and the general situation. I doubt the footage will be used by them but this Sunday (6th November) at 10.30am Claire will offer the statement up to the Memorial Church to encourage us to further thought and reflection. On Sunday afternoon I'll publish her statement on this blog so we can talk about it further at the Wednesday evening conversations in the church hall (7.30pm for 8pm). As of this moment it also looks like there'll be other initiatives developing here in Cambridge - I'll keep you informed of them as they happen.

As Claire says 'this is a prophetic moment and we will be poorer for not seizing it.'

So I invite you to come on Sunday morning to hear Claire speak and/or to join in the conversation on this blog and, of course, on the many other forums available to begin and continue the much needed conversations about alternative ways of organising ourselves.

But in general I urge you all to support the protesters in focussing our attention on the pressing need to sit down and work through this mess which our present financial and political systems have created for everyone. It's time to talk change.

kbop said…
good work; keep it up. Read Monbiot in today's Guardian about the City of London Corporation if you really want to get pissed off.
1 November 2011 at 09:07