A Quiet Opening - on why a certain kind of wire fence might be a good model for liberal religious communities to consider following . . . 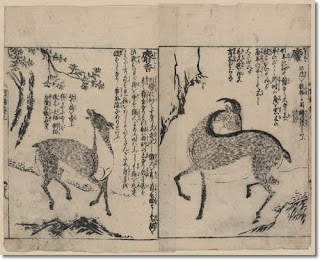 I brought a version of this address before you last year after having been introduced to the poem by Jane Hirshfield called 'The Supple Deer' by a photo-journalist called Kennedy Warne who was visiting us from New Zealand (Greetings, Kennedy). It struck me then that this was a text which could be very helpful to us as we continue to consider our present possibilities as a certain kind of liberal religious community. My reason for giving this address again today is simply because I have put my back out and the combination of pain and pain killers so numbed my brain that I had to tear up the address I had been writing and look for one I could meaningfully give again. I also quite liked the dark irony of talking about using a poem called "The Supple Deer" when I am expressing in my own body a painful lack suppleness. Perhaps this fact preaches to me another sermon which I need to heed . . .

Anyway, as before, let's start with the some of the themes and ideas Hirshfield's poem contains.

Hirshfield begins by presenting us, in a very minimal, almost calligraphic, brush-stroke way, the two characters who will play out before us an exquisite, miniature drama. The first is the wire fence, the second, a supple deer - a stag.

[And the deer]
Antlers to hind hooves,
four feet off the ground

These characters meet in the moment when she suddenly sees the deer pour through the fence leaving not even a scrap of hair as evidence that this event had occurred:

If you have ever seen this happen you will know it occurs so fast and fluidly that, like Hirshfield, you simply don't know how this could happen:

In that moment of heightened wonder and sensitivity she tells us that she has never before felt such 'accurate' envy.

On my first few readings of the poem this line jarred with me because in our culture envy is strongly felt as something not at all good - don't forget that the tenth commandment warns against covetousness. So why on earth, at this moment of water-like clear beauty, does Hirshfield seem to dirty the image by using use the word 'envy'? We must also ask why she also modifies it with the adjective 'accurate'?

I confess that I had to put the poem aside for a few days to feel my way through this but, in the meantime, I was sufficiently intrigued by Hirshfield's writing to hunt out a book of her essays. At the end of one of them entitled, "Poetry and the Mind of Concentration", she notes:

"No matter how carefully we read or how much attention we bring to bear, a good poem can never be completely entered, completely known. If it is the harvest of true concentration, it will know more than can be said in any other way. And because it thinks by music and image, by story, passion and voice, poetry can do what other forms of thinking cannot: approximate the actual flavour of life, in which subjective and objective become one, in which conceptual mind and inexpressible presence of things become one.
Letting this wideness of being into ourselves, as readers or as writers, while staying close to the words themselves, we begin to find a way of entering both language and being on their own terms" (Jane Hirshfield, "Poetry and the Mind of Concentration" in "Nine Gates: Entering the Mind of Poetry" Harper Collins 1997, p. 31-32).

The first thing that jumped out at me as I read this - apart from the crucial reminder that no poem can be entered completely - was Hirshfield's belief that a poem can "approximate the actual flavour of life". 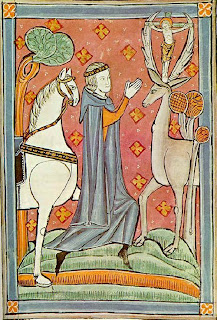 It is to be regretted that in Western Europe and North America in much of our theology and philosophy - especially as it has developed since the Enlightenment - we have tried to articulate our beliefs and hopes about life in rather ideal, clean and perfect ways leaving out the craggy moments, the moments of "decollage", where things get unstuck and a bit messy. Consequently, we have often failed to serve up to each other in our theology and philosophy an important actual flavour of life. In Hirshfield's poem she reminds us of an important flavour we often want try to cover or ignore because I'm sure that, despite all our own personal religious and philosophic ideals, there is no one here today who has not, at sometime in their life, felt and been shaped by the emotion of envy. It remains a painful truth, but a truth nonetheless, that envy is an actual flavour of life and we should not be surprised that the suppleness we see in the deer might move us to envy. For me, with my bad back, today this especially true! I'll return to envy in a moment but at this point in the address I say that we are envious of the deer because I'm presenting this *as if* I were reading through the poem line by line for the first time and, since the poem is entitled "The Supple Deer" nothing, so far, has hinted that I should be envious of anything but the deer. After all the deer is a powerful and attractive subject in many human cultures across the ages. In Celtic mythology it is a symbol of the "otherworld"; in the Arthurian legends pursuit of the deer is symbolic of humankind's spiritual quest; in Christianity it is a symbol associated with Christ himself; and in Chinese culture (and I remind you here of the picture at the start of this post) the word for "deer" is a homonym for "abundance".

But, before we consider another point from Hirshfield's essay we need to experience her (what is called in the movie or feature writing business) delayed drop.

I have to say that her penultimate line was, for me, completely unexpected. In it she reveals that her accurate envy is "Not of the deer". Oh my! We suddenly realise that she is envious of the fence! Her envy, she explains, is connected with the porous quality the fence has which is what allows the largeness of something like a subtle deer to pass through it:

To be that porous, to have such largeness pass through me.

Given this why on earth has she called the poem "The Supple Deer" and not the "Quiet Opening"? We'll get to this in a second but, for the moment, let's return to a consideration of inaccurate and accurate envy.

All too often we can become envious of people who have certain external possessions that we imagine could bring us happiness. It seems to me that this kind envy is inaccurate  because we know, or at least I hope we know, that happiness will not come to us just through external possessions. In this mode of envy, to use the phrase from Hirshfield's essay, "subjective and objective" do not become one and neither does our "conceptual mind and [the] inexpressible presence of things" become one. This kind of envy is inaccurate and all wrong because it separates and divides subject and object.

But remember Hirshfield's envy, she tells us, is 'accurate' and by this I take it to mean that for her it *has* focussed upon something that she truly knows will bring her the wholeness and happiness she, and we, really desire. Given the link already between the Chinese word for deer and abundance (lu) it is impossible for me not to think here of the abundant life Jesus promised us could be ours: "I am come that they might have life, and that they might have it more abundantly."

This kind of 'accurate envy', the envy of seeing something we know we need is precisely what helps drive us to repent of our old ways of being and to begin to transform and transfigure our lives in creative and healthy ways.

It seems to me that the 'accurate envy' of which Hirshfield speaks (and which Jesus so often evoked in his hearers) is the desire for an openness of being already gifted to us but which, until that moment of accurate envy sprang up in (through?) us we had not previously been able to see we always already contained. 'Accurate envy' simply names the transformative process by which, as Hirshfield says in her essay, the wideness of being is recognised, nurtured and made manifest in our own lives.

So, if the fence has the quality of wideness about which Hirshfield feels envy, why on earth does she call the poem "The Subtle Deer"? Why doesn't she call it "The Quiet Opening"?

Well, it is true that the poem seems not to be about the deer per se but it is important to see that the poem *is* about the "largeness-of-the-deer" which pours through us whenever we allow this wideness of being into ourselves. This porous quality, this wideness of being, is only made visible to us and others in so far as something as supple and as large as the deer, that something which is more-than-ourselves is then allowed through us - the supple deer stands for the supple, creative 'more-than-ourselves' things, like love, justice, compassion (elements of the kingdom of God) that we can now allow pass through us into the world. The enduring power of Jesus (and all great teachers) is felt in the "largeness" that we sense is passing through them.

Although at first sight (thought) a certain kind of wire fence might not be the most obvious or appropriate model that a liberal religious community might think about as it considers its own form Hirshfield's poem suggests otherwise. We have become dangerously used to thinking that the best way to be liberal and open is to be loose and flabby in form but I take Hirshfield's poem to be suggest otherwise, namely, that minimally drawn yet strongly disciplined and tight forms are perhaps more capable of creating and holding open the kind of quiet opening through which the largeness of a supple deer (the kingdom of God) can pass and allowed into our world to run free giving people the good news (Gospel) that there is an abundant life for all.