Easter Sunday - "Jesus died but Christ has triumphed" - believing in not a single impossible thing before, or after, breakfast

On this most joyous day of the Christian year one thing is clear, that without a "Resurrection" there would be no Easter Sunday and without the Easter "event" it is unlikely that anything like Christianity would have come into being.  That this event was of central importance to the early Christian community can be sensed in St Paul's words who said:

But before we deal directly with what for our age and culture is a difficult claim it is vitally important to see that without the coming into being of Christianity after the first Easter, nothing of what we are as a radical, liberal Christian tradition prepared willingly to travel beyond the boundaries set by formal Christian belief would today be possible. In short, for a community such as our own to deny the central importance of the Resurrection or even simply ignore it as irrelevant is as pointless an exercise as railing against the rising of the morning sun. It's always-already part of our community's history and we have to take it into account. 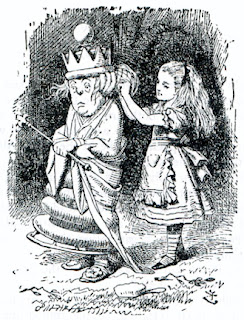 Ah, you may argue, today we know that the sun (Helios) actually rises whereas Jesus, as a son of God, most certainly doesn't. But such a thought is precisely one which can open us up to another way of looking at things that doesn't require us, like the White Queen in "Alice through the Looking Glass", to believe in six impossible things before breakfast.

Given these things we have before us at least two questions. One, what are we going to do with this historical "fact", namely, that without the "Easter event" (whatever it was), we would not be here today and, two, can what we do with this fact help us reconnect in some real way with something like the empowering sense of joy and hope that was felt be our forbears during and after that first Easter?

However, because we are so thoroughly imbued with scientific, skeptical  critical spirit of our age, the truth remains that access to the joy and hope of the "Resurrection" is barred to many of us. It seems to me that what we need to do is not to lose our scientific, skeptical  critical spirit - it is I think vital to human well-being - but rather to broaden it, supplement it. Like the Roman poet Lucretius this would be to live acknowledging both the power and the place of knowledge of nature's "inner workings" (ratio) and the kind of knowledge we can derive from  nature's poetic face (species).

So let's return to my point that for us to deny the importance of the "Resurrection" is as pointless an exercise as railing against the rising of the morning sun. As we do this let us also notice that, after Copernicus, an important shift occurred in the human perspective on the nature of things when we realised that in a heliocentric universe the sun, Helios, cannot be said to rise at all. Today we know it's all about the orbits of planets moving around a local star, all of which is all taking place in a universe with no absolute up nor down.

And yet, for all that, as I awoke this morning I can still meaningfully say to you that I felt the good earth down *below* my feet and, when I looked *up* into the sky, I still found myself giving thanks that the sun had risen *above* the horizon and that a new and hopeful day has dawned down *below* on earth.

Although as a human being decisively shaped by scientific knowledge I understand that what I mean when I use the words "Helios, the Sun, has risen" is different from the full meaning and use it had for our pre-Copernican forebears, this does not stop me from continuing to use with you, legitimately and meaningfully, the words "the Sun, Helios, has risen."

It seems to me that something similar is true in connection with the "Resurrection." Today, at least for me and I know for many of you, belief in the literal resurrection of Jesus is impossible to hold. The passing of two thousand years and a great deal of human thought and experience has gifted us with a body of evidence which overwhelmingly indicates that the physical resurrection of the dead is an impossibility. This change in human perspective means I can say with considerable (though never absolute) authority that I know Jesus, the son (of God), did not rise from the dead on that first Easter morning.

And yet, and yet as I awoke this Easter morn, felt the good earth beneath my feet and looked up into the sky at the risen sun, Helios, I still found myself giving thanks that Christ, the son of God, has risen and a new and hopeful day has dawned down here on earth. More even than this, for knew I was going to offer you this address which will conclude with the traditional Paschal greeting "Alleluia! Christ is Risen! He is risen indeed! Alleluia!" Now, why might I, someone who does not believe in the literal resurrection of Jesus, feel able to do this and, not only that, but really mean my Alleluias?

Well, we can begin to move towards an answer by noting that for our forbears Jesus and Christ were one and the same person, Christ was simply a title (meaning the Messiah, or the Anointed One) applied to Jesus; together this gave us what has become a proper name: "Jesus Christ." So, when our forebears spoke of Jesus they meant Christ; when they spoke of Christ they meant Jesus.

But today in a church tradition such as this everything hinges on making a distinction between the human being Jesus and the figure of Christ. As I have already said for me, Jesus the man died upon the cross and somewhere in that as yet undiscovered Syrian garden he, to this day, lies in perpetual peace.

But when I (on behalf of this tradition) begin to speak of Christ I am speaking of something intimately connected to the life and death of Jesus but which is significantly different. In the same way the meaning of the words  the "rising of Helios, the Sun" is different for us than it was for our forebears, the meaning of "the rising of Christ" is also understood differently. The roots of this difference lie with St Paul when he allowed us to understand the word "Christ" not as a single, discrete individual (Jesus) but as a present, living corporate entity. In Romans 12 (vv.4-5) he says: "For as in one body we have many members, and not all the members have the same function, so we, who are many, are one body in Christ, and individually we are members one of another"; and in 1 Corinthians 12 (v. 12) he says "For just as the body is one and has many members, and all the members of the body, though many, are one body, so it is with Christ."

Coupled with our increasing scientific knowledge this allowed our tradition legitimately to say that for us what was raised from death was not Jesus' body but the body of the spiritual community which followed him; a body which they named Christ. In short, they could begin to understand themselves as the bodily resurrection. Their hope for a radically egalitarian kingdom of heaven had died on the cross with Jesus but in Christ it was resurrected in them. This feeling (thanks to the stories which contained it) was successfully carried forward across generations and geography and centuries afterwards it was, perhaps, most strikingly put into words attributed to the medieval mystic St Theresa of Avila (1515-1582):

In our own time and family of churches this understanding of the resurrection has been no better, nor more simply expressed than by the recently retired Unitarian and Free Christian minister of Ipswich, Cliff Reed, in his Easter hymn that we will sing at the close of this service:

Jesus died, but Christ has triumphed,
Broken now the chains of death;
From the tomb comes God’s anointed,
Kindling cold hearts with his breath.

Now at last we see his purpose,
Breaking through like sunburst bright:
Liberation for God’s people
Ends humanity’s long night.

For there is a Spirit greater,
Who has now the victory;
And our God indwells the human,
striving for our liberty.

And that Spirit dwelt in Jesus,
Teaching us that love redeems;
How God, through a man’s compassion,
Gains great ends by human means.

But for love and life undying
Death of self must be the key;
Jesus died to bear this witness
And Christ rose to make us free.

Whether before or, as now, after breakfast, I would argue that there is to be found in Cliff's words not a single impossible thing (let alone six) in which we are being asked to believe. To proclaim the truth of the resurrection in this church is at heart simply to affirm that whenever a human community consciously tries to live together genuinely inspired by Jesus' spirit of love and compassion then, as they express this through the actions of their corporate body, then they most surely can say with full joy and meaning: