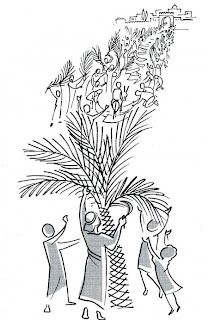 And from the conclusion to a chapter entitled Jesus by the Revd Dr J. Cyril Flower, minister of the Memorial (Unitarian) Church between 1922 and 1931. The chapter can be found in the book entitled "Aspects of Modern Unitarianism" published in 1923:

I confess that I find the laborious attempt to define what is called the "place" of Jesus, or any other great prophet of God, altogether unedifying. It is enough if we follow the light when and where we see it, in whose hands soever be the torch. When I am in Switzerland, worshipping God in the splendour of the snowy mountains, it is of no interest to me that, in India or America, there may be snow-clad mountains which are a few hundred feet loftier. If I am in Switzerland, let me breathe in the beauty of its mountain grandeur, and expand my soul in contemplation of the present symbols of the Infinite and the Eternal: he who is among the Rocky Mountains or in India can do nothing more, and should do nothing less. We live in an atmosphere and a civilization whose best characteristics  are steeped in the influence of Jesus. We are enlisted by birth, environment and choice, under his banner. There are other captains in the one great army of God; but he is ours, and we shall promote the success of the divine campaign for the kingdom of heaven, not by gossiping about the particular features, demeanour, or apparel of the various captains - but by lovingly and faithfully following our own; for all genuine religions are allies, and not enemies. The prophets of God are many, but God is one; and that under whatever banner India, China, England, Palestine may move forward, they may be led by their accepted captain, courageous, faithful, loving their brothers and honouring their leader, to God, should be the aspiration and the prayer of all who are disciples of Jesus of Nazareth.

Palm Sunday is a day which demands we ask ourselves once again the question about what is actually involved in continuing to follow Jesus’, something that we as a local liberal church we still claim to be attempting. As you know, when you come in to this church, hanging on the wall to the left of the door, is a hand-lettered inscription that includes the sentence “Our religious thinking is related to the teaching of Jesus and its application in the modern world.” (This phrase almost certainly comes from the pen of J. Cyril Flower and you may download a copy of his book The Parables of Jesus Applied to Modern Life by clicking this link).

To help us understand what following Jesus can mean in the post-modern liberal context we can usefully turn to something that shows up in the French language. In French the word “pas” has two meanings. The first meaning is straightforwardly a “step”, as in a taking a step forward. But it also has the meaning of “not” as in “Je n’avance pas.” This ‘literally means “I do not move forward, not even a step.” On this account pas as “not” (ne) is simply shorthand for “(not a) step” (John D. Caputo, What would Jesus Deconstruct, p. 141). John D. Caputo notes about this that:

The truth of this shows up very clearly when we consider taking steps towards another person because the relationship we can have with them is always a journey we cannot complete. Marriage shows this up particularly well. In marriage when you say “I do” you say it not simply to who the person is, or who you think this person is, but “to whomsoever or whatever this person is to become, which is unknown and unforeseen to the both of you” (ibid. p. 45). It is vitally important to see that this risk is constitutive of the vow and commitment. Without this risk the vow and commitment mean nothing.

So let’s now return to the roadside in first-century Jerusalem. You’ve heard about this man Jesus who has been doing and saying extraordinary things about a completely new way of being in the world. A way of being that promises a certain kind of freedom and justice for all, a kingdom of God that turns the whole world upside down such that it doesn’t resemble anything that has ever before been called a kingdom. All other kingdoms have been ruled by powerful rulers who rigidly impose upon the people a law that feels, and indeed is, a heavy and painful yoke. But Jesus says that the yoke of his kingdom is a light one and that the power in his kingdom is one based, not upon brute will and might, but upon love and compassion. These are strange but attractive words that speak of a condition which seems almost impossible ever to imagine as really coming to pass. For all that you feel deeply in your heart that it could come to pass and, faced with the less than desirable conditions of the time, why not at least go out and welcome such a man? So you take a step forward, you go to Jerusalem, you find your palm branch and you hail with Hosannas this possible Messiah.

But with your first step to that roadside you immediately run into the structural reality I’ve already mentioned and you see that it simultaneously brings with it the possibility of a “not” or a “misstep”. As you look around, yes, there’s lots of acclamatory noise but, over there behind the crowds, the Romans don’t look at all pleased and neither do the Temple authorities. Hmm. Is their displeasure a sign that Jesus is who he says, that the kingdom of which he speaks can actually come to pass? Or is it perhaps an indication that he is not who he says he is and that his kingdom is a foolish, even dangerous, piece of nonsense? Suddenly, you are face to face with the realisation that you don’t know and that the next step is not clear. So do you now take the risk of making a vow and commitment to follow him or are just going to get away?

What could make it clear? Nothing could – just like you know nothing can make it clear what is exactly to be involved when you say “I do” to the person you are about to marry. And by that road-side you also suddenly see that to promise to follow in Jesus’ footsteps is to engage in something like marriage. It could never be merely to follow who you, or some religious group, has decided Jesus is, but instead to follow whomsoever or whatever he is and who you are together to become . This is, of course, something always-already unknown and unforeseeable.

What was true for that first-century crowd remains true for us today. However, it is important to see that our understanding of Jesus (who he was, is and may become) is very different from that held by our forbears but so it should be - after all, we've been in a two-millennia long relationship (marriage) with him and, like a couple in a real marriage, we've both been radically changed along the way.

This means that, for those of us in the liberal Christian tradition, true loyalty to Jesus (to continue to try to step with him) is not to be loyal to some simple predetermined scheme or belief about in what forever will consist the right steps to take (steps that some church authority has decided it knows and which deemed to be fixed forever in certain rules or creeds) but, instead, it is to be loyal to a certain open-ended, trusting, loving way of walking through the world that helps us discern together how we might best take the next step, and the next, and the next. Its about how we create a meaningful continuity with our past but without turning this into identity with the past. It is also to root and ground ourselves in history (giving us a sense of home and belonging) but one which continues to allow us to be open to the world's ongoing formation.

This is to proclaim a Christianity after Christianity, a Christianity after all the security of believing that it is ever possible to know that your current views are right has fallen away and you are left simply with love and friendship – the central aspects of the kingdom Jesus proclaimed. It is to proclaim to the world an understanding of the Christian path that says, since we can never know in any final sense what following Jesus’ steps means, we must always be walking and talking lovingly and respectfully together and, in conversation and shared work, to see what shows up for us as a possible, reasonable shared next step – just like we do in every real marriage (gay or straight), any great friendship or any true secular democracy. As Caputo notes, this is faithfully to live in a tradition that “keeps “happening” (arriver) without ever quite “arriving” at a final, fixed, and finished destination” and to live in such a way that reveals we can never simply “derive” (dériver) direct instruction from Jesus but can only “allow it a certain drift or free play (dérive)." It is precisely this which allows our liberal tradition to be creative and to reinvent itself so that it can be, as Augustine said of God, 'ever ancient yet ever new’ (ibid. p. 57).