A contemporary thought provoked by watching "Sherlock Holmes Faces Death" (1943) about the appalling, current state of the British nation 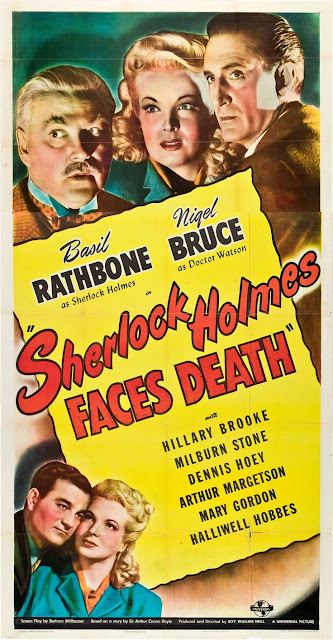 In Sherlock Holmes Faces Death (the sixth film in the Basil Rathbone/Nigel Bruce series) the writers loosely adapted Conan Doyle’s story “The Adventure of the Musgrave Ritual”, setting it during 1943. (You can watch the film at the Youtube link found at the end of this post).  I guess I should add a spoiler alert here because my words below reveal the end of the film. Read on only if you don't fancy watching the film without knowing how it ends!

So, at the very end of the film Holmes explains to the female lead, Sally Musgrave, that the document they have discovered means she is now the legal owner of the Musgrave estate upon which many people now live and have their own houses and businesses. Hearing this, Sally throws the document in the fire because she has no desire to be wealthy at the expense of others. Driving away from the estate with Watson, Holmes then gives an inspiring little soliloquy that was designed to express the filmakers' hope for the kind of world that would follow the Second World War then currently being fought. He says:

There’s a new spirit abroad in the land. The old days of grab and greed are on their way out. We’re beginning to think of what we owe the other fellow, not just what we’re compelled to give him. The time’s coming when we shan’t be able to fill our bellies in comfort while other folk go hungry or sleep in warm beds while others shiver in the cold; when we shan’t be able to kneel and thank God for blessings before our shining altars while men anywhere are kneeling in either physical or spiritual subjection. And God willing, we’ll live to see that day.

I won't tell you what words actually came out of my lips upon hearing these wonderful words — suffice it to say that they concluded by saying "God willing I, too, hope to live to see that day." However,  as I look about me seventy-three years later, I confess to feeling that I won't . . .

Come on folks, surely, we can organize ourselves so as to ensure Holmes' words have half a chance of coming to pass in our lifetimes?