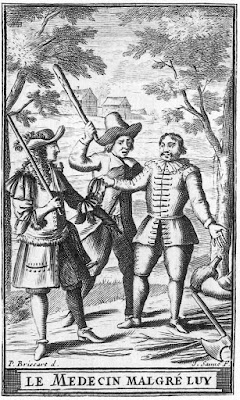 “When words are many, transgression is not lacking, but he who restrains his lips is prudent.”

From “Words and Transgressions” by the psychiatrist and student of Ludwig Wittgenstein’s philosophy, Maurice O'Connor Drury (1907–1976):

This then brings me on to the second danger of words, that which I have called the fallacy of Moliére’s physician. In one of his plays Moliére has a physician asked this question: ‘How is it that opium is able to put people to sleep?’ The physician replies with great profundity that it is because opium has ‘dormitive properties’, and this answer is found entirely satisfactory by his interlocutors. I think we all have a tendency to deceive ourselves in this way. To use obscure and learned phrases, thinking thereby that we have obtained a deeper insight. I remember as a medical student reading the chapter on fractures in a manual of surgery; it began by stating that by a fracture is meant ‘the dissolution of continuity in a bone’. This struck me as quite as funny as Moliere’s joke. It is a wise rule from time to time to force oneself to write down in simple language the precise meaning of any involved circumlocution we have become in the habit of using. If we did this we would find, I think, that such words as ‘hysteria’, ‘psychopathic personality, ‘character neurosis’, are symbols of our ignorance rather than of any understanding.

A couple of weeks ago I introduced you to the first of the psychiatrist Maurice O'Connor Drury’s five fallacies, ‘the fallacy of the alchemists’ taken from his very Wittgensteinian essay called “Words and Transgressions.”

This week we’ll look at his second fallacy, the fallacy of Moliére's physician. As you heard earlier, Drury tells us that,

‘In one of his plays Moliére has a physician asked this question: “How is it that opium is able to put people to sleep?” The physician replies with great profundity that it is because opium has “dormative properties”, and this answer is found entirely satisfactory by his interlocutors’ (p. 5).

Drury notes that he thinks all of us have a tendency to deceive ourselves in this way and that it is all too easy to use, or be taken in by, ’obscure and learned phrases, thinking thereby that we have obtained a deeper insight’ (p. 5). But, when we properly notice them, we see that these phrases merely repeat in a different way something we have already taken to be fact — in the case of opium, the fact that it has dormative properties and, in Drury’s other example taken from a manual of surgery, “that by a fracture is meant the dissolution of continuity in a bone.” And the net gain in understanding here? Nada, niet, nothing.

Drury next points out that when we notice we are engaging in the fallacy of Moliére’s physician the understandable thought is that we should engage in some experimentation in order to collect what we hope are new facts which will help better to explain, or help us better to understand, the first.

But done carelessly this can be simply to repeat the fallacy of Moliére’s physician by another route and, to illustrate this, Drury reminds us of a once fashionable experiment in psychiatry in which a patient was made to inhale a mixture of carbon dioxide and oxygen in order to produce ‘a dramatic emotional reaction’ (p. 6) — a reaction which was believed to be cathartic or purging for them. In psychoanalytical circles this reaction was given the name ‘abreaction’ (German: Abreagieren). Drury then tells us this cautionary tale:

‘One of my colleagues told me that he saw this treatment being administered to a rather timid little man who was the victim of alcoholism. When the mask through which the carbon-dioxide mixture was administered was firmly held over his face, this little fellow fought back with surprising fury. Ah! said the psychiatrist, now you see the cause of his addiction is this deeply repressed aggressiveness’ (p. 6).

‘On hearing this story I was reminded of Voltaire’s remark: “This animal is very dangerous, when it is attacked it defends itself”’ (p. 6).

The point Drury is making, of course, is that thoughtless experimentation and fact collecting of this kind is always liable to mislead and merely produce more unedifying, if occasionally funny, nonsense. As Drury makes clear, real experimentation that has a real chance of uncovering real new facts requires genuine research, and genuine research ‘means new ideas; new concepts, new ways of looking at old and familiar facts. The important part of research is the thinking done before the experimental verification gets under way’ (p. 7).

Drury’s simple cri de coeur at this point in his piece is that in our world ‘there is too much fact collecting going on’ (p. 7) and not enough thinking.

To reinforce this point he turns to a key figure in nineteenth-century physiology, Claude Bernard (1813–1878). Drury puts this observation of Bernard’s before us:

‘Two operations must . . . be considered in any experiment. The first consists in premeditating and bringing to pass the conditions of the experiment; the second consists in noting the results of the experiment. It is impossible to devise an experiment without a pre-conceived idea; devising an experiment, we said, is putting a question; we never conceive a question without an idea which invites an answer. I consider it therefore an absolute principle that experiments must always be devised in view of a preconceived idea, no matter if the idea be not very clear or well-defined. As for noting the results of the experiment, which is itself only an induced observation, I posit it similarly as a principle that we must here, as always observe without a preconceived idea’ (pp. 7-8).

Bernard expressed this insight in a more aphoristic and witty form when he said:

‘When you go into the laboratory do not forget to leave your imagination in the ante-room with your overcoat; on the other hand never forget to take it away with you when you go home’ (p. 8).

Now, why should any of this be of concern to us as a radical, liberal religious and, I hope, genuinely free-thinking tradition?

Well, I think it is because since our first explicitly Unitarian community formed in Poland in 1556 we have been working away critically — undertaking at times genuine research into religion and belief — to reveal many 'involved circumlocutions' that exist, not only in our own inherited monotheism but in all traditional religions. The situation is now such that most freethinkers (of which august if diffuse and rare body we hope to belong) realise much of our inherited religion really says nothing more about reality — i.e. what is really — than Moliére’s physician manages to say about opium or that manual of surgery said about fractures.

What we need to be doing, in my opinion anyway, is closely to follow Drury’s advice, borrowed from Claude Bernard, and to devise religious experiments ‘in view of a [new] preconceived idea’ and to ask new questions which invite new answers. As Bernard reminds us, it does not matter if the new idea be not very clear or well-defined but it most surely needs to be there before we do anything else — certainly before we collect any more facts.

It is extraordinarily tempting to me to bring before you at this point in the address the three experiments and sets of questions which invite answers that I’m personally pursuing. However, to do that properly would expand this brief address into at least three full-length ones and I’m not going to do that. All I will do is say that one of them is drawn from the contemporary American philosopher, James C. Edwards' book "The Plain Sense of Things"; the second from the contemporary Canadian philosopher, J. L. Schellenberg’s recent book, “Evolutionary Religion”; and the third from the contemporary US/Brazilian philosopher and politician Roberto Mangabeira Unger’s books “Self Awakened: Pragmatism Unbound” and “The Religion of the Future.”

"It is not enough to innovate in our politics. We must also innovate in our basic ideas about who we are. Unless we innovate in these ideas as well as in the arrangements of society we cannot turn the message of our divinity into a real experience. And thus the need today for a spiritual revolution as well as for a social transformation."

You see it seems to me that as we continue to search for a way to create a relevant, contemporary religion — that, in particular, is able to take properly into account the results of the natural sciences — much of what passes for research and experimentation in our circles is simply treating (liberal) religion as the psychiatrist in Drury’s story treated the timid, alcoholic man. We are not doing any proper research before hand to develop new ideas, new concepts and new ways of looking at old and familiar facts and, instead, we simply tie liberal religion down, force carbon-dioxide down its throat and see what abreaction we get. Then, from this observation (filled to the brim with faulty preconceptions — for we resolutely refuse to leave our imaginations in the ante-room with our overcoats), we then go on to make spurious diagnoses about liberal religion’s failings that merely repeats what we already know simply in different terms and which sends us scurrying down yet another blind alley of reform.

If we genuinely want a religion appropriate to our own age and knowledge then we need to stop committing the fallacy of Moliére’s physician right now, to stop collecting facts and, instead, urgently consider the new ideas, new concepts, new ways of looking at old and familiar facts and new questions that are on offer thanks to people such Edwards, Schellenberg and Unger.

Inevitably, at the beginning of such a new courses of research, the first new ideas, new concepts and new ways of looking at old and familiar facts we initially bring to bear on the problem may well not be not very clear or well-defined but, as Bernard realised, that does not matter as much as we think it does. But one thing is clear to me and that is we should not allow ourselves to be intimidated into not starting this necessary task by allowing ourselves be deceived by the many continuing, loud, confident pronouncements of those people still forcing carbon-dioxide down liberal religion’s throats to trigger abreactions they feel able authoritatively to interpret. We need to be alert to that fact that their apparent authoritativeness and ability to give us new facts and answers are highly likely to be no more than that possessed by Moliére’s physician. Trust me, you wouldn't want him to be in charge  of your future health and well-being.

Bad Horse said…
I've just gone through a hundred hits on Google to the quote about dormative properties, attributed to Moliere, and not one of them says what play it was in.
4 June 2019 at 03:40

Andrew James Brown said…
Glad to have provided an end to your mammoth search. I'd certainly recommend seeing/reading it and, of course, Drury's book if you are minded. A brand new edition of it has just been published: