Given that the bank-holiday Monday was such a pleasant day I thought I'd take a slow and meditative ride out into the Cambridgeshire Fens. It's always good to have some point to aim for, even on a modest amble such as this, so I got out my maps and took a look at the possibilities. I noticed that on both the OS maps of 1898-1901 and 1919-1921 there was a Newgant Farm (see photo on the right three-quarters of the way up and just left of centre—click on the image to enlarge it) out in the middle of Swaffham Prior Fen but that on the most recent edition of the map that it was absent. I thought it would be worth riding to the spot to see if I could find any trace of it and then spin on to Upware for lunch and a cooling pint of shandy at the very aptly named "Five Miles From Anywhere No Hurry Inn."

As I often do when I go out into the fens I decided to take my old Raleigh Superbe. I'm sure this repeated decision has something to do with the fact that in one of my favourite books about the region by Olive Cook (simply called Cambridgeshire and bought by me some thirty years ago) there is an evocative photo (to me anyway) taken by the wonderful Edwin Smith of a woman cycling on a similar bicycle through the fens during a summer in the early 1950s (presumably the woman is Olive Cook herself who became Smith's wife in 1954—the book was published in 1953 by Black & Son). Given that this image was taken sometimes in the 1950s I thought it would be both fun and appropriate to use the digitised version of a 1950s Agfacolor film made by RNIFilms. The couple of black and white photos I have included in this post mimic either Ilford FP4 or FP5 (again thanks to RNIFilms) and I've included them as a little homage to Edwin Smith whose work silently, but very powerfully, encouraged me in my late teens and early twenties to try my own hand at taking black and white photographs. You can see some samples of Smith's photography at this link if you want to make a comparison with my own lesser efforts!

On the road I followed from the south to get to the site I discovered that there is in fact now another farm on a different site also called New Gant Farm but a quarter of a mile further on I finally came to the track leading to the old site. This track, still fairly clearly defined and solid, comes to an abrupt and clear stop in a now open field. After poking around for a bit in the dark black dry and peaty soil, I eventually came across a few broken bricks (including some Cambridgeshire white bricks—white gaults) that, given the lack of any other kind of building rubble around, seem likely to have come from the old farm buildings. I felt assured enough that I had found my farm and so began quietly and slowly to look around and take in the colours, smells and sounds of the modern fen landscape. By this time (about 12.45pm) it had become very hot and through the heat-haze now shimmering all around me not a sound could be heard, no planes, no cars, no people, no birds and no wind.

This unusual stillness belied a deeper truth of this landscape for in its earliest incarnation it would have been almost constantly alive with sounds both from abundant wild-fowl and from the almost-always rustling of countless acres of reeds. Then later, as the landscape was slowly transformed into farm land (thanks in particular to firstly Roman then Dutch engineers), there also came the almost unceasing sound of men and horses working to dig drainage ditches and build wind-pumps to send the dark fen waters many miles north into the Wash. This sound of human and animal work was then added to and eclipsed by the distinct sound of machines. This sound began to predominate particularly in the 1940s when due to the Second World War highly productive farmland became more desperately needed than ever before.

We are fortunate that there exists a silent black and white film at the East Anglian Film Archive called "Reclamation: 1941-1943" which shows the reclamation of part of Burwell Fen near Priory Farm which can be seen from the site of old Newgant Farm where I was standing. (Click on this link to watch). I mused that it was not beyond the bounds of possibility that someone from this farm can be seen in that film. But whether or not that is the case the film gives us a vivid picture of the landscape and life that would have been known to Newgant Farm's occupants. As you will see it was an extraordinarily hard life and the film stands as a powerful and poignant reminder that this absolutely still and flat landscape in which I was standing was unbelievably hard won and that, unlike this moment stopped in time, was one full of noise and movement. I also realised that standing, as I was, at zero-feet above sea-level it seems highly likely that global warming and an associated rise in sea-level will eventually (and perhaps sooner than we would like to think) begin to return this landscape to the condition it once knew in ancient times and that all the lives that once lived and worked upon this landscape, and indeed my own life and work (including this remembrance of times past), would be forgotten forever.

The chances are that the inhabitants of this now long-gone farm would have known their Bible well and, were they to be standing by me today in more than my imagination, would they have been tempted to join me in citing the opening verses of what, to my mind, is the wisest book it contains, Ecclesiastes?

The words of the Preacher, the son of David, king in Jerusalem. Vanity of vanities, says the Preacher, vanity of vanities! All is vanity. What does man gain by all the toil at which he toils under the sun? A generation goes, and a generation comes, but the earth remains forever. The sun rises, and the sun goes down, and hastens to the place where it rises. The wind blows to the south and goes around to the north; around and around goes the wind, and on its circuits the wind returns. All streams run to the sea, but the sea is not full; to the place where the streams flow, there they flow again. All things are full of weariness; a man cannot utter it; the eye is not satisfied with seeing, nor the ear filled with hearing. What has been is what will be, and what has been done is what will be done, and there is nothing new under the sun. Is there a thing of which it is said, “See, this is new”? It has been already in the ages before us. There is no remembrance of former things, nor will there be any remembrance of later things yet to be among those who come after.

Although this thought undoubtedly lent a melancholy, even elegiac air to the moment I should add that my thoughts did not at all depress me. I prefer, you see, to live in reality and to find ways to appreciate life as she is before, all around in among my being and the being of all things. It reminds me to carpe diem, to seize the day and, to paraphrase Henry David Thoreau I became acutely aware that

“I went into the fens because I wished to live deliberately, to front only the essential facts of life, and see if I could not learn what it had to teach, and not, when I came to die, discover that I had not lived. I did not wish to live what was not life, living is so dear; nor did I wish to practise resignation, unless it was quite necessary.”

So let me be clear, my thoughts did not cause me to practise resignation but to remount my bicycle genuinely grateful for the lives of the farmers, labourers, engineers (men and women alike), horses, pigs, cattle, fish, birds and eels who have made this place their home. What gifts they gave and still give and as reminder of all this I decided to pick up and take home a small fragment of brick from the farm to place upon my desk at which I am writing this post.

Buoyed-up by my concluding thoughts I peddled quietly on through the hot fens to Upware and, with my pint of cool shandy in hand amongst the happy holiday-makers at the pub by the river, I silently raised a grateful toast to the otherwise unremembered inhabitants (human, vegetable and animal) of old Newgant Farm on Swaffham Prior Fen.

Below you will find a few other photos taken on the ride. As usual they were taken with my iPhone 6+ and, as I noted above, using a digital emulation by RNIFilms of old 1950s Agfacolor film or more modern Ilford HP4 & 5 black and white film. Just click on a photo to enlarge it. 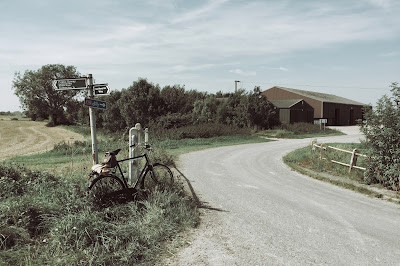 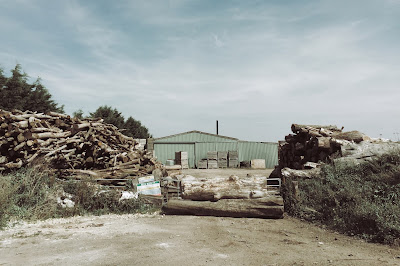 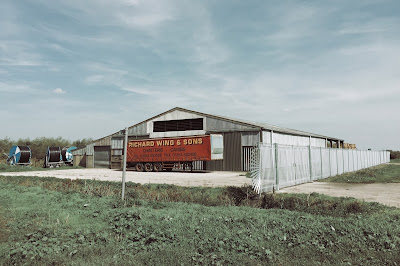 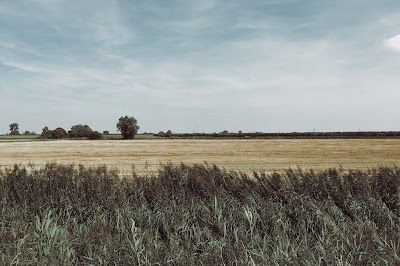 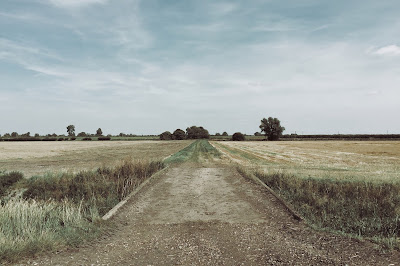 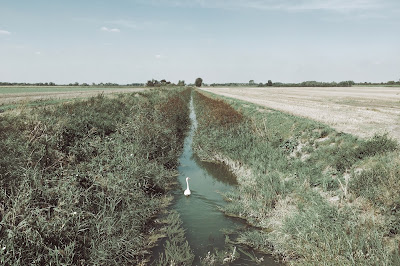 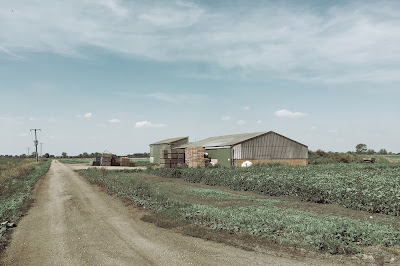 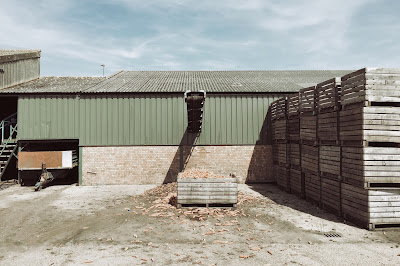 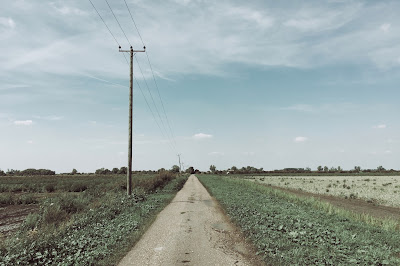 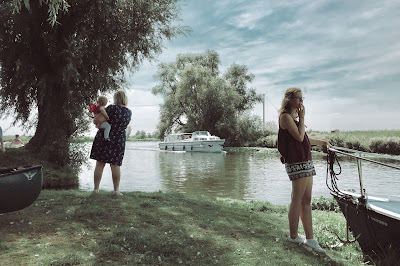 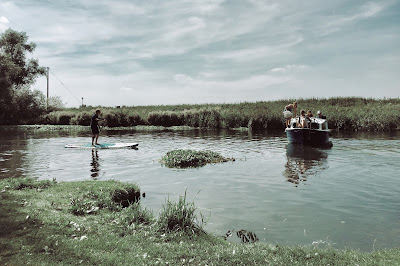 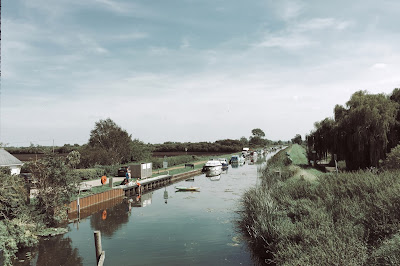 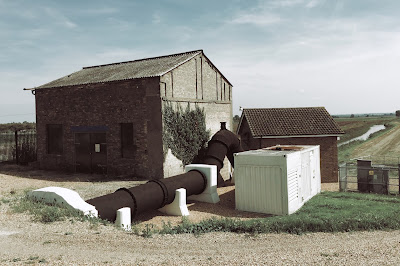 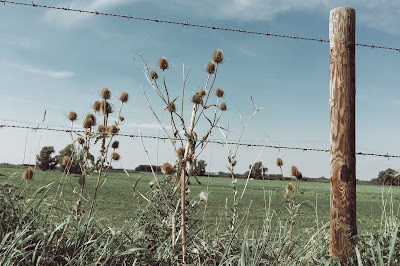 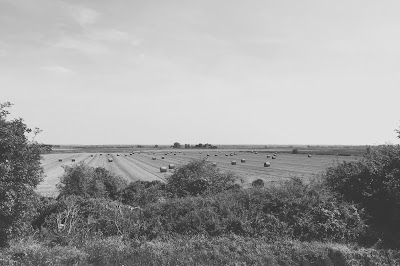 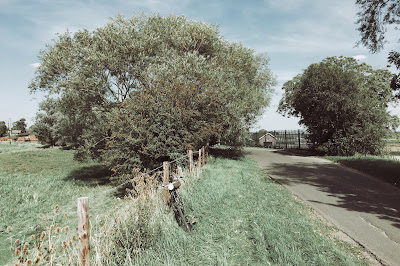 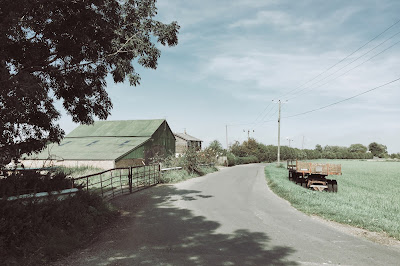 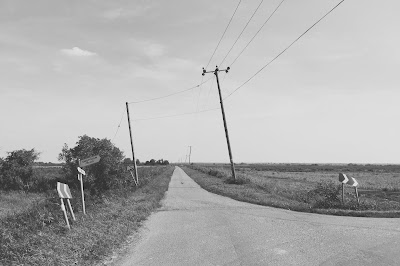 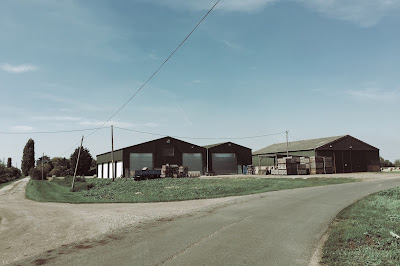 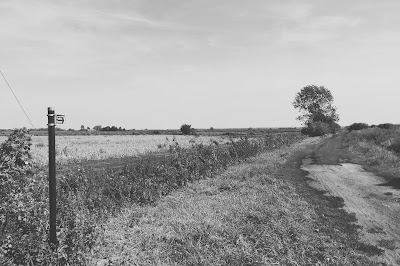 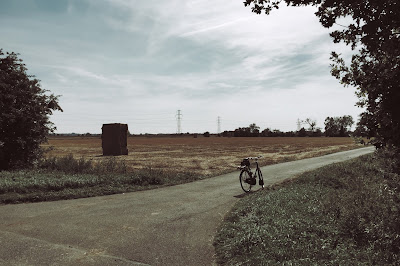