Jesús and the possibility and desirability of a post-COVID-19, Universal Basic Income/Dividend 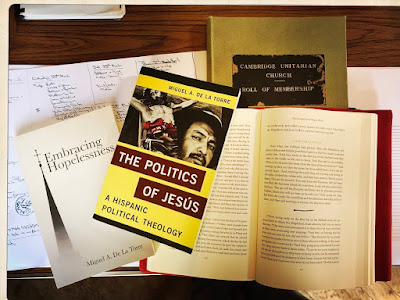 Jesús said: “For the kingdom of heaven is like a householder who went out early in the morning to hire labourers for his vineyard. After agreeing with the labourers for a denarius a day, he sent them into his vineyard. And going out about the third hour he saw others standing idle in the market place; and to them he said, ‘You go into the vineyard too, and whatever is right I will give you.’ So they went. Going out again about the sixth hour and the ninth hour, he did the same. And about the eleventh hour he went out and found others standing; and he said to them, ‘Why do you stand here idle all day?’ They said to him, ‘Because no one has hired us.’ He said to them, ‘You go into the vineyard too.’ And when evening came, the owner of the vineyard said to his steward, ‘Call the labourers and pay them their wages, beginning with the last, up to the first.’ And when those hired about the eleventh hour came, each of them received a denarius. Now when the first came, they thought they would receive more; but each of them also received a denarius. And on receiving it they grumbled at the householder, saying, ‘These last worked only one hour, and you have made them equal to us who have borne the burden of the day and the scorching heat.’ But he replied to one of them, ‘Friend, I am doing you no wrong; did you not agree with me for a denarius? Take what belongs to you, and go; I choose to give to this last as I give to you. Am I not allowed to do what I choose with what belongs to me? Or do you begrudge my generosity?’ So the last will be first, and the first last.”

ADDRESS
Jesús and the possibility and desirability of a post-COVID-19, Universal Basic Income/Dividend

As we reach the stage of the COVID-19 event in which there is an increasing amount of debate about how best to enable people SAFELY to return to work, the issue of mass unemployment also looms starkly before us. For many, many people there is likely to be no work to which, either safely or unsafely, they can easily or quickly return. This, in turn, has raised the urgent question of whether we must now be thinking hard about instituting some version of Universal Basic Income or Dividend (UBI/UBD). Those of you who know me know that I’ve long been an advocate of this idea, primarily under the form of a dividend which would be financed from the returns on all capital (wealth) and also from taking a percentage of companies’ profits, especially from those companies which commercialise technology developed from public funding.

However, as I say this, I’m fully aware that such statements uttered by ministers of religion like me, are always going to be perceived by some people as problematically confusing the domains of politics and economics with that of religion. But, as I have often noted to you, I make no apologies about personally identifying with a radical, Unitarian, Christian Socialist tradition which has always believed that religion (especially in the form practised by Jesús) is always-already tightly bound up with matters political and economic (cf. the Unitarian minister John Trevor (1855-1930) and the Labour Church, John Goodwyn Barmby (1820-1881) or John Lewis (1889-1976)). As our nineteenth century forebears memorably put it, in our churches we are called upon to ‘practise the religion OF Jesús not the religion ABOUT Jesús’ and the matter of how practising the religion of Jesús strongly suggests we should actively support some kind of UBI/UBD is seen clearly in the parable of labourers in the vineyard (Matthew 20:1-16). At the top of this post you will have read the translation of the parable from the Revised Standard Version so let’s now consider a contemporary recasting of it made by Miguel A. De La Torre, professor of social ethics and Latino/a studies at Iliff School of Theology (a graduate Methodist theological school), Denver, Colorado.

Early one morning, a certain factory (vineyard) owner sets out to hire additional laborers to build widgets in his plant. He drives his pickup truck to the local bodega [small Hispanic grocery store] where several laborers usually wait to be hired, negotiates a fair days wage, and he sends them to his factory. Several hours later, mid-morning, he comes across some individuals standing around the parking lot of the jon dipo (Home Depot), so he employs them too and sends them to build widgets in his factory. At noon, he finds more unemployed laborers in the parking lot of a justice-based church that, as part of their ministry, provides facilities for day laborers waiting to be hired. Again, in the mid and late afternoon, he finds some more laborers who were unable to find employment all day, so the factory owner sends them to his plant. When the workday came to an end, and it was time to pay the workers, the factory owner reversed the order and began to pay those who were hired last and worked only a few hours. He paid them the amount he originally agreed to pay those whom he first hired in the early morning. In fact, he paid everyone the same amount, a full day's wage. Some may have worked all day, some just a few hours, but every-one got the same amount of money.

When this parable is read within the paradigm of monetary fairness employed by capitalism, this story always presents something of a puzzle. De La Torre points out that it tends to make people who benefit from the capitalist paradigm ask a version of the following question:

‘Now honestly is this fair? Shouldn’t workers be paid according to the amount of time they invested in the job? Doesn’t time equal money? Is Jesus advocating an unfair wage structure?’

As a child who learnt my Christianity firmly within, not only this capitalist system, but also within that system’s own established Church (the Church of England) and an aspirant, white, working-class family that was, relatively speaking anyway, doing OK financially thanks to this economic system, the parable of labourers in the vineyard was always spiritualised and presented to me as a story about my soul being freely saved by God through faith and not works. As I was constantly reminded, the author of Ephesians said: ‘For by grace you have been saved through faith. And this is not your own doing; it is the gift of God’ (Eph 2:8). The ‘gift of God’ in question was, of course, ‘salvation’ (whatever that meant, and I was never entirely sure) and I was repeatedly taught that it was available to all who had faith. In doing this my local priest and Sunday School teachers performed a near miracle, namely, that of making the labouring aspect of the parable of the labourers in the vineyard all but disappear from view! The work didn’t matter, only faith mattered. Hmmm. It seemed nonsense then, it seems a dangerous nonsense now.

However, as De La Torre reminds us, ‘for Hispanics [and all other marginalised peoples of all kinds and colours] accustomed to standing at designated street corners throughout major cities of this country, waiting and hoping for a patron to stop and offer a job (off the books to avoid employment taxes)’, the kind of fairness expressed by Jesús in his parable is obviously present without any need to employ the justice distorting, spiritualising lens used by my own teachers.

The truth is that any person (or whole communities of people) who daily finds themselves in a situation where unemployment or minimum-wage, zero-hour contract service jobs are the norm, this parable offers ‘a vision for a just society based, not on neoliberal ethical principles, but on the mercies of God.’

Here is how De La Torre sums up this unspiritualised, practical, ethical reading of the parable:

‘What Jesús teaches in the parable of the factory (vineyard) owner is that earning only half a denarius meant that several family members would not eat that day. Only an uncaring or unmerciful heart would declare it just that these laborers leave without being able to meet their basic needs because, through no fault of their own, they were unable to find a job. Reading the Bible from the margins, the lesson is that those who are economically privileged, like the factory owner, must remain responsible for those who are not. For those who live under an economic system that commodifies workers’ time, justice is defined as a set pay for a set number of hours worked. Yet Jesús here defines justice as ensuring that each worker obtains a living wage, regardless of the hours worked, so that all can share in the abundant life. It did not matter how many hours a laborer worked, what mattered was that at the end of the day, she or he took home a living wage so that the entire family could survive for another day. The workers’ responsibility was to labor, and it was the employer’s responsibility to ensure that the employee left with enough. What does this say about our present system, where if a person works full-time at the minimum hourly wage, he or she will earn several thousand dollars below what the U.S. Government has determined to be the poverty level? Or what does it say about the rich who hoard their wealth while so many suffer poverty? 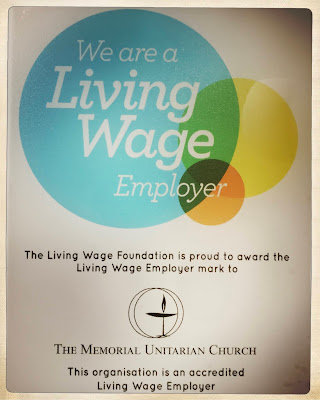 But what happens in an age of mass unemployment? Well, it seems we are to find out very soon because, as is plain as a pikestaff, in our own country (as has been true for ever elsewhere in the world) the COVID-19 event is likely to result in millions of labourers who, through absolutely no fault of their own, are suddenly unable to find any employment for the day, the week, the month and/or the year/s. They will be in exactly the position of the labourers spoken of in Jesus’ parable who were forced to get up before dawn to go to places where they might, just, if they were lucky, pick up a job. But the point is that, whether or not they get a job (in the morning, in the middle, or at the end of the day), they will still need a full day’s wage to meet their basic needs: food, shelter, clothing.

In his parable Jesús shows us an employer who has understood this truth and, when we don’t go all misty-eyed and spiritual about it that is, it’s a story that can help us begin see a completely different idea of in what can consist monetary/economic justice than the dreadful and destructive one that has been offered to us within capitalism. It’s a parable which shows us how it might be possible for all to find justice and abundance in this world rather than in some promised, other, future world that may (or, more likely, does not, nor ever will) exist.

Now that our government — which has always-already consisted mostly of the extremely economically privileged — has been forced to become the de facto employer of nearly a quarter of the British workforce, it is surely the right time to bring this parable to our politicians’ notice once again and to begin to put our shoulders firmly against wheel that is the growing demand for a UBI/UBD. Jesús wouldn’t expect us to do anything less.