For your dark delectation, a poem by the excellent Peter Jukes, soon to be illustrated by the equally excellent Guardian cartoonist, Martin Rowson. 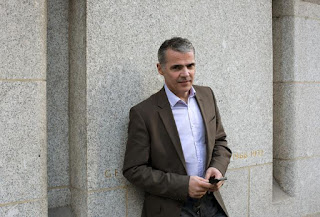 As the contest finally creaks
Into its last corrupted weeks,
So much is owed to the people who
Were robbed so often by so few.

Bombasts, blowhards, sound your horn,
Herald this disastrous dawn,
Moguls, oligarchs, raise a glass
As your chumps and champions pass.

In a bus, emblazoned in red,
Farage and Bannon at its head,
Inside he waits for Trump to tweet:
This is the triumph of deceit.

Piffle, kippers, dead cats, whey -
The land of Shakespeare blown away,
Famed for gravity and honour,
Led by a dunce to ruin and squalor.

Far away, in warmer water,
Kitts and Nevis, Cyprus, Malta
Lucre glitters, laughs and flies
Back to London where it buys...

Lawyers, bankers, spooks and hacks,
Shorting, leaking, legal attacks.
On the road to Downing Street,
All these frauds and chancers meet.

Stolen rubles, hedge fund debt
All double down on this last bet
To bribe, blackmail, and take power
In Britain’s most inglorious hour.

Churchill, Cromwell, pale with shame
Freeze with horror at his name.
Rooks are silent, lions mute,
At the vainglorious March of Loot.

Land of honour and fair play
Never saw a darker day.
As the doors of Number Ten
Close behind the hollow men
Who whistled up the dogs of race
And brought a nation to disgrace.