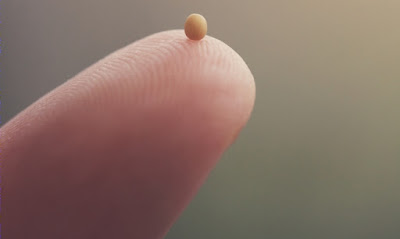 A podcast of this address can be read at this link

[Jesus] set another parable before them saying: “The Kingdom of the heavens is like a mustard seed that a man took and sowed in his field, which is indeed the smallest of all seeds, but when it grows it is larger than garden herbs and becomes a tree, so that the birds of the sky come and dwell in its branches.”

The Kingdom of God is mustard

to get lost among others

to shelter birds in its shade.

In our own age, when it comes to the parable of the mustard seed, we find it very hard avoid the traditional interpretation that has become attached to it. We’re tempted to say straightaway that it’s obvious, it’s a simple lesson we can read off the face of nature about growth — namely, that things which will eventually become large and expansive begin with something very small and compact.

Of course, it is sometimes true that small things do become large and, in the case of mustard seeds, they do, indeed, become large plants and, whilst calling them tree-like is a stretch for even the most imaginative of us, they do grow to a height of three or four feet. Jesus must surely have had this in mind when he told his parable. But was that all he had in mind?

To answer this question let’s first do a little bit of what the contemporary Slovenian philosopher and all-round bête-noir, Slavoj Žižek, calls ‘short-circuiting.’ Žižek notes that:

‘ . . . one of the most effective critical procedures [is] to cross wires that do not usually touch: to take a major classic (text, author, notion) and read it in a short circuiting way, through the lens of a “minor” author, text or conceptual apparatus (“minor” should be understood here in Deluze’s sense: not of “lesser quality”, but marginalized, disavowed by the hegemonic ideology, or dealing with a “lower”, less dignified topic). If the “minor” reference is well chosen, such a procedure can lead to insights which completely shatter and undermine our common perceptions’ (‘The Monstrosity of Christ’, Slavoj Žižek and John Millbank, MIT, 2009, pp. vii-viii).

Žižek thinks that sometimes this process doesn’t simply bring to light something new in the text or tradition, but it can also serve to make us ‘aware of another — disturbing — side of something [we] knew all the time’ (ibid. p. viii).

A fine example of the art of short-circuiting in connection with the parable of the mustard seed is offered to us by John Dominic Crossan whose translation of the parable you have already heard. The first ‘minor’ author Crossan uses as a lens through which to look at Jesus’ parable is the Roman author, naturalist, natural philosopher, naval and army commander of the early Roman Empire, Pliny the Elder (23–79 AD). Crossan reminds us that Pliny wrote:

‘Mustard ... with its pungent taste and fiery effect is extremely beneficial for the health. It grows entirely wild, though it is improved by being transplanted: but on the other hand when it has once been sown it is scarcely possible to get the place free of it, as the seed when it falls germinates at once’ (Natural History: 19.170-171).

The second ‘minor’ author, or rather authors, Crossan uses as a lens though which to look, are those who, redacted the Mishnah in early third-century CE, a text which later on came to form part of the Talmud. In the Mishnah the authors tell us that, because of its tendency to run wild, the planting of mustard seed in a garden was forbidden in Jewish Palestine (Mishnah Kilayim 3:2). There is a very high degree of probability that Jesus would have been aware of this teaching and, given this, Crossan feels, along with the historian of first-century Palestine, Douglas Oakman, that: ‘It is hard to escape the conclusion that Jesus deliberately likens the rule of God to a weed.’ Crossan, continuing to look through these lenses concludes that the point of Jesus’ parable:

‘. . . is not just that the mustard plant starts as a proverbially small seed and grows into a shrub of three or four feet, or even higher, it is that it tends to take over where it is not wanted, that it tends to get out of control, and that it tends to attract birds within cultivated areas where they are not particularly desired. And that, said Jesus, was what the Kingdom was like: not like the mighty cedar of Lebanon and not quite like a common weed, but like a pungent shrub with dangerous takeover qualities. Something you would want only in small and carefully controlled doses — if you could control it’ (John Dominic Crossan, ‘Jesus — A Revolutionary Biography’, Harper San Francisco 1994, pp. 64-66).

Well, well, well. As Žižek noted thought can make us ‘aware of another — disturbing — side of something [we] knew all the time’.

It’s something we can most easily see through the lens of an old gag I am, perhaps, overly fond of telling, namely, that although Jesus promised us the kingdom of God (or the kingdom of the heavens), what we actually got was the Christian Church. Given this perhaps we should be asking ourselves whether Jesus might have planted the wrong seed by mistake? He may have thought he was planting a seed that would  grow into a flourishing, peaceable kingdom but what actually grew was an institution with very dangerous takeover qualities indeed, and one which quickly got wildly out of hand. The Christian Church became an institution which, as it grew ever larger and became the religion of empire, began to bring with it terrible consequences as it provided branches in which too many people who desired imperial, kingly or purely personal power and oversight could settle and who were filled with an insatiable appetite for swooping down upon the common land and the common people to inflict upon them two millennia of violence, corruption, crusades, inquisitions and much more besides.

This is neither a pleasant historical memory nor thought and it may seem the best we can say in Jesus’ favour was that the Christian Church was simply not the fruit of the seed he sowed two millennia ago and that the tiny mustard seed of the kingdom of the heavens Jesus actually planted was stillborn and never able properly to germinate and flourish as he had hoped it would. Perhaps, perhaps not.

But what happens if we bring Crossan’s short-circuited meaning of Jesus’ parable into our own age and ask whether it speaks to any thing around us today?

Well, it seems to me not unreasonable to suggest that Greta Thunberg and her many fellow young climate activists may stand as a classic examples of mustard seeds growing in just the fashion understood by Jesus in first-century Jewish Palestine. In August 2018 outside the Swedish Parliament Thunberg began, completely alone, a ‘School strike for climate’. An action in which only two years later, and even now during lockdown, she is regularly being joined by huge numbers of students across the globe.

Again and again over the last couple of years it has struck me that the School Strike for Climate movement may well make for a better candidate for being a genuine fruit of Jesus’ mustard seed than the historic Christian Church ever was.

To see what I mean and to conclude this piece, let me walk through Crossan’s conclusion again with this thought in mind.

It’s not just that our children start out as proverbially small and grow into creatures only a couple of feet higher than mustard plants, it is that they, too, tend take over where we stick-in-the-mud, stubborn and frankly short-sighted adults often don’t want them, they tend to get out of our control and their hearts and minds, like the branches of the mustard plant, tend to attract new and swift-winged, scientifically informed ideas within areas of our lives which we adults have populated with often problematic, destructive, out-dated and outmoded ideas and practices. Of course, we adults don’t desire this kind of thing to happen because it brings with it a serious challenge to our old ways of being-in-the-world, not least of all to our selfish and excessive consumption and waste, meat-eating, fossil fuel, car and aeroplane use which are clearly destroying the basic ecosystem upon which all life on this planet depends.

It seems to me that our children’s involvement in these School Strikes for Climate is very similar to what Jesus said the mustard seed growing into the kingdom would be like: not like the mighty cedar of Lebanon and not quite like a common weed, but like a pungent shrub with dangerous takeover qualities — dangerous, of course, but only to our old ways of being which we all know we must urgently change.