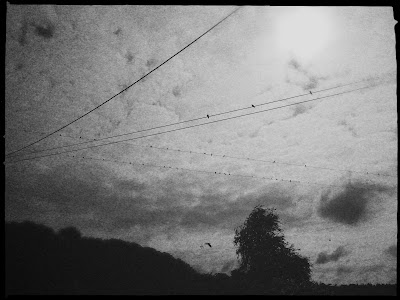 Most of us grew up within a world-view that taught we were beings with distinct and definite limits. So, as I talk to you now, I was taught to view you as a being with distinct and definite limits and you were taught to view me in a similar fashion. You are definitively there, and I am definitively here . . . or so it once seemed.

But, as the philosopher Thomas Nail asks in a recent essay, what happens when “we are trying to talk about something without definite limits or a fully positive presence?”

What kind of thing is Nail talking about? Well, he points to the example of “a swallow swooping after a bug through the sky” and when we start to talk of things like this we quickly realise we need to use words such as “process” or “becoming.” As Nail notes, a process is something that “is neither fully present nor fully absent.”

As we begin to pay closer attention to this indeterminate, intra-active process that is neither fully present nor fully absent, we start to realise that without the bug, the swallow would starve to death and without the air the swallow could not fly. The swallow, when viewed thus, is suddenly no longer a being “with distinct and definite limits” but something that is neither fully present nor fully absent and we also begin to see that the matter of the swallow is the matter of the bug and of the air.

Of course, the same is true of the air — just think about all the organic and inorganic processes that are required for our planet’s atmosphere to have come about.

As I hope you can see, in this world-view, the swallow, the bug, plant life and the air and you and me have all ceased to be beings “with distinct and definite limits” and, instead, everything now shows up to us as intra-active, indeterminate process in which we are all the matter of the other. As the poet Arthur Rimbaud (1854-1891) once famously observed, “Je est un autre”, I am an other or, perhaps, I is always someone (or something) else.

Many things follow for those who begin fully to live according to this world-view but I want to leave you today with a single, modest, but uplifting one offered by the Shin Buddhist minister, Seigen Yamaoka: