A meditation on a Pietà, written for a Mothering Sunday during a time of war

In Christian art, any image that depicts Mary cradling her executed son, Jesus, after his dead body was removed from the cross, is today known as a “Pietà”, which simply means “pity” or “compassion.”

But, of course, the title, “Pietà” can be applied to any such depiction because it is a universal, humanist image that speaks to all people regardless of their religion or philosophy of life.

It goes without saying that every hour of every day a Pietà is being enacted in the flesh somewhere in the world and, in a time of war it is, alas, being enacted minute by brutal minute.

Despite it’s universal quality, I want briefly to return to the specific Christian form of the Pietà, namely to Jesus and his mother Mary.

Some of you may recall that towards the end of John’s Gospel (19:25-27), while Jesus is still alive upon the cross, we are told that beside him were standing his mother Mary, his mother’s sister, Mary the wife of Clopas, and Mary the Magdalene. Also standing there is the mysterious figure known as the “the disciple whom he loved” who is mentioned in five other places in John’s Gospel. Since the late, first century this figure has often been identified with John the Evangelist, the traditional author of the Gospel of John. But the truth is we simply do not know to whom the phrase refers and, in my own reading of this Gospel, I have generally taken the disciple to be a kind of “everyman” figure who stands for all of us who, in many faltering and imperfect ways, continue to try to follow Jesus’ basic teaching.

The gospel then tells us that:

Immediately following this incident, Jesus says he is thirsty and so those gathered about him raise a sponge soaked in wine up to his mouth. And then, having taken the wine, he says:

“‘It has been completed.’ And lowering his head he delivered up his spirit” (John 19:30, trans. David Bentley Hart).

Sometime shortly after this Jesus is taken down from the cross and this would have been the moment when his mother Mary first cradled the dead body of her executed son.

There are so many things one might say about this distressing scene but I want us to see something about it that is often missed.

However, Jesus’ words upon the cross are clearly intended to give Mary a new son, and the beloved disciple a new mother and family to take as his own.

Without diminishing the pain and the grief experienced in every individual, particular moment of death and separation, and especially when this moment is so brutal and violent, what I take Jesus to be pointing to in this completion of his teaching, is the underlying truth that we all belong to one, universal human family — in some way we are all to understand ourselves as being parents and children to, and of, each other. Jesus’ last teaching in the Gospel of John is another expression of his hope, found most fully expressed in Chapter 17, that we will “all be brought to completion in one” (John 17:22-23) and, in our own culture, the face of that one has often borne the face of Jesus’ mother, Mary. 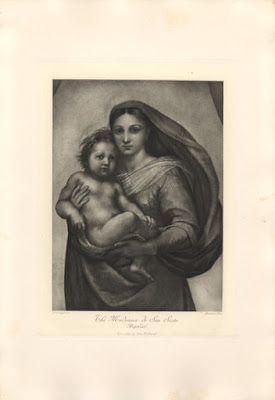 But as I noted earlier, this is not a Christian image alone but an archetypal one as available to the atheist as it is to the religious. Consequently, it should come as no surprise that a pre-eminent icon of Auguste Comte’s secular “Church of Humanity,”  (see HERE & HERE & HERE) and the humanist movement in general, has been Mary — especially in reproductions of The Sistine Madonna, also called the Madonna di San Sisto, by the Italian artist Raphael (see engraving on the right).

And so, on a Mothering Sunday in the midst of a new war in Europe, regardless of our own individual religious beliefs and philosophies, and painfully aware of the thousands of mothers cradling their dead children right at this moment, I hope we may today look upon this Pietà carved and gifted to us by Celia [James] for our Memorial Garden (see photo at the head of this page), and know, deep in our bones, that despite what the warmongers and nationalists claim, we always-already all belong to one universal family.