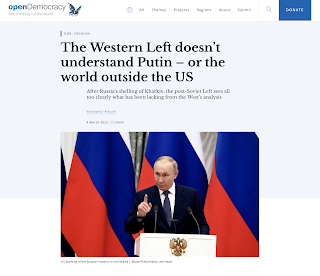 I have just read through what seems to me to be a very important article by Volodymyr Artiukh for Open Democracy called “The Western Left doesn’t understand Putin – or the world outside the US”:

As someone from the Western Left I take what Artiukh says very seriously indeed and I ask you to do likewise.

A friend of mine wrote to me yesterday asking me what I thought about this article and, for what it is worth, I paste below a few sections from my reply:

As you know, I've been involved in left politics all my life in one way or another, and Artiukh's words resonate very strongly with me because many of my British comrades also cannot seem to move beyond only blaming the US and NATO for everything that's going on in the Ukraine. It is now clearer than ever that, although there were huge failures in the way the US & NATO did things post-1989 which have set some of the ground for the creation of the current situation, there also needs to be a clear recognition, critical analysis and condemnation of Putin et. al's own form of extremely violent and fantastical imperialism.

In certain Western left circles this failure (which has often been an ideological refusal) to recognise the wider, more complex picture (which has, for obvious reasons, been better seen and understood by East European/post-Soviet-Russian leftists like Artiukh [the author of the article above]) is resulting in the false and, frankly, bizarre and disturbing claim that what Putin is saying/doing about the Ukraine is true/correct — or at least more true/correct — than what is being said/done by Ukrainians, the US and NATO countries.

All the above (and more besides) lies behind the current fracas that is going on here in the UK with the “Stop the War Coalition” which has fallen prey to believing that the primary blame for the current war is the US & NATO alone. By failing to see the wider picture, the “Stop the War Coalition” have been duped into playing Putin's longer-term game — or so it seems to many of us on the left who have been paying (or are at last beginning to pay) attention to our Eastern European/post-Soviet-Russian comrades.