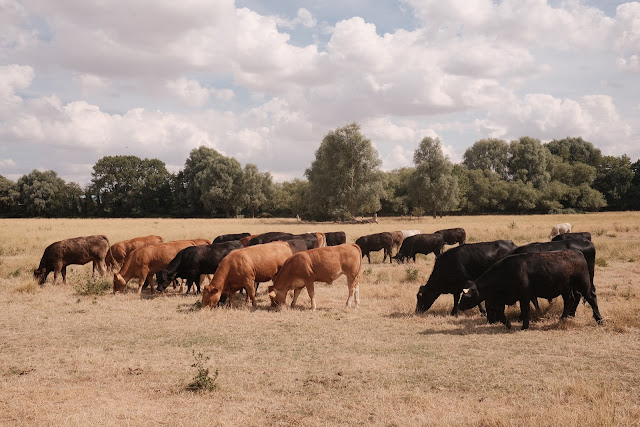 Taken with a Fujifilm X100V
Just click on the photo to enlarge it
One of the joys of living in Cambridge is being able to walk it’s many large green spaces, four of which — Coe Fen, Midsummer Common, Stourbridge Common and Ditton Meadows — regularly have cattle grazing upon them. Stourbridge Common, where this photo was taken only a couple of days ago, usually looks very green, and very English, but, right at this moment, after this month’s record-breaking temperatures and low rainfall, the scene reminded me (green Willows aside) more of the scenes of cattle grazing one can see in many a classic US Western. This feeling was undoubtedly only added to by the fact that I was shooting with a lovely jpeg recipe by Justin Gould called “Kodak Portra 66.” As Gould says:
“Some things seem to be made to go together, and in our world of film simulations and recipes, it’s Kodak Portra and fading Americana. Think of an abandoned gas station on a dusty desert highway. Creamy tones and washed-out colours give a nostalgic feel. It’s the retro look of a trip along Route 66.”
Although this photo may not have been taken from Route 66 and no abandoned gas stations can be seen, the track across it was very dusty and, just behind me, runs Route 51 . . . National Cycle Route 51.
Email Post
Labels: Cambridge cattle Fuji X100V Justin Gould Kodak Portra 66 Stourbridge Common Wednesday Photo
Andrew James Brown
My name is Andrew James Brown. I’m a philosophically/theologically inclined writer with sympathies towards Shin’ichirō Imaoka’s understanding of free religion (自由宗教), Christian atheism, D. G. Leahy’s “thinking now occurring for the first time”, a Lucretian inspired religious naturalism, new materialism and Kyoto School philosophy; also a photographer, cyclist, walker and jazz bass player. In addition to this, I’m the minister of a small, liberal, free religious community in Cambridge (UK)