A few thoughts offered before a Carol Service 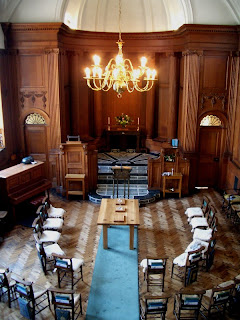 In the face of such difficulties and challenges the quite natural tendency is to retreat into a merely sentimental celebration of the season. Given this it is worth remembering the words of the philosopher Roger Scruton that I used on Remembrance Sunday. In his new book, "Culture Counts - Faith and feeling in a world besieged" you will remember that he observes:

Sentimentality . . . is habit-forming. And those to whom it appeals are frequently unaware of its principal characteristic, which is that it is a pretence. Sentimental words and gestures are forms of play-acting: pretending to noble emotions while in fact being motivated in another way. Thus real grief focuses on the object, the person lost and mourned for, while sentimental grief focuses on the subject, the person who grieves, and whose principal concern is to show his fine feelings to the world. Hence, it is a mark of sentimentality that the object becomes hazy, idealised, observed with no real concern for the truth.

During this season, however, we are not talking about grief but joy, indeed joy to the world. But just as grief is capable of being sentimentalised so to is joy and the result is the same; a sentimental Christmas concentrates on the subject, namely us, and its object "becomes hazy, idealised, observed with no real concern for the truth."

So the antidote to this is clearly to refocus on the object of the season and no matter what your theological perspective this can be nothing other than the birth of one particular child, Jesus of Nazareth, in whom we feel we can say, as did the three Persians in Gibran's story (see below) "The child is not but a day old, yet we have seen the light of our God in His eyes and the smile of our God upon His mouth. We bid you protect Him that He may protect you all."

And in the person and story of Jesus we encounter the great paradoxes of spirituality and religion namely how we can know and understand God as both Transcendent and Immanent. On the one hand we conceive God to be wholly other, beyond all real human knowledge, whilst on the other hand we know that God can be experienced as companion and friend. Any religion that stresses one side to the exclusion of the other is in danger of being, in the case of the former, too intellectual, cold and abstract and, in the case of the latter, too emotional, overheated and literalistic.

Put simply Christmas is a time to practise our real and imaginative encounter with this paradox of transcendence and immanence. No one answer and response to the Christmas story can do the job - how could it and why should it? And wisely it has been noted that things die when they become nailed and fixed - the allusion being again to Jesus, but this time to the end of his life. So here, in this liberal religious community, let us try to celebrate fully the fecundity of the Christmas story. May each of us find ways to live it well in this season of peace and goodwill to all.

From Jesus, Son of Man by Kahlil Gibran:

Jesus the son of my daughter, was born here in Nazareth in the month of January. And the night that Jesus was born we were visited by men from the East. They were Persians who came to Esdraelon with the caravans of the Midianites on their way to Egypt. And because they did not find rooms at the inn they sought shelter in our house.

And I welcomed them and I said, “My daughter has given birth to a son this night. Surely you will forgive me if I do not serve you as it behoves a hostess.” Then they thanked me for giving them shelter. And after they had supped they said to me: “We would see the new-born.”
Now the Son of Mary was beautiful to behold, and she too was comely.

And when the Persians beheld Mary and her babe, they took gold and silver from their bags, and myrrh and frankincense, and laid them all at the feet of the child. Then they fell down and prayed in a strange tongue which we did not understand. And when I led them to the bedchamber prepared for them they walked as if they were in awe at what they had seen. When morning was come they left us and followed the road to Egypt.

But at parting they spoke to me and said, “The child is not but a day old, yet we have seen the light of our God in His eyes and the smile of our God upon His mouth. We bid you protect Him that He may protect you all.” And so saying, they mounted their camels and we saw them no more.

Now Mary seemed not so much joyous in her first-born, as full of wonder and surprise. She would look upon her babe, and then turn her face to the window and gaze far away into the sky as if she saw visions. And there were valleys between her heart and mine.

And the child grew in body and in spirit, and He was different from other children. He was aloof and hard to govern, and I could not lay my hand upon Him. But He was beloved by everyone in Nazareth, and in my heart I knew why.

Oftentimes He would take away our food to give to the passer-by. And He would give other children the sweetmeat I had given Him, before He had tasted it with His own mouth. He would climb the trees of my orchard to get the fruits, but never to eat them Himself. And He would race with other boys, and sometimes, because He was swifter of foot, He would delay so that they might pass the stake ere He should reach it.

And sometimes when I led Him to His bed He would say, “Tell my mother and the others that only my body will sleep. My mind will be with them till their mind come to my morning.” And many other wondrous words He said when He was a boy, but I am too old to remember. Now they tell me I shall see Him no more. But how shall I believe what they say?

I still hear His laughter, and the sound of His running about my house. And whenever I kiss the cheek of my daughter His fragrance returns to my heart, and His body seems to fill my arms.

But is it not passing strange that my daughter does not speak of her first-born to me? Sometimes it seems that my longing for Him is greater than hers. She stands as firm before the day as if she were a bronzen image, while my heart melts and runs into streams. Perhaps she knows what I do not know. Would that she might tell me also.
Email Post
Andrew James Brown
My name is Andrew James Brown. I’m a philosophically/theologically inclined writer with sympathies towards Christian atheism, D. G. Leahy’s “thinking now occurring for the first time”, a Lucretian inspired religious naturalism, new materialism and Kyoto School philosophy; also a photographer, cyclist, walker and jazz bass player. In addition to this, I’m the minister of a small, liberal-religious, free-thinking community in Cambridge (UK)