The nativity as koan 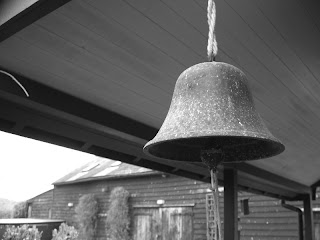 During Advent I have, as usual, tried various ways to encourage us deeply to engage as modern people with the Christmas story. In our own time it remains, I think, very difficult to know how best to do this - especially if you refuse, as I do, to leave my head at the door of the church and have no wish to be forced to believe three impossible things before breakfast. It is difficult because we know that in key respects how we view the world is radically different from the way Jesus' and his own parents viewed the world. Previous sermons have tried to explore some of the ramifications of this.

But in at least one key respect we are no different from our forebears, namely we remain human-beings who, in experiencing the world, must also then go on to reflect upon its meaning with the best tools we have to hand. (Hang on to the word "tools" for it is going to become important.) It is a truth enshrined in the Gospels themselves and I am particularly fond of that verse found in the Gospel according to Luke in which Mary, after the angel's visitation and after giving birth to Jesus "kept all these things, pondering them in her heart" (Matt. 2:19).

So here we are then, come ourselves this happy morn to pay homage to the Christ-child once more to ponder these things. Perhaps in earlier years I might at this point have tried further to unravel what this season might mean but not today and I don't think ever again - at least not on Christmas day itself.

I have been searching for a good way to express this is the case and I have been particularly helped in this by the writings of a philosopher called Paul Wienpahl. In a lecture entitled "An Unorthodox Lecture" given in 1956 Wienpahl wrote:

I have grown tired of thinking and the rational. This is not to say that thinking and the rational can be found to be unimportant. It is rather to say that something else slips in. I feel the need for control, and, hence, for the rational and reasonable, as strongly as ever. But from investigation I have gone to reflection,- from the river to the pool, from the clear and clean to the turgid and opaque. The way is not easy and perhaps I should not have selected it for myself. [. . .] Words and ideas are tools. My life, and it may be, the life of any intellectual is troubled because of living only with the tools - and without using them. I am like the miser who forgets what money is for, and has only the money [See note 1 below].

I am increasingly realising how easy it is to only live with intellectual tools and then to be painfully lax in using them myself - really using them that is. Wienpahl has also helped me understand why I personally have not been to keen to use the tools of my trade. He said:

I find it hard to relax and admit that there is something else than knowledge. For it gives my friends the chance to say that I am becoming mystic. And what I don't like about this is that it seems to say that I disparage knowledge. I don't. I simply now see that knowledge is not everything. And this seems so obvious a thing to see that one wonders why it should be remarked.

When you have to give a sermon each week - clearly a product of intellectual tools and itself, then, only a tool - it is very hard to relax and admit confidently that knowledge is, indeed, not everything. I am finding this easier to see this now and even occasionally to admit it. But it is not easy and it leaves me, a minister and a teacher, - though always I hope very much as a student and student myself - a problem. It is a perennial problem. For example when the Buddha became enlightened under the bodhi tree he realised - though words cannot do this realisation justice - that all sentient beings lack nothing and are, and always have been, complete and, therefore, perfect. The problem he faced, I and we face, is that if that which we seek is already ours then teaching/learning this becomes quite difficult! What I have been grappling with over the last year and trying to articulate is a version of this insight drawn from our own Judaeo-Christian heritage (particularly Hans Denck and Sebastian Franck) and distilled through Spinoza's philosophy. It is summed up in Jesus' teaching that I have uttered many times during this last year - "the Kingdom of Heaven is within or among us."

But, as I have just noted, in the end all the knowledge in the world doesn't help us understand and experience this, we have to experience it directly. In Zen Buddhism there exists one method which can help us out of this dilemma and it is called the koan. Here is what Heinrich Domoulin the Jesuit scholar of Zen says about them:

Literally the word 'koan' (Chin., kung-an) is a combination of graphs that signifies "public notice" or "public announcement." A koan, therefore, presents a challenge and an invitation to take seriously what has been announced, to ponder it and respond to it. But the special character of this "announcement" confronts the listener or reader with a perplexing puzzle. One becomes confused, and the more one tries to come up with an answer and search for a solution, the more confused one gets. The essence of the koan is to be rationally unresolvable and thus point to what is "arational" The koan urges us to abandon our rational thought structures and step beyond our usual state of consciousness in order to press into new and unknown dimensions. This is the common purpose of all koan no matter how much they may differ in content or literary form (From The Song Period: A Time of Maturation by Heinrich Dumoulin in Sitting with Koans ed. John Daido Loori (Boston 2006: Wisdom Publications p. 17).

The more and more I think about it the more and more convinced I am that the Gospels are filled with koan (or koan-like elements) and the nativity story is one of the best known. It will never be resolved logically. It will never be resolved historically. It will never be resolved scientifically. It will never even be resolved poetically (even though it is the poets - and I would add musicians - who come closest to achieving this). Like Mary we can only ponder on it again and again and yet again. One day, if we are disciplined enough about contemplating its paradoxical and unresolvable nature - paradoxical and unresolvable at the level of language and rational thought that is - will force you to see through to a unifying Divine reality in which all paradoxes dissolve. As the Zen Master John Daido Loori succinctly puts it, "The answer to a koan is not a fixed piece of information. It is one's own intimate and direct experience of the universe and its infinite facets. It is a state of consciousness" (From "Introduction", ibid p. 1).

Merry Christmas to you all.

-o0o-
Note 1. The quotations from Paul Wienpahl are taken from MANAS VOLUME IX, NO. 24 JUNE 13, 1956 "AN UNORTHODOX LECTURE" The whole article is available at:

The editors state that "It is an abridgement of an All-University Lecture delivered by Dr. Paul Wienpahl, professor of philosophy at the University of California in Santa Barbara. As Damon Runyon used to say, “a story also goes with this.” Reactions to Dr. Wienpahl's lecture were extreme—ranging all the way from the worried suggestion by two colleagues that Dr. Wienpahl see a psychiatrist, to a demand for copies from enthusiastic students. In publishing this version of the lecture MANAS editors hope that readers will be pleased to learn that self-questioning does sometimes occur within ivied halls, and will be stimulated by these unprofessional questions."
Email Post
Andrew James Brown
My name is Andrew James Brown. I’m a philosophically/theologically inclined writer with sympathies towards Christian atheism, D. G. Leahy’s “thinking now occurring for the first time”, a Lucretian inspired religious naturalism, new materialism and Kyoto School philosophy; also a photographer, cyclist, walker and jazz bass player. In addition to this, I’m the minister of a small, liberal-religious, free-thinking community in Cambridge (UK)