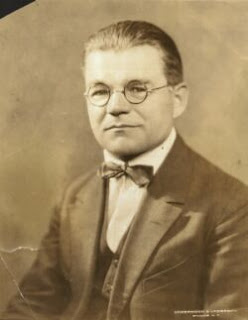 When teaching the history of Jewish-Christian relations, as I do from time to time, one of the many issues that inevitably has to be addressed is that of the Holocaust or, as it is often called within Jewish circles, the Shoah (שואה) meaning "calamity".

The Jewish philsopher and Reform rabbi Emil Fackenheim (1916-2003) famously stated that the Shoah gave rise to a new commandement - the 614th - that it was incumbant upon Jews to survive as Jews in order that Hitler was not provided with a postumous victory. He wrote:

We Jews are, first, commanded to survive as Jews, lest the Jewish people perish. We are commanded, second, to remember in our very guts and bones the martyrs of the holocaust, lest their memory perish. We are forbidden, thirdly, to deny or despair of God, however much we may have to contend with Him or with belief in Him, lest Judaism perish. We are forbidden, finally, to despair of the world as the place which is to become the kingdom of God lest we help make it a meaningless place in which God is dead or irrelevant and everything is permitted. To abandon any of these imperatives, in response to Hitler's victory at Auschwitz, would be to hand him yet other posthumous victories (E. Fackenheim, "Transcendence in contemporary culture: philosophical reflections and a Jewish theology" in H.W. Richardson & D.R. Cutler Boston (eds.), Transcendence (Beacon, 1969), p. 150).

Although this claim remains somewhat controversial in Jewish cirlces, I think that Fackenheim's words contain an important insight that can be applied more widely than to just the Jewish community. However, before I move to that we must address a clearly problematic aspect to allowing the Shoah to become such a central element of one's religious and community identity. Edward Kessler, the director of the Woolf Institute, puts it as follows:

There is a danger that by focusing solely on the Shoah Jews and Christians will gain a distorted view. For example, a young Jew will construct a negative Jewish identity, which without the positive side of Judaism, will not be a value to be handed down over the generations. A young Christian will come away with an exclusive picture of the Jew as a victim, without an awareness of the positive aspects of Jewish culture. If the Jew disappears from the horizons from the end of the biblical period and only appears again in 1933, where is the Jew and what is Jewish-Christian relations? (Jewish Christian Relations - The Next Generation CJCR 1999, p. 4).

Additionally it is important to recall that, although the Jewish people clearly bore the brunt of the Nazis unimaginable brutality members of other groups were also persecuted and murdered. These include around half a million Roma and Sinti (French Manouches, mostly found in France, Alsace, and Germany - often traveling showmen and circus people), the deaths of several million Soviet prisoners of war, along with slave laborers, gay men, Jehovah's Witnesses, the disabled, and thousands of political opponents. As many of you will know one of our own communities of faith found themselves caught up in this Shoah, this calamity: the Religious Society of Czech Unitarians (RSCU).

Unsurprisingly the RSCU's liberal theology was not highly regarded by the Nazis and it is clear that they had prepared plans finally to close the church but fortunately for them the war ended before they could see them through. Although this turn of events meant that their congregations and buildings as a whole survived the war, a number of leading figures in the movement were killed, the most notable being their founder Norbert Fabien Čapek. After being arrested on 28th March 1941 he was tried and, in June 1942, ordered to Dachau by the Prague Gestapo. He died on October 12 of the same year at Hartheim Castle, near Linz, Austria, during one of the Nazi’s infamous ‘medical tests’. Leadership of the movement passed to his son-in-law, Dr. Haspl.

Alas the allied victory did not, for those in the East of Europe, spell the end of their problems for, as we know only too well, various Communist regimes came to power. This further downturn brought with it a renewed and extended period of religious and social repression which continued to curtail many religious and cultural activities. For example these regimes did not, for the most part, allow churches to organize any youth meetings such as Sunday schools and, whilst worship for adults was often permitted, many people were simply too frightened to attend services because this could result in serious consequences, such as the loss of employment. Inevitably this impacted upon many communities desire and ability to congregate and worship freely and so nourish and pass on its faith.

In common with other groups for the RSCU this resulted in a steep decline in the commitment to, and knowledge of, Czech Unitarianism and they were, as a whole, thoroughly demoralised. No longer having a confident sense of identity, it was inevitable that other influences would come into Czech Unitarianism - where ever there is a vacuum make no mistake it will be filled. After Dr. Haspl’s death many of these influences were post-modern and eastern influenced 'new-age’ ideas (in common with some other Unitarian churches in Europe and America). One of the leading contemporary Czech Unitarians, Jaroslava Dittrichová, described the religion practiced in Prague during this period as being like a 'mixed grill’ and it very nearly caused Unitarianism to die out in the Czech Republic. (Hill et al. 2002, p. 197). Even after the fall of the Communist regime in 1989 the troubles of the RSCU were not over because this 'spiritually vulnerable situation’ made it possible for a man called Vladimir Strejcek to be accepted as the leader of their church in Prague at the beginning of 1991 with what Dittrichová calls 'all his irrational ideas’ (ibid.). Strejcek even managed to take over their building, a situation which was, happily, reversed by the courts in May 2000.

The damage these three hits had caused the community is clear. From the figure of about 8,000 members in the early 1940s the present day community of three Congregations (in Prague, Brno and Plzen) and one fellowship (in Liberec) now consists of only about 420 members.

As an admirer and, I hope useful friend of the RSCU and as someone who has written and spoken about them at various conferences what has been interesting for me is to see how the RSCU has responded to the Shoah and the period of Communist repression in order to survice and to give itself the strength to continue into the future. What has been its version of the 614th Commandment?

I offer their solution to the brutalities they experienced because it has helped them see the dangers of an attitude that has become very prevelant indeed in our own Western European and North American cultures - namely a radical secularism which aggressively privileges reductionist non-religious humanist accounts of reality which has become increasingly suspicious of all forms of religious expression and practice. In consequence we now have many in our societies who wish to abandoning or even ban 'God-talk’ entirely. Jaroslava Dittrichová, one of the leading contemporary Czech Unitarians, made these interesting comments during a Unitarian and Universalist theological symposium held in Oxford during 2000:

[B]elief in one God - is certainly the main Unitarian principle from the historical point of view. We think that this principle is one of the main principles also in the contemporary Czech Unitarianism. Many of you are of different opinion. Perhaps those of you who are non-theists do not find language about God useful. You may think the word God is much abused, and often used to refer to a kind of personal God. You may believe that the fruits of our life matter more than beliefs about God. This may be partly true, but there is a possible hidden danger in this idea. We who lived under the communist brand of totalitarianism were able to see and experience the consequences of a system without God, a system that considered man to be the centre of the world, without responsibility to something higher than himself - or even without a sense of responsibility to "the order of being." [. . .] We believe together with Vaclav Havel that in our contemporary world, we should respect what is beyond us. It seems to us that it is not important whether we call it the order of nature, the absolute or God. We are not afraid of the word "God." We use it because Dr. Capek and Dr. Haspl used this word in their sermons and books, and because the word "God" is used in other churches in our country which are close to us more now than at any previous time. We believe that a humanism which considers human beings the centre of the world without respect to something higher allows humans to be driven by their particular interests rather than governing their behaviour in a way that takes account of general interests. This results in the plundering of natural resources and other dangers existing in our civilization. What we have told you does not mean that we set belief in God against humanism. What we want to emphasise is that humanism should be open to transcendence. Such a humanism may be called religious humanism (A Global Conversation, A. Hill ICUU Prague 2002, pp. 197-199).

We may now return to Fackenheim's words and we can see that there are some very close parallels to the RSCU's response to the same events. Firstly the RSCU simply refuses to perish. Secondly, they, too, still remember in their guts and bones the memory of those they lost and particularly, lest his memory perish, Norbert Fabien Čapek. Thirdly they have refused to deny or despair of God. And, finally, they too, have refused "to despair of the world as the place which is to become the kingdom of God lest they help make it a meaningless place in which God is dead or irrelevant and everything is permitted."

In their own modest way the RSCU has also refused to hand to Hitler, the Nazi regime, or any other brutal regime, any posthumous victory.

May we, in our own witness in these (at present for us) safer times, keep in mind what we owe, not only to our Jewish brothers and sisters but to all who bore the brunt of such violence and hatred such as the RSCU, and never become indifferent to our own faith community's survival and our wider society's commitment to freedom of conscience and to real justice. But as we remember the brutalities of the Shoah may we also be careful to live, not out of any sense of victim-hood, but only out of the positive aspects of our faith namely the love of God and the love of neighbour and our world. Without such love, truly lived among us, we will ever risk allowing the seeds of another Shoah to be sown amongst us.